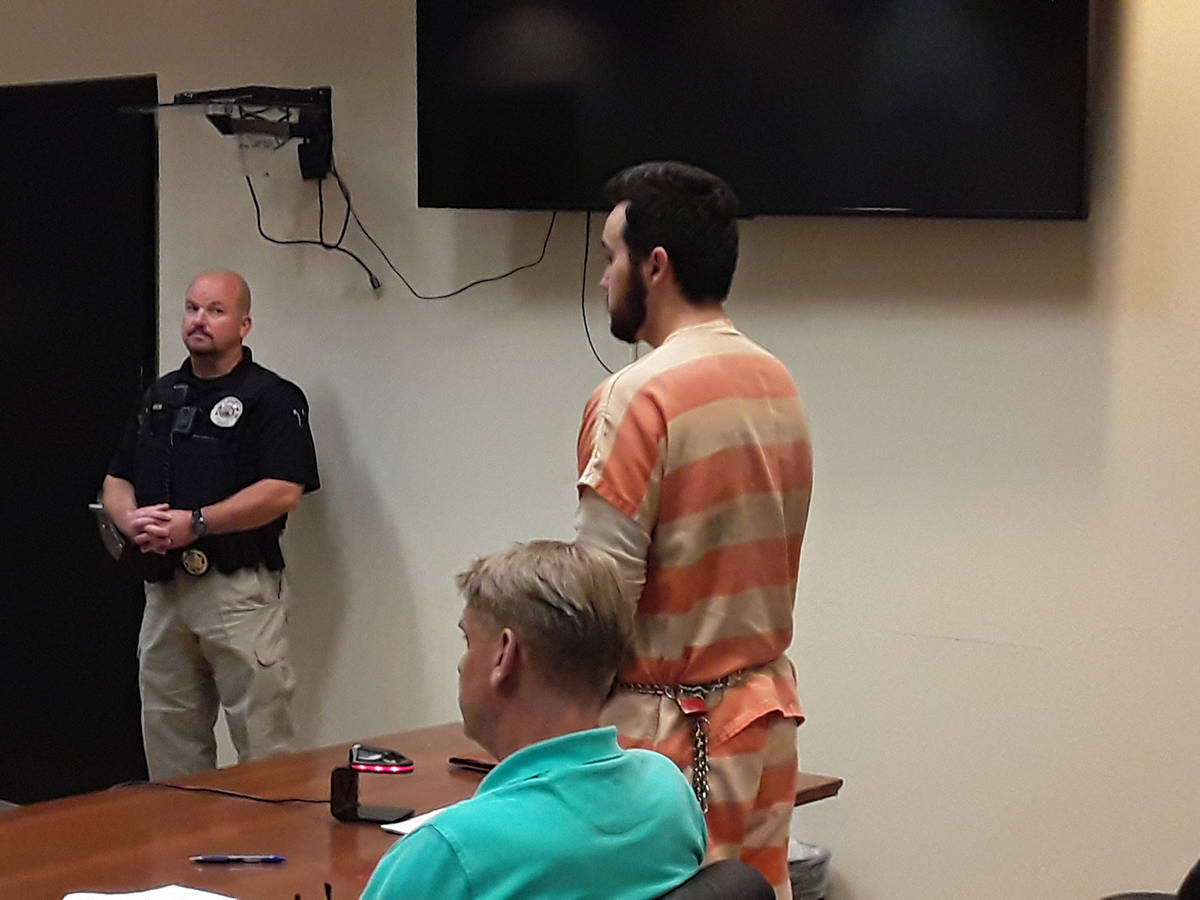 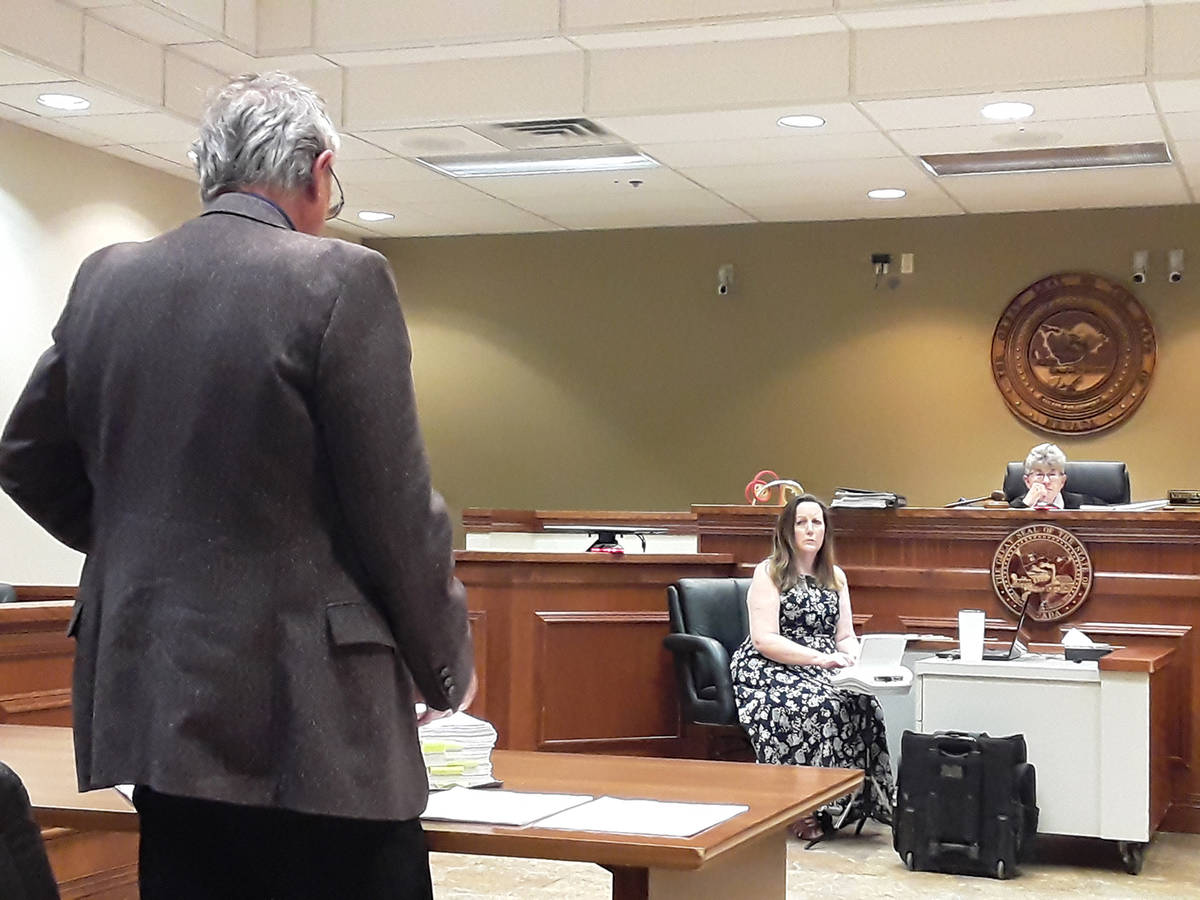 After initially deciding to face a trial on charges relating to the murder of his mother, defendant Dakota Saldivar went before Nye County Fifth District Court Judge Kimberly Wanker for a change of plea hearing on Tuesday, May 12.

Both Saldivar and his half brother, Michael Wilson, who also accepted a plea deal from prosecutors earlier this year, confessed to stabbing and beating their adoptive mother, Dawn Liebig, 46, to death because they did not like her parenting style, according to investigators.

Saldivar and Wilson were arrested in the early morning hours of Aug. 1, 2018 after they confessed to the murder.

Following their confession, the teens, who were 17 at the time, led authorities to a shallow gravesite not far from the Wedgewood Street residence, where their mother’s decomposing body was located, according to investigators.

“Mr. Saldivar, I have reviewed the guilty plea agreement before I came in today,” Wanker said in part. “The agreement is identical to the plea agreement that was offered and accepted by your co-defendant Michael Wilson. My understanding today, Mr. Saldivar, is that you are going to plead guilty to the charge of second-degree murder with use of a deadly weapon.”

Clad in an orange- and white-striped jail jumpsuit, Saldivar in a soft-spoken tone replied, “Yes your honor.”

Wanker explained to Saldivar that in exchange for his guilty plea, prosecutors would forego prosecuting any additional charges in the case.

The defendant also faced less serious charges, which included destroying evidence and conspiracy to destroy evidence, both gross misdemeanors, if the case went to trial.

Wanker noted that there were only two sentences for second-degree murder that the court can impose.

“If the court were to sentence you to the maximum on use of a deadly weapon enhancement, it would be eight to 20 years in the Nevada Department of Corrections,” she said. “If the court sentenced you first on the second-degree murder, the court will then sentence you on a consecutive enhancement. If I maxed you out, it would mean that you would have to serve a minimum term in the Nevada Department of Corrections, of at least 18 years before you would be eligible for parole.”

Additionally, Wanker said the penalty for the use of a deadly weapon enhancement charge could range from one to 20 years.

“What will happen is, at the time of sentencing, that the court will actually have a hearing during the sentencing and look at the different factors that I am required to examine pursuant to the statute and then I will make a decision.”

The hearing did not proceed without a few snags, as Saldivar expressed displeasure with the way his defense attorney was proceeding about the case in terms of the discovery process where both the prosecution and defense are required to exchange legal information, evidence and known facts of the case, where all parties involved can decide what their best options are, be it moving forward with a trial or negotiate an agreement.

Wanker expressed concern that Saldivar was not happy with Percival.

“I am trying to get you to articulate what you think your attorney could have done differently,” Wanker asked. “Are you unhappy with the offer from the state? I don’t want anyone in my courtroom to plead guilty just to get the case over with, because they think their attorney wants them to plead guilty.”

She went on to say that due to the seriousness of the charges, and the fact that Saldivar was not comfortable with pleading guilty, she would not accept his guilty plea.

“I only want people to plead guilty if they truly believe they are guilty, and for no other reason,” she said. “If you don’t think you are guilty of second-degree murder with the use of a deadly weapon, then by all means don’t plead guilty to it. If you don’t want to go forward with this, that’s fine with me. It doesn’t affect my life in any way. If we have a trial, that’s part of being a judge and I’ll move forward with the trial.”

In his response, Saldivar told Wanker that he personally did not like the guilty plea agreement that was offered.

“I personally do not like the deal, but I do not like trial,” he said. “I do believe that the deal would be in my best interest to accept, no matter how much I don’t like it. There is so much more that he could have done, and I do have to admit that I don’t know what he had done on my behalf because I was not present with him when he had conversations with Mr. Vitto. I just feel like there could have been more done.”

Saldivar went on to suggest that he felt he should have been more involved in the discovery process with his defense attorney.

“I would say he could have gone over the whole discovery that involved my case,” he explained. “There’s a part of me that feels like he hasn’t, but he says that he has, so I have to take his word on it. Having not really seen much of the discovery myself, I haven’t the slightest idea. I feel like my counsel hasn’t discussed every possible option for a different plea agreement when it came to conversing with Mr. Vitto.”

“Your honor, if I might, I should probably make a record at this point for everyone’s edification,” he said. “Mr Percival and I have had several conversations about this case. Mr. Percival has made manifest, in-depth, and detailed understanding of the discovery. He’s brought things to my attention that frankly I was unaware of that are part of discovery. He was actually able to enlighten me in certain areas. There is no doubt in my mind that he is very adept with the complete file.”

Vitto went on to say that Percival negotiated in depth, regarding what was available for his client.

“The offer that was extended to the defendant is the only offer that would ever be considered in this case,” Vitto argued. “In securing the negotiation that Mr. Percival was able to secure on behalf of his client, shaved off the potential for multiple years on an ultimate sentence.”

Benefits of a plea deal

Additionally, Vitto said the plea agreement would ultimately be in the best interest of Saldivar, in the eyes of the parole board.

“A plea is always going to be better received, as it demonstrates accepting responsibility for actions at a later date,” he advised. “A second-degree murder conviction that one has accepted responsibility for is always going to be better received by the parole board, than a first-degree murder conviction that was forced to go to trial, when perhaps the requisite amount of responsibility has not been taken for. That’s how I see the negotiations between counsel and myself.”

After taking Vitto’s argument into consideration, Saldivar then told Wanker that he would accept the plea deal.

“After hearing what Mr. Vitto had to say, it has reassured me that the doubt that I had has been taken care of,” he said. “It showed me that my defense attorney conversed with Mr Vitto about other options in terms of the plea agreement. I would like to accept this deal, your honor.”

Wanker then noted that Saldivar understood the nature of the offense charged, and the consequences of entering his guilty plea to the charge of second-degree murder with use of a deadly weapon.

“At this time Mr. Saldivar, I will accept your plea of guilty,” she said in part. “The court also finds that Mr. Saldivar has entered into a written guilty plea agreement and that he understands the terms of the agreement and further finds that he is knowingly, freely, and voluntarily entered into that agreement filed with the court today. This case is now going to the Division of Parole and Probation for the preparation of a pre-sentence investigation report.”

At the close of the hearing, which ran just under an hour, Wanker scheduled a sentencing date for Sept. 11, at 9 a.m.

It should also be noted that co-defendant Michael Wilson is scheduled for sentencing Friday, June 12, at 9 a.m. in Pahrump Justice Court Department 1, after entering into a plea agreement earlier this year.