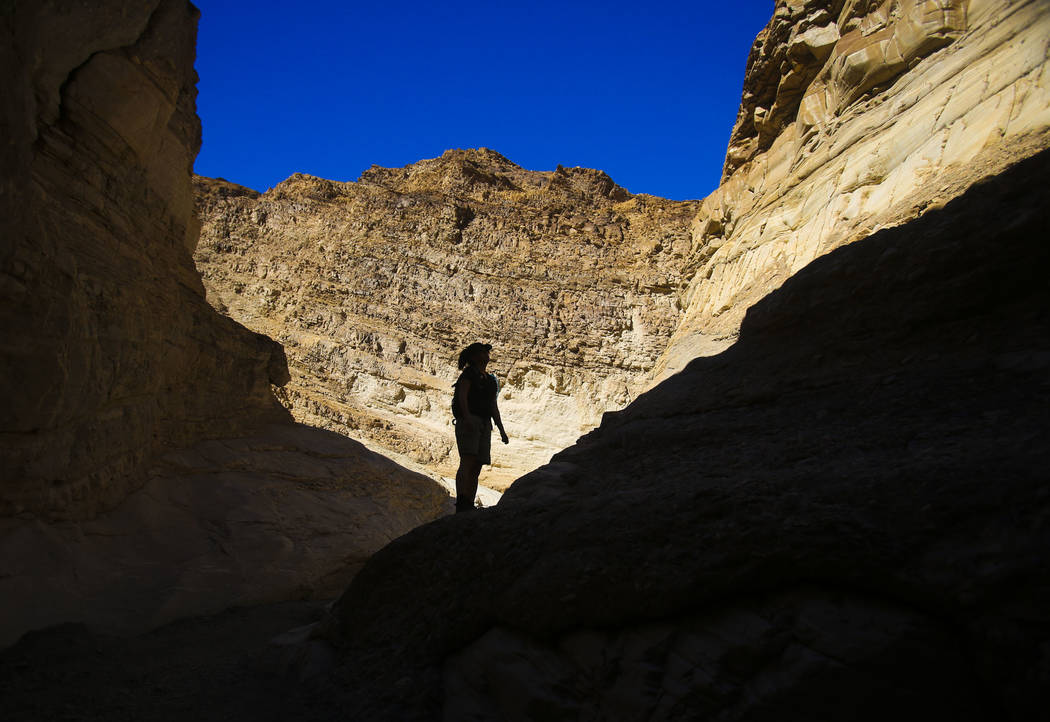 Jeff Scheid/Las Vegas Review-Journal Mosaic Canyon near Stovepipe Wells in Death Valley National Park as seen on March 10, 2013. The price for the Lifetime Senior Pass and the annual America the Beautiful National Parks and Federal Recreational Lands Pass will remain $80. 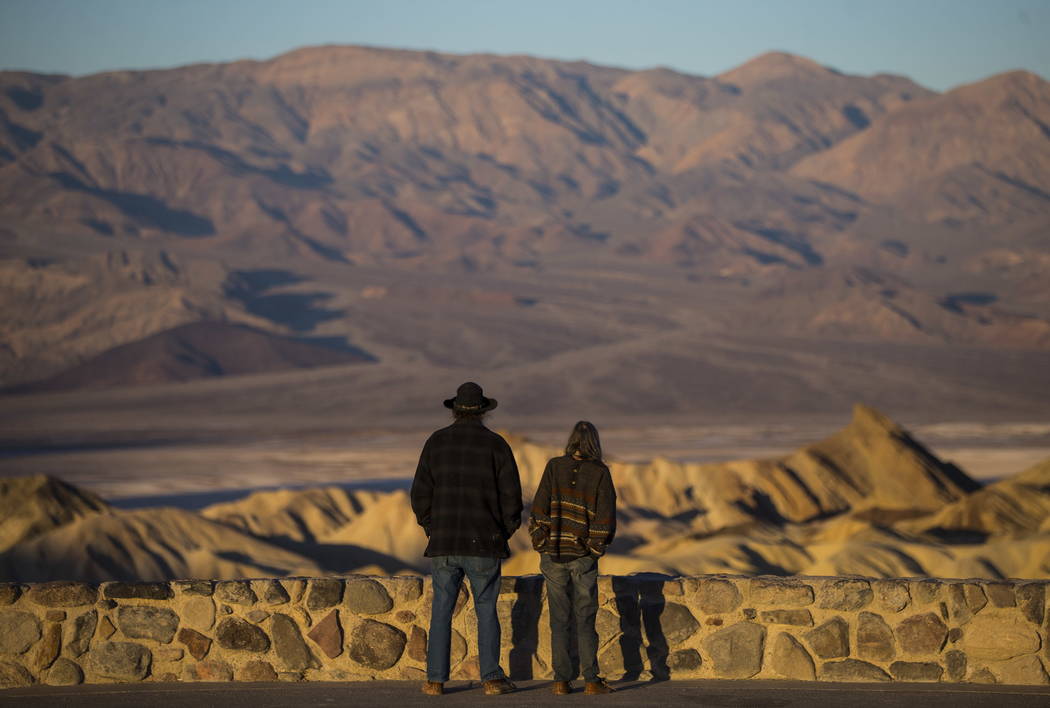 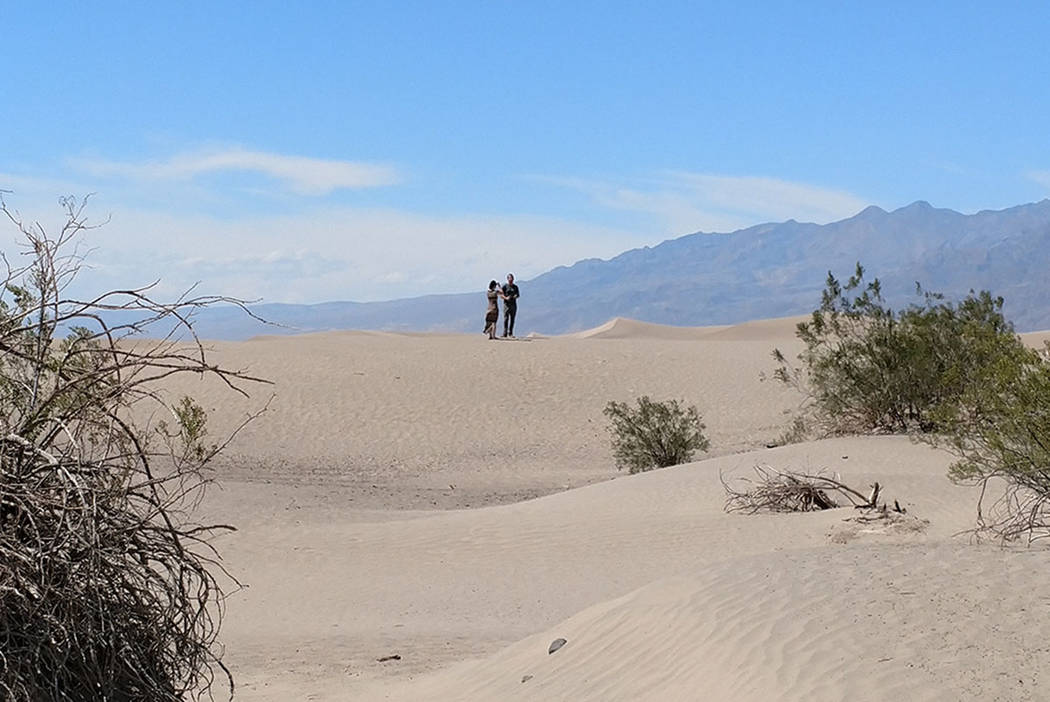 Mark Davis/Las Vegas Review-Journal Visitors hike up the Mesquite Flat Sand Dunes at Death Valley National Park in California on Monday, June 12, 2017. All of the revenue from the fee increases will remain with the park service, with at least 80 percent of the money staying in the park where it is collected.

Instead of doubling entrance fees at select high-traffic sites, the National Park Service announced plans to spread the pain systemwide.

Starting June 1, all 117 fee-collecting parks will charge an extra $5 for admission, including Death Valley, Lake Mead, Grand Canyon, Zion and other park sites in the Las Vegas vicinity.

Lake Mead National Recreation Area will see its seven-day entry fee go from $20 to $25 for passenger vehicles, from $15 to $20 for motorcycles, and from $10 to $15 for individuals on foot, bicycle or horseback.

The announcement was made April 12.

The fee increase does not apply to Red Rock Canyon National Conservation Area, which is operated by the U.S. Bureau of Land Management, or Great Basin National Park, which doesn’t charge for admission.

The price for the Lifetime Senior Pass and the annual America the Beautiful National Parks and Federal Recreational Lands Pass will remain $80.

In October, the park service proposed a dramatic, peak-season fee increase at some of its busiest and most iconic parks to fund improvements and boost revenue for the cash-strapped system.

Under the plan, entrance fees would have more than doubled to $70 per vehicle, $50 per motorcycle and $30 per person during the busiest five months at 17 parks, including Grand Canyon in Arizona; Joshua Tree, Sequoia-Kings Canyon and Yosemite in California; and Arches, Bryce Canyon, Canyonlands and Zion in Utah.

Park service officials said they switched to an across-the-board increase in response to public comments on the original plan, which was blasted by conservation groups and Democratic lawmakers.

Once fully implemented, the fee increase is expected to bring in an additional $60 million to a parks system that collected $199 million in entrance fees in 2016.

According to the U.S. Department of Interior, the nation’s 417 parks, monuments and historic and cultural sites need an estimated $11.6 billion to clear their growing list of deferred maintenance projects.

All of the revenue from the fee increases will remain with the park service, with at least 80 percent of the money staying in the park where it is collected.

“An investment in our parks is an investment in America,” said Interior Secretary Ryan Zinke in a written statement announcing the fee hike. “Every dollar spent to rebuild our parks will help bolster the gateway communities that rely on park visitation for economic vitality.”

Theresa Pierno, president and CEO of the National Parks Conservation Association, applauded the administration for listening to the public and abandoning its original proposal.

“Congress should commit to increasing park funding in future spending bills,” she said. “It also needs to go one important step further by enacting legislation like the National Park Service Legacy Act that would make substantial, sustainable and dependable investments in our parks.”

Zinke said the Trump administration is currently working with lawmakers on proposed legislation that would earmark some revenue from energy development on federal land for “National Park restoration.”

The move has drawn criticism from some conservation groups because it could make park improvements contingent on controversial and potentially destructive oil, gas and coal development.

The National Park system has seen record visitation in recent years, spurred in part by the service’s centennial celebration in 2016.

That was roughly 89,000 shy of the record of just under 331 million visitors set the previous year.