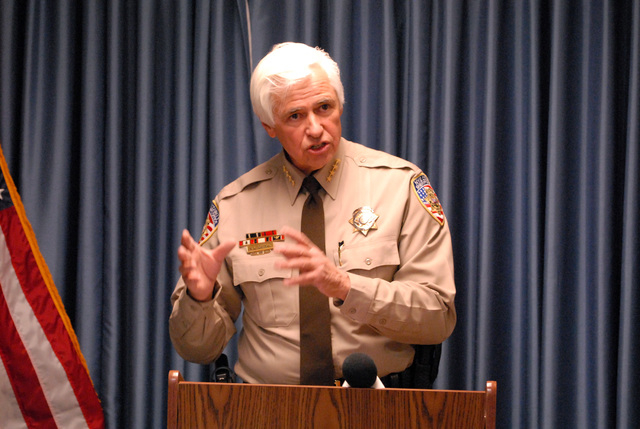 Sheriff Tony DeMeo attempted to head off an avalanche of bad publicity over his office’s handling of the recent drug arrest of one of its veteran patrol sergeants.

The sheriff says his office is investigating the source of information leaked to the Pahrump Valley Times regarding Sgt. Michael Horn’s Jan. 25 arrest and statements by other officers that his prescription drug abuse was an “open secret” inside the NCSO.

DeMeo held a press conference at 2:30 p.m. Tuesday to air concerns that those responsible for leaking the information to the press may have failed to report what they knew to superiors and thus violated department policy and the law.

“Members who have talked outside of these investigations have violated policy. There will be an extensive internal affairs investigation to find out who was the one who violated our policies and we’re going to find out if any deputy knew or had knowledge of Sgt. Horn’s illegal drug abuse. If they didn’t report that to a supervisor and they knew about it, they could be in violation of not only policy but criminal law,” he said.

The sheriff then went on to address several key allegations made in Friday’s PVT, including a report that in 2007 the NCSO received a tip from a Boulder City police officer that Horn had allegedly given a friend some pills and the man later had a medical emergency as a result. Also being probed is what if anything a subordinate told former Capt. Bill Becht last year about concerns regarding Horn and how he was handling prescription drugs being stored at the office.

“The officer (referring to the Boulder City officer), if he noticed this and he knew that there was a felony he had the duty to, he actually had an obligation to act,” DeMeo said. “I sent Sgt. Travis Huggins to investigate this allegation…Huggins came back and said we couldn’t find anything.”

DeMeo contradicted himself at the press conference. After Horn’s arrest, he told one local television station that there were no previous issues involving Horn and drugs. Now, he admits there was an investigation in 2007.

In regards to Becht telling the PVT he turned a 2013 complaint over to the narcotics unit for further investigation, the sheriff said he was never notified of the complaint.

“According to former Capt. Becht, he was alerted to suspicious behavior, according to the article, and turned it over to the narcotics squad…The problem with that was if it had come to my attention, I would have directed it to internal affairs not to narcotics…Why Becht decided it should go to narcotics, I don’t understand,” he said.

After DeMeo’s press conference, the PVT obtained two internal memos from confidential sources inside the NCSO that suggest the sheriff’s office was worried about the fallout from Horn’s arrest from the start.

First, on the day he was arrested, 17 staff members at the local Pahrump detention center were told that all queries related to the episode were to be directed to the sheriff.

That Jan. 25 memo reads: “Any questions about Michael Horn are to be addressed by the Sheriff only…Do not release the dec (declaration of arrest) or the photo (mugshot), direct everything to the Sheriff. Per the Sheriff.”

Not much about this memo is controversial. When the PVT called about Horn’s arrest the following Monday, a press release and mugshot were provided by the sheriff’s office.

A second memo, however, sent on Monday to the sheriff’s rank and file suggests that deputies who may have alerted the PVT to Horn’s long history of abusing prescription medication right under the noses of his superiors now face disciplinary action, including and up to termination.

Not only does the memo warn deputies of the consequences of their actions, but takes a few shots at the PVT.

“The recent article in the PV times (sic) authored by Matt Ward is, as usual, full of inaccuracies in his typical ‘tabloid’ journalistic style. I for one can tell you that there is indeed an internal investigation in this case which has started and is continuing. I can also guarantee ALL OF YOU that speaking (sic) to the press without authorization and relaying information about this case to them or anyone is a violation of policy,” states the order, written by Joe Close, recently appointed to head internal affairs.

One deputy familiar both with internal policies and with the Horn investigation said the memo illustrates the dysfunction inside the sheriff’s office.

“Instead of assuring us that they did not know about Horn’s activities, or tell us that we are free to come to them with our concerns and that they will take those concerns seriously, all they are saying is that we should shut up or face the consequences. Amazing, isn’t it?” said the source.

The Nye County Law Enforcement Association would not comment when an official was reached late Tuesday.

“Unfortunately, unlike the sheriff, I am prohibited by policy from discussing this with you,” said association President Det. David Boruchowitz.

Close’s memo outlines three policies that could be used to enforce the sheriff’s press blackout. They are generally broad missives. One states: “Members shall treat as confidential all matters relating to investigations, internal affairs and personnel.”

At the end of Close’s order, he concludes “in the politest way possible, I am saying please keep your mouths shut and you can thank Matt Ward and the Pahrump Valley times (sic) if this leads to IA’s (internal affairs investigations) or AA’s (administrative actions)in regards to you.”