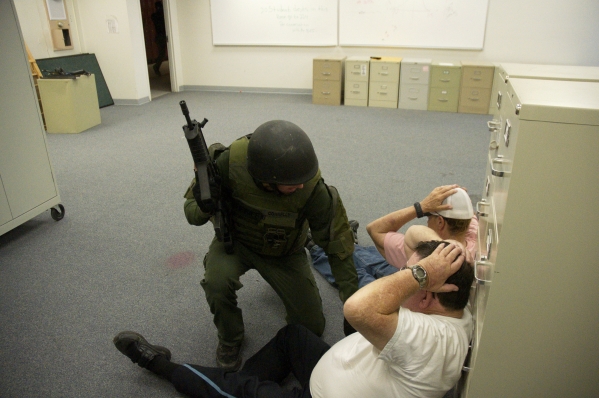 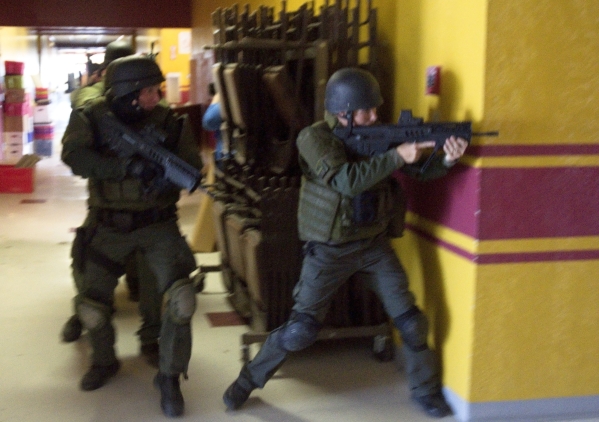 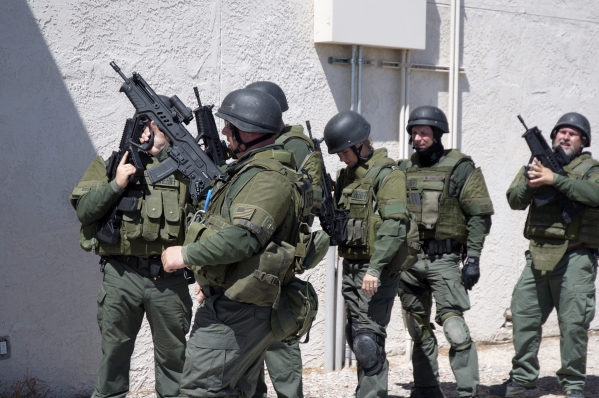 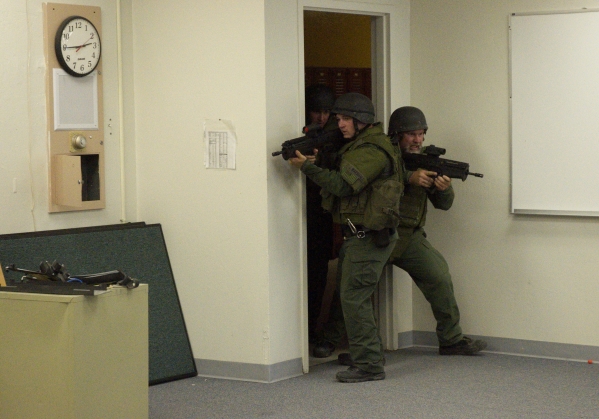 The situation had all of the drama of a real-life hostage crisis, but everyone went home safe and sound, following an active shooter training exercise conducted by Nye County Sheriff’s Office SWAT team members.

The three-day exercise focused on a school campus setting as it was held at the former Pahrump Valley High School Ninth Grade Academy on July 31 – Aug. 2.

Nye County Sheriff Sharon Wehrly said she wants to get officers trained on the latest methods used to thwart and mitigate such a situation.

“We are getting our SWAT team up to par with the newest tactics on how to protect our children and our teachers,” she said. “We were able to use the school so we were in the right environment for it.”

Wehrly noted the exercise included a realistic standoff between the suspect and SWAT team members, where the issue of time was an important factor.

“We had one active shooter plus hostages, of course it was all simulated,” she said. “We were able to get it down to actually about 15 seconds as far as saving children’s lives and the lives of faculty members. We had a new group that are very, very good teaching special weapons and tactics and they are called AGOGE. Since they have very recent experience, they were able to give us the latest and greatest information.”

Wehrly said the exercise was the first time the SWAT team has performed the training.

“They have done interdictions before, as well as responses to schools but it’s the first time that we have ever done it as a go, go drill,” she said. “Basically a go, go drill involves not wasting any time, because when you know you have an active shooter, you move.”

Wehrly also said officers are trained to mitigate the crisis as fast as possible, while noting there is no time for discussion with the suspect.

“By and large, active shooters are not interested in talking therefore the initial tactic is to take them down,” she said. “The more that you talk to them the more time it gives them to shoot people and hostages.”

The sheriff also provided advice for people who may find themselves in a hostage situation.

“They have to have a viable escape route and actually, the schools teach that,” she said. “They have an emergency plan which instructs them to run and have a place to go to.”

Additionally, Wehrly said would-be hostages also have to think one step ahead of the armed perpetrator.

“You also have to remember that active shooters are also terrorists,” she cautioned. “If they know where your emergency area is, they may have just set a secondary device there. If you have a shooter, you should go to a location you don’t normally use as an emergency evacuation area.”

Wehrly also noted that individuals should do everything they need to do to safely escape from the danger without delay.

“While they are actively escaping the shooter, they should just leave everything behind except for their car keys if they have them,” she said. “If you have your car keys with you, you are in good shape.”

Wehrly also said it’s imperative that when a hostage is making an escape, they should also know how to make the escape.

If running away is not an option, Wehrly said people should always have a “plan B.”

“If you can hunker down someplace where you’re basically out of harm’s way and out of the building, that’s really the best thing to do unless of course the active shooter is on the move because you won’t really be safe anywhere,” she said.

The sheriff also said she wasn’t opposed to another armed individual in stopping the bad guy.

“If there was somebody there with a gun and they were shooting at the bad guy, the bad guy would be dead before the cops even got there,” she said. “After that, they should put the gun down and their hands up.”

The same, she said, applied to those who are not armed during a hostage situation.

“If you were a victim in this, they don’t really know who the shooter is,” she said. “Sometimes they do, but most of the time they don’t. Anybody who is coming out of an active shooter hostage situation, they want to be sure that the police can see their hands or just lay down and that way, you won’t be perceived as a threat. If they tell you to put your hands over your head you should put your hands over your head because they don’t know who they are looking at, at the time.”

Friends and family of hostages are also advised to use common sense.

“The police officers are going to prevent people from entering the area because the first thing that they’re going to do is put up a perimeter but at the same time, with this new training, we are going to be able to move in immediately to cut the loss of life down.”

At present, the Nye County Sheriff’s Office has a total of nine SWAT officers.