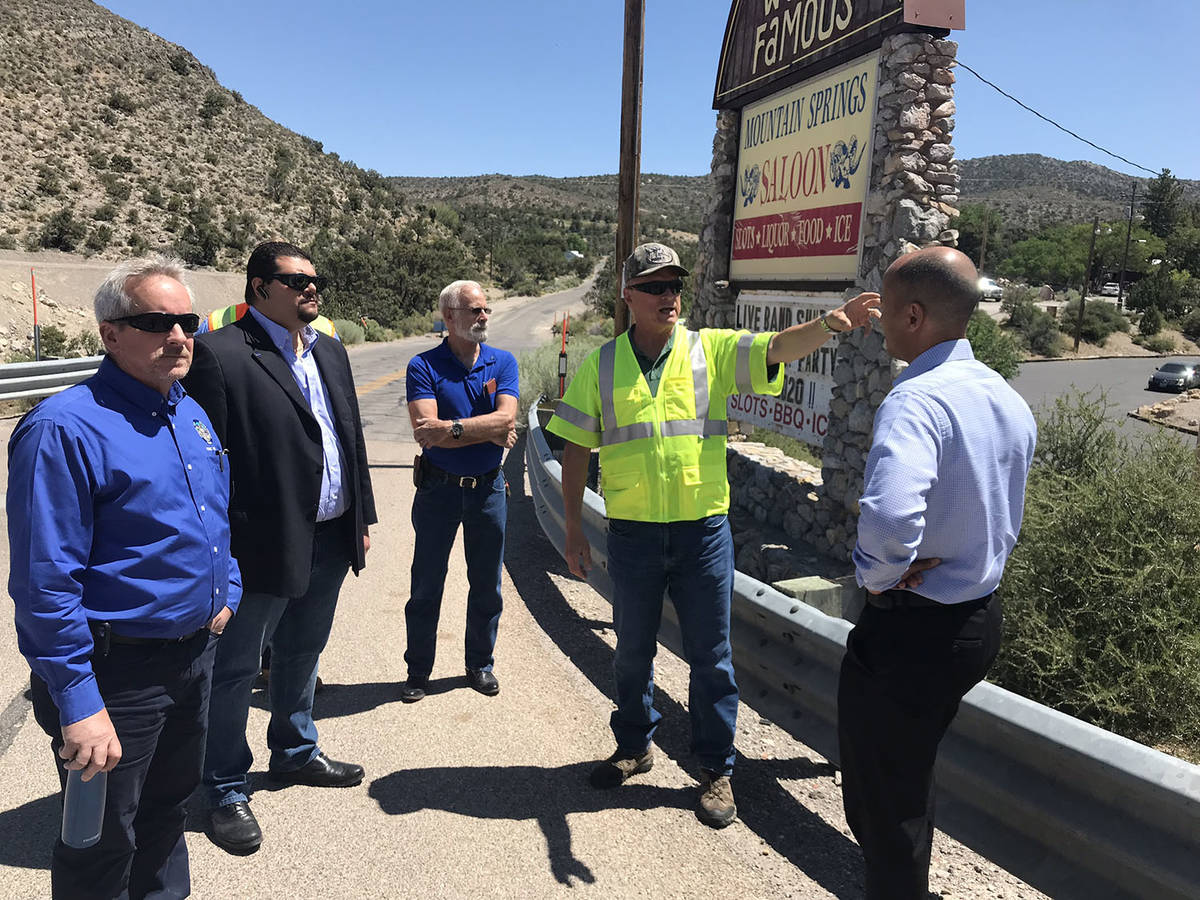 Special to the Pahrump Valley Times County officials were guests of the Nevada Department of Transportation on July 8, 2019 when they visited Mountain Springs for one of the last days of blasting during the Route 160 widening project, which NDOT recently announced has been completed.

The Nevada Department of Transportation announced the completion of its $59 million, two-year upgrade of state Route 160 in southwest Clark County, a critical stretch of rural highway which averages about 8,600 vehicles daily as it serves as the main travel corridor between Las Vegas and Pahrump.

Aggregate Industries SWR Inc. was the general contractor, with the CA Group responsible for the design, engineering and environmental work.

The project widened a 6-mile stretch of asphalt highway from two to four travel lanes between mile markers 16 and 22, creating a safe passing lane for slower moving traffic while altering the roadway geometry for fewer twists and turns. Work additionally entailed rehabilitating 22 miles of deteriorating roadway from roughly the Nye County line to the Mountain Springs community.

This vital route serves as a crucial economic link between Las Vegas and Pahrump. Rapid development, additional residents and increased travel has ratcheted the need for freeway improvements. This project subsequently expanded the roadway while enhancing motorist safety for improved mobility and reliability.

“We are thrilled for the recently completed $59 million upgrade of state Route 160,” said Arlette Ledbetter, Pahrump’s tourism director. “This route is the most scenic route to Death Valley National Park, and at a time when people are looking for social distancing this meets the criteria.”

Construction proved tricky because of the needed removal of some stubborn fractured bedrock through Mt. Potosi for the expanded highway. The contracting team consequently undertook 58 blasting events that necessitated temporarily shutting down the highway in both directions, ranging from 30 to 120 minutes, while crews placed explosives, checked the blast area and cleared any stray rubble and debris.

Additional improvements called for new cattle guards and an underground wildlife undercrossing near mile marker 18, with 10 miles of combined deer and tortoise fencing. Crews placed 590 boulders, 14,000 cubic yards of riprap and 1,706 tons of decorative rock for landscaping and aesthetics that also helps with erosion control and stormwater runoff. The project additionally placed flood control channels, box culverts and 6 miles of storm drainage pipe up to 4 feet in diameter.

“Completing the SR-160 widening project is an investment in Nevada’s roads connecting Las Vegas to Pahrump, which is the gateway to Death Valley,” said Nye County Commissioner Leo Blundo. “We now sit a safe and comfortable ride away, just as it is driving from Henderson to Summerlin.”