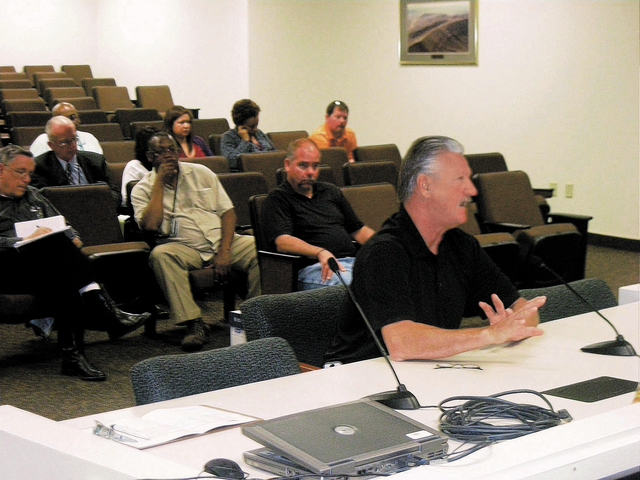 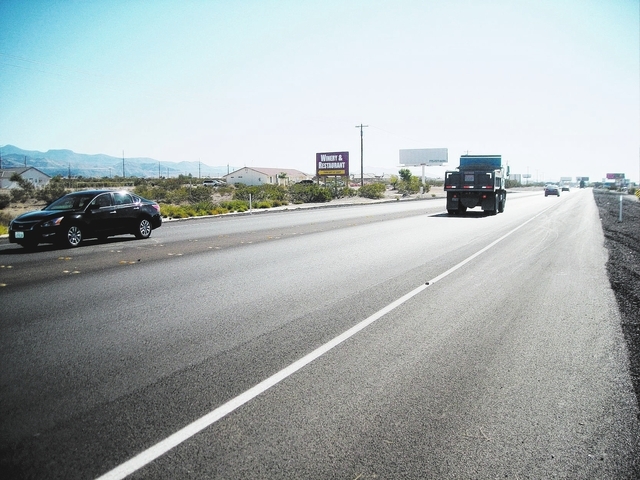 Nye County Commission Chairman Butch Borasky said he wants instructional videos for Pahrump drivers to learn how to navigate roundabouts, as planning for them on Highway 372 intersections at Pahrump Valley Boulevard and Blagg Road moves forward.

Borasky said the videos would show how to drive into a roundabout, how to get out and where to yield to traffic. There would also have to be aerial views.

“These have to have some very good detail because about 40 percent of our population is seniors,” Borasky said. He added many of those drivers are “quite nervous” about the proposal.

Motorists could also be steered to alternative routes around the roundabouts, he said, though Highway 372 is the only road west to Shoshone, Calif.

Borasky said residents of the Comstock Park mobile home park are very nervous about the roundabout adjacent to their subdivision on Highway 372 and Blagg Road. He asked Nevada Department of Transportation officials at a Wednesday workshop about setting up a meeting with those residents.

County and NDOT officials recently visited the roundabout locations. NDOT planner Jim Ceragioli said the state is moving forward to do the roundabouts as quickly as possible, but some right-of-way problems haven’t been ironed out yet. NDOT officials are presently in the process of putting together agreements for Nye County contributions to the roundabout project, he said.

Last June, county commissioners voted 4-1 to endorse the two roundabouts after a recommendation from the Capital Improvements Plan advisory committee and provide $900,000, NDOT will fund the other half. Commissioner Frank Carbone voted against it. The Homestead Road traffic light cost $2.3 million. Public Works Director Dave Fanning said roundabouts would also cost only about $5,000 per year to maintain, as opposed to $22,000 for a traffic light.

The planned Pizza Hut targeted for the old Romero’s Express Restaurant at Highway 372 and Pahrump Valley Boulevard was held up by the roundabout plans, but County Manager Pam Webster said the company is happy with the latest plans, which would have originally reduced the area for their drive-through. Webster said Pizza Hut now hopes to begin construction in the first half of 2014.

On other matters discussed at the workshop, NDOT planner Jason Van Havel said local communities can be reimbursed for 95 percent of the capital investments in a bus or 50 to 75 percent for the costs of operating a transit service. Borasky said he’s already been working with Michelle Gardner from the NDOT rural transit program, about a public transportation system in Pahrump. He wants to bring members of a NyE Community Coalition transportation committee that is working on a Pahrump public bus system, to the next Regional Transportation Committee meeting in January.

The county could provide in-kind services like storage at a bus yard, mechanic services and provide advertising on the side of the bus to reduce the county’s matching costs which Borasky said could total $150,000.

“We’re one of the few areas in the country that has 30-plus thousand people and no public transportation,” Borasky said. But he added county commissioners haven’t shown an appetite to subsidize such a system with tax dollars, he’d rather hire a contractor to operate it.

Proponents hope to eventually start up a Pahrump bus system with four buses running two routes 14 to 16 hours per day.

Commissioner Dan Schinhofen complained the planned widening of the remaining two-lane section of Highway 160 between Pahrump and Las Vegas, the eight-mile section between Trout Canyon Road and Calvada Boulevard, was formerly listed as a long range project but wasn’t on the list at all that NDOT presented Wednesday.

Borasky asked whether widening Highway 160 all the way north from Boothill Lane in Pahrump to Highway 95 was part of the NDOT long range plan. Van Havel said it wasn’t in their five to 10-year plan.

“We’re going to get it four lanes all the way into Clark County first and then a longer element is going to be extending that north,” Van Havel said. But he indicated even widening that eight mile strip south to Las Vegas wasn’t a high priority for NDOT. “The available funding on addressing this issue with 160 in general versus the priorities of the rest of the state, we find ourselves in an extremely challenging situation and we’re trying to do what we can on it.”

While motorists complain about the lack of traffic lights here, Ceragioli indicated Pahrump may be a lesser priority when it comes to critical emphasis areas, which are identified by crash data as having the most fatalities and serious injuries. He said the Las Vegas Valley has over 700 locations with 30 or more crashes per year.

Van Havel said the top category for NDOT is the interstates, followed by state roads. The southern part of Highway 160 would be considered a second priority, but north of Pahrump up to Highway 95 where there is less traffic would be part of the third priority of projects, so would Highway 372 going into California.

Schinhofen outlined a couple of items on his wish list. He briefed NDOT on his request for the U.S. Department of Energy to provide funds to widen Highway160 up to Highway 95, as a condition of shipping nuclear waste through Pahrump. Lately the DOE outlined plans to ship more highly radioactive uranium 233 and 235 through the area for disposal at the Nevada National Security Site which Schinhofen said would save DOE $600 million from storing it at Oak Ridge, Tenn.

The DOE could also help fund a Pahrump beltway project, Schinhofen said. Maps presented to the Regional Transportation Commission Tuesday show a potential east side beltway loop extending as far east as Higley Road, then down to Manse Road and an airport southern beltway loop coming up from Kellogg Road to Highway 372.

Schinhofen added he’d like to see a straight route from Pahrump to the Front Sight Firearms Training Institute. Instead of continuing Hafen Ranch Road straight south past Hafen Elementary School, through “The Village,” on the old State Route 16 Schinhofen would prefer constructing a route a mile west of there, going south along the power lines from Indian Reservation Road.

“That’s something that’s been important to me to connect Front Sight Road with Pahrump,” he said.

NDOT told Nye County officials there is a new Local Public Agency program that allows the county to provide some of their review and administration, which could speed up transportation projects, though they would still have the same delays with environmental issues and right-of-way agreements. They were also told about a new state law which allows NDOT to enter into negotiations to relinquish state roads to county jurisdiction.

Schinhofen said the culvert that clogged up with debris causing Highway 160 to flood the weekend of Aug. 31-Sept. 1 still hadn’t been cleaned up. He said it closed the main highway coming into Pahrump.