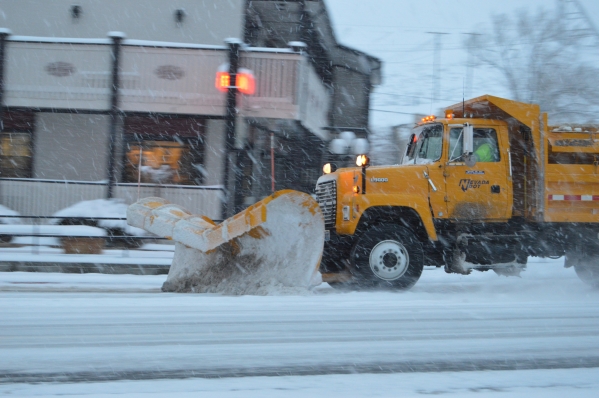 While Pahrump was dealing with heavy rain and wind last weekend, a storm of historic proportions went through Tonopah dumping a near-record amount of snow, causing various issues in the area.

The National Weather Service said that a foot of snow fell on Sunday, which was the second most accumulation of snow that Tonopah has officially seen.

“It was the second largest storm total in Tonopah on record with 12 inches of snow,” said a National Weather Service meteorologist. “The only event that was higher than that was 16 inches back in 1946.”

Various county buildings were closed as result of the storm, mostly for safety concerns.

“The board of commissioners met this morning in an emergency meeting and they voted to close the Tonopah Courthouse for today,” said Joni Eastley, assistant county manager. “There were some very high drifts in front of the building that would have been almost impossible to get through. The parking lot was just impassable.”

The unusual amount of snow also forced schools in Tonopah and Goldfield to close for the day as well, so kids got an extended weekend.

Schools reopened Tuesday, but two hours later than usual, to allow time for road crews to adequately clear roadways, as set out by the weather delay and closure guidelines for the school district.

Eastley herself was unable to leave her home, as she was blocked in by the snowfall Monday morning.

“I can’t get out of my house, I am snowed in,” she said Monday morning. “So I haven’t been able to get to the top of my driveway. I’m stranded up here.”

That amount of snow gave road crews more than enough work to do, as they scrambled to open the roads to those motorists who had to brave the conditions as the work week began.

“NDOT maintenance crews had to plow a foot of snow with two-foot-high snow drifts Monday afternoon along on State Route 375 from Warm Springs to the Queen City summit,” said Tony Illia, Nevada Department of Transportation spokesman. “U.S. 95 was never closed, although crews had been operating snow plows for 40 straight hours while also battling ice.”

The National Weather Service said that dryer, cold conditions were expected the rest of the week, as the storm moved off to the east.

“The storm moved to the Four Corners region, and you’re going to be hearing more about this storm on the news,” the NWS said.