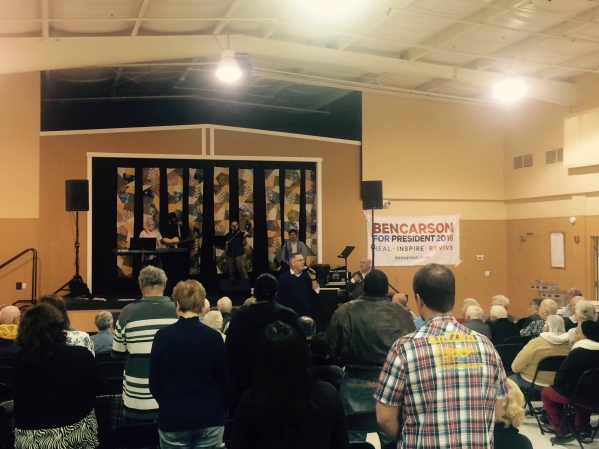 Participating in the Nevada 2016 caucuses isn’t as simple as filling out a ballot in the voting booth. But it’s not intended to be shrouded in mystery, either, caucus officials from both political parties say.

The first potential swing comes in the caucuses, when voters from both parties will voice their choices for the Republican and Democratic nominations for president. Its decisive role cannot be understated, and it’s why Nevada voters get the treat of seeing a constant flood of visiting candidates.

Scenarios could unfold in different ways.

The second potential swing will come on Election Day in November, when purple states’ voters will cast ballots that might sway the Electoral College. Purple states are those with a blend of Republican and Democratic support.

To participate in the February caucuses, voters must pick a party.

For both parties, it will be the first early voting state in the West.

Here’s what Nevadans can expect when they caucus:

There are 1,785 precincts throughout Nevada, and each will have its own caucus meeting. Both political parties have reserved community centers, schools and other spots.

In some instances, the same building might hold multiple precinct meetings in different rooms.

To participate in the GOP caucus, voters must be registered as Republicans by Feb. 13. That’s a key difference from Nevada Democrats, who allow voters to register on caucus day.

The caucus is Feb. 23. Evening meetings will start between 5 p.m. and 7 p.m., depending on the location, and must end by 9 p.m. In most spots, officials expect the process will finish within an hour.

Caucus participants will get a ballot. They can mark the ballot with their candidate preference at the meeting’s start, or they can wait until the end of the meeting and hear pitches by supporters for the various candidates, said Greg Bailor, Nevada Republican Party caucus director.

Nevada Republican Party Chairman Michael McDonald said, “It’s an honor to be the first in the West, and we take it very seriously. We have staff members on the ground who are more involved this time.”

The goal is to make the selection process accessible, with information on a website and staff members getting the word out, he said.

Once registered, voters can enter their addresses and information into a database and find their caucus location. Military members who are Nevada residents can cast absentee ballots.

McDonald expects the caucus to be a “spirited event.”

It also will be the first entry that participants have into the delegate world, and a potential shot at traveling to the Republican National Convention as a national delegate to cast a nomination vote. Each precinct picks delegates who go on to their county convention. At the county conventions, delegates are picked to move to the state GOP convention in May. At the state convention, delegates and alternatives get elected to go to the Republican National Convention in July, when the GOP will officially nominate its presidential candidate.

By then, it’s often a foregone conclusion who will be the nominee, because many states will have cast ballots in primaries and caucuses. But in Nevada, candidates in February face the task of securing precinct-level delegates who support them and are willing to move up the ranks.

Clark County GOP Chairman Ed Williams said the organization has been conducting caucus training “all over the county” and is training upwards of 500 people.

The party also reaches out to groups that aren’t necessarily known for Republican ties and goes where invited, he said, including Planned Parenthood and the AFL-CIO.

“We’re just trying to reach into groups we’ve not been good at reaching out to before,” he said.

Procrastinators can complete their voter registration as Democrats at their caucus location. Party leaders also allow caucusgoers to register in advance. Like the Republicans, Democrats have an online caucus tool to help users find where to caucus.

The Democrats will caucus at noon on Feb. 20, a Saturday. They will also recommend people arrive at 11 a.m. so they’re registered and ready by noon.

From there, the caucus is about talking with others and making a decision openly — not voting by private ballot.

“It’s engaging,” said Cory Warfield, presidential caucus director for the Nevada Democratic Party. “It’s different than going to a ballot box. The caucus is really about that grass-roots approach to politics and having the opportunity to talk and have a conversation with your friends.”

The Democrats have fewer candidates to scrutinize than Republicans. The contest is among three: former Secretary of State Hillary Clinton; U.S. Sen. Bernie Sanders, an independent from Vermont; and former Maryland Gov. Martin O’Malley.

People will have 15 minutes after their meeting starts to pick a candidate. They can talk to supporters of other candidates and choose one, moving to a designated area so supporters group together.

Thus begins what’s called the “original alignment” of support. The formula, based partly on the number of registered Democrats in a precinct, will determine whether a candidate’s group has enough support to be awarded any delegates.

But voters who land in groups that qualify for at least one delegate in the first round cannot change their choice in the second round.

To demystify the process, the party has held “mock caucus” events throughout the state. But voters don’t need to participate in a mock caucus to do the real thing.

For both sides of the caucuses, the political parties, not the secretary of state or government elections officials, organize events and tabulate results.

Nevada Democrats who caucus can join more than 12,000 precinct-level delegates, who will then go the county convention April 2. If their county organization picks them, the delegates move on to the state convention. In the end, the state sends 43 delegates and three alternates to the Democratic National Convention in Philadelphia in July. That figure includes elected officials and unpledged party leaders who are delegates.

“Every time you do a caucus, you want to make it a little better,” Lange said.

Nevada gives Democratic candidates an early opportunity to see how they fare with a diverse electorate. As the third state, Nevada could be an early tie-breaker if one candidate does well in Iowa and another fares better in New Hampshire.

“When they come to Nevada, we could be the firewall,” Lange said, “or we could be what gives a person an opportunity to break out.”

Contact reporter Ben Botkin at bbotkin@reviewjournal.com. Find him on Twitter: @BenBotkin1. This article first ran in the Las Vegas Review-Journal on Jan. 31.