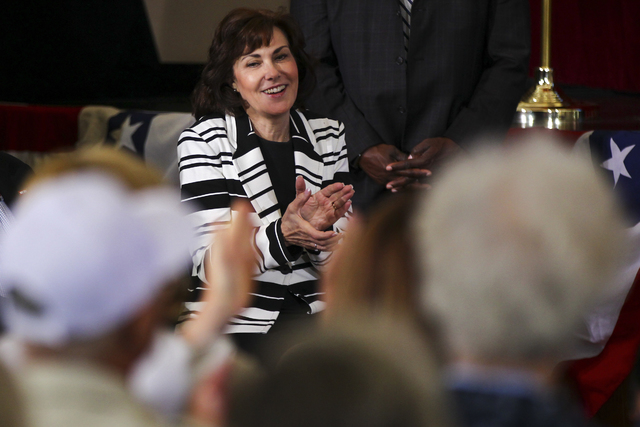 Chase Stevens/Las Vegas Review-Journal Jacky Rosen as shown in a 2016 photo. Rosen and the rest of the delegation learned earleir this month when they learned that no funding for Yucca Mountain was made in the omnibus spending package that will fund the federal government through September.

“The Nevada delegation, except Mark Amodei, we all stand together,” she said earlier this month, referring to Nevada’s second U.S. House representative.

Rosen and the rest of the delegation received good news when they learned that no funding for Yucca Mountain was made in the omnibus spending package that will fund the federal government through September.

In March, President Donald Trump released a “skinny budget” proposal for fiscal year 2018 — which begins in October — that included $120 million to restart the licensing process for Yucca Mountain.

The omnibus spending decision was made after four members of the Nevada delegation — Rosen, plus U.S. Rep. Dina Titus, D-Las Vegas; U.S. Rep. Ruben Kihuen, D-North Las Vegas; and U.S. Sen. Dean Heller, R-Nevada — all spoke against the Yucca Mountain repository in a hearing before the House Energy and Commerce Committee.

“I was lucky enough last week to testify before the (U.S. House) Energy and Commerce committee. I think they heard us because the funding for Yucca Mountain is not in an omnibus bill,” Rosen said on Nevada Newsmakers.

Rosen added that the working relationships among the three Southern Nevada members of the U.S. House — all Democrats — with senators Heller and Catherine Cortez-Masto, D-Nevada, are good.

“I think you are going to see other issues with the three of us in the south working with our two wonderful senators,” Rosen said.

Rosen was asked twice on Nevada Newsmakers about reports she may consider running for the U.S. Senate against Heller in 2018 but did not directly answer.

“I will leave it to the pundits,” she said when first asked. “They all like to speculate on who is going to run for what office and when they are going to do it.”

When asked again, she said, “I am Nevada’s biggest champion. I am just going to keep my head down and keep doing what I am doing.”

She said she had plenty of positives from her first term to run for re-election.

She pointed to her introduction of a bill designed to restore internet privacy as one of her accomplishments.

“I also helped put forward a bill that protects faith-based communities,” Rosen said. “So we’ve got extra funding for protection from acts of hate and violence. I am very proud of that because I want to stand up against hate wherever we find it and protect some of the most vulnerable communities.

“We also have helped on some bipartisan legislation on Israel where we can help move forward funding for anti-missile defenses,” Rosen said. “They (Israelis) are our biggest ally in the region, in the Middle East, our biggest ally for the safety and security of our own troops and so I feel that is really important.”

She also gave a hint about what she would work on if she continues to be a member of Congress after the 2018 election.

“Some of the things I hope to be working on are in the solar, water and energy areas,” she said. “I always say that in the center of my district stands Hoover Dam, one of the greatest marvels of the last century, still producing energy today. So I want to see what Southern Nevada can do in the areas of water and energy going forward in the future — with STEM (Science, Technology, Engineering and Math) education and with our new drone port going up in Boulder City.”