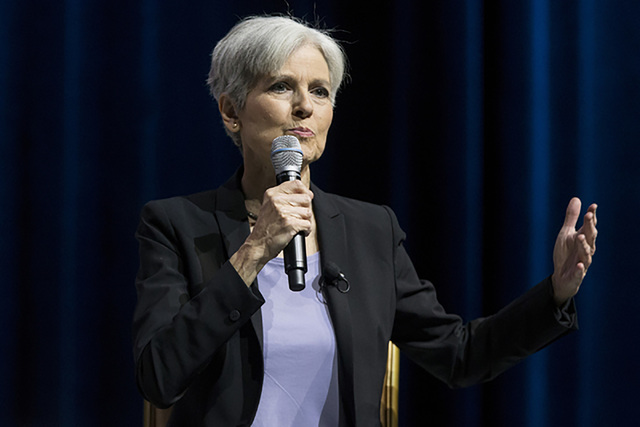 Occupy the Debates will protest Wednesday outside the presidential debate the exclusionary debate system established by the Commission on Presidential Debates, which prevents third-party candidates such as Green Party candidate Jill Stein, pictured, and Libertarian candidate Gary Johnson from participating in the debates. Special to the Pahrump Valley Times

The Nevada Green Party plans to participate in the organized protest ahead of the last presidential debate in Las Vegas on Wednesday.

The event is organized by the Coalition of Concerned Citizens, organizations including the Nevada Green Party, All Shades United, a community group that wants to unify racial and ethnic groups, and Reuben D’Silva, a candidate for Congress in Nevada’s District 1.

Occupy the Debates is a protest of the exclusionary debate system established by the Commission on Presidential Debates, according to the Nevada Green Party’s press release.

“We want to educate the public about the current corruption and lack of democracy in this election, which includes voter fraud and suppression, election rigging, etc. and the exclusion of two viable candidates, Gary Johnson and Jill Stein,” Green Party Southern Nevada Co-Chair Kim Borghese said. “We also want to express the need to get the money out of politics, enact electoral reforms that create a more representative democracy, such as public campaign financing, ranked-choice voting proportional representation, and open debates.”

The Commission on Presidential Debates is a private, nonpartisan organization. According to its guidelines, a presidential candidate has to poll at 15 percent of the national electorate as determined by five selected national public opinion polling organizations.

Borghese questioned national polls and said voters have a right to hear from all candidates.

“The national polls are questionable,” she said. “There are five major polling agencies or networks that are owned by corporations that support the two-party system. The poll questions often do not reflect the whole population (i.e. not polling 18-35 year-olds) or leave out questions about third-party candidates.”

Stein will appear on the ballot in 47 states and Washington, D.C. She was denied ballot access in Nevada after a federal judge declined the Nevada Green Party’s request to put Stein on the ballot in the Silver State. Nevada doesn’t have a write-in rule.

Stein is also not on the ballot in Oklahoma and South Dakota.

“The right to make an informed choice is central to the preservation of American democracy – without the free exchange of ideas you cannot have a free society. This demonstration is a coalition of many concerned citizens and organizations coming together to protest the exclusion of a great portion of the American electorate,” the Green Party press release said.

Republican Party nominee Donald Trump and Democratic Party nominee Hillary Clinton will participate in the presidential debate, which will take place at the University of Nevada in Las Vegas on Wednesday.

The protest will take place on Wednesday, from 4 p.m. to 8 p.m. at the Thomas and Mack Center in Las Vegas, located at 4505 S. Maryland Parkway. Protesting and speeches will start in the free expression zone at 4700 Paradise Road.