Gabriella Benavidez/Las Vegas Review-Journal Preliminary data shows that 303 traffic fatalities occurred on Nevada roads in 2017. This photo was taken at the scene of a fatal wreck in Southern Nevada in October. 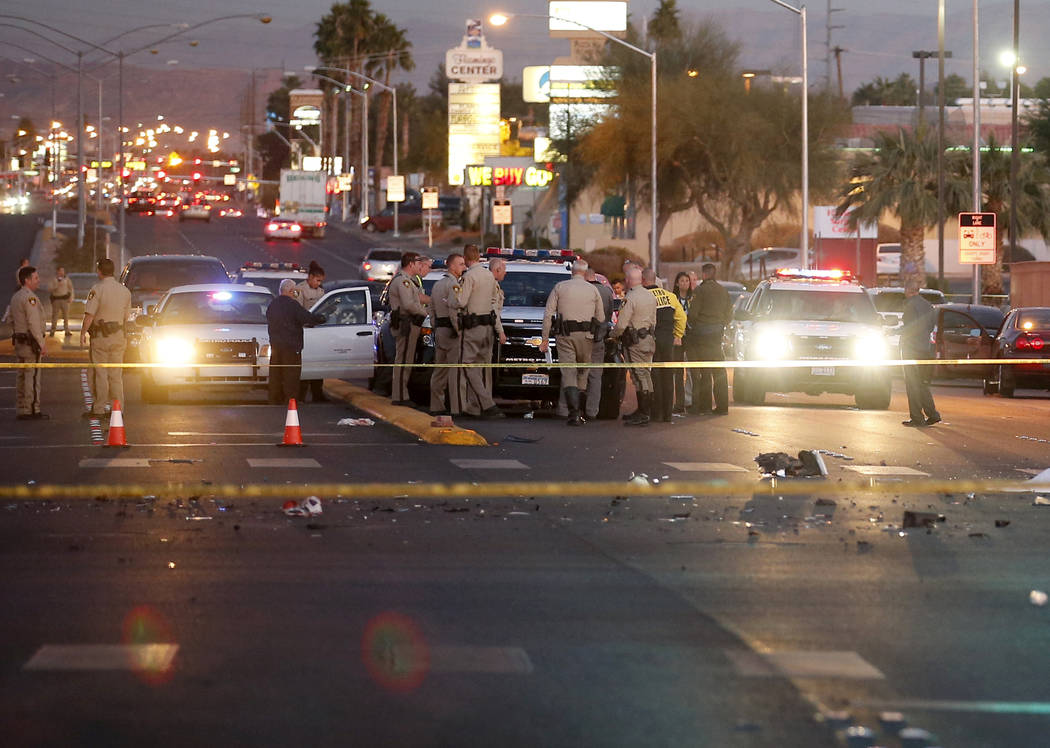 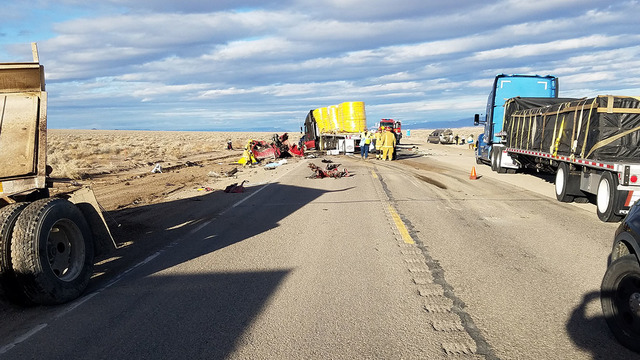 David Jacobs/Pahrump Valley Times A look at the scene of the multi-vehicle fatal wreck on Feb. 8, 2017 along U.S. Highway 95/6 between Tonopah and Coaldale Junction in Esmeralda County. Two people in a pickup truck were killed.

The Nevada Departments of Transportation and Public Safety are reminding Nevadans to share the road after Nevada pedestrian traffic deaths rose in 2017 amid a decline in overall statewide traffic deaths.

Preliminary data shows that 303 traffic fatalities occurred on Nevada roads in 2017, down from approximately 330 deaths the previous year, NDOT said this week.

The decline in traffic fatalities marks the first time since 2013 that traffic fatalities were fewer than the previous year in Nevada. Total year-end traffic deaths could be adjusted based on ongoing traffic crash investigations.

While overall traffic fatalities declined, the number of pedestrian deaths jumped from 80 pedestrian fatalities in 2016 to 99 in 2017.

Bicyclist deaths also rose from six in 2016 to nine in 2017. The largest spike in pedestrian deaths occurred in Clark County, where 78 pedestrians lost their lives in 2017, 21 more than in 2016.

“Every death on Nevada roads is a tragedy, and a loved one who will not be coming home,” Nevada Department of Transportation Director Rudy Malfabon said.

“Ultimately, our goal is zero fatalities on Nevada roads. Transportation and safety agencies across Nevada will continue working every day to save lives on Nevada roads, but we also remind every driver, every pedestrian, every bicyclist and motorcyclist to always share the road,” he said.

NDOT said that it dedicates approximately $10 million every year to pedestrian safety projects on state roads. In 2017, crossing signals and other pedestrian safety enhancements were installed on East Charleston Boulevard and Boulder Highway in Las Vegas as well as Kietzke Lane and North Virginia Street in Reno.

In addition, nearly 30 sidewalk decals were installed in the Reno area featuring imagery such as a shark-infested ocean with the message “Crossing distracted is just as deadly.” The hair-raising images are meant to remind pedestrians that crossing area roadways without paying attention can be perilous, NDOT said in its statement this week.

The efforts join local improvements to enhance pedestrian safety in cities and counties across the state.

“We focus on the driving behaviors and issues that led to the most deaths and injuries on Nevada roads,” NDOT Chief Traffic Safety Engineer Ken Mammen said.

“Our goal is cutting the yearly traffic fatality average in half by 2030, with the ultimate goal of zero fatalities on Nevada roads,” he said. “And we do that through the enforcement, engineering, emergency medical response and public education strategies defined in our Nevada Strategic Highway Safety Plan.”

Nevada Highway Patrol Trooper Dan Gordon said: “We work every day to help everyone be safe on the road. But ultimately, we know that reaching zero fatalities relies on each and every person on the road, and we want to remind everyone to always be safe on Nevada roads.”

To learn more about Nevada traffic safety, log on to www.zerofatalitiesnv.com