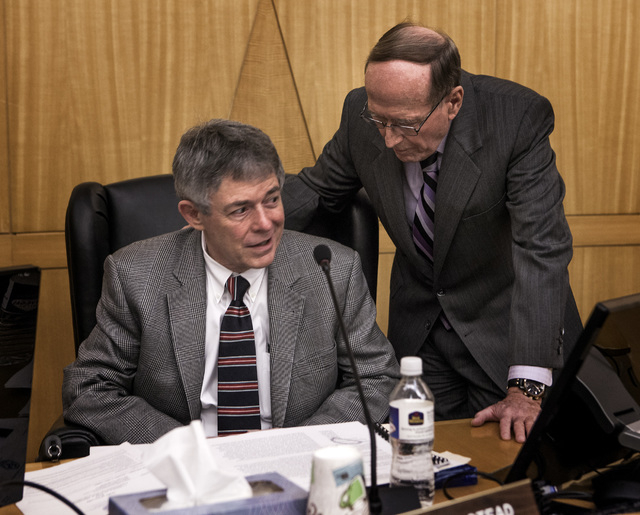 LAS VEGAS — A Nevada commission approved a report Monday alerting state lawmakers that the Yucca Mountain nuclear waste project is not dead yet and they should press on with their opposition.

Otherwise the ridge 40 miles north of Pahrump could be put back on track by the GOP-controlled Congress.

The federal government has spent more than $14 billion studying the volcanic-ash mountain as a disposal site for 77,000 tons of highly radioactive spent fuel despite longstanding contentions by state experts that the site and repository design are flawed.

“The facts about Yucca Mountain and the U.S. Department of Energy repository plan have not changed,” said Robert Halstead, executive director of the Nevada Agency for Nuclear Projects. “The geology and hydrology at Yucca Mountain make it unsuitable site for the permanent disposal of high-level nuclear waste.

“DOE’s repository design does not fix the problems that would prevent the site from permanently isolating these long-lived wastes from the environment,” Halstead said.

He added that the Energy Department’s plan for hauling waste to the mountain “is unsafe and would cause unacceptable impacts in the Las Vegas Valley.”

Before a sparse audience at the Clark County Government Center, the Nevada Commission on Nuclear Projects unanimously approved the 44-page report to Gov. Brian Sandoval and the Legislature. Commissioner Aurelia Roberts was absent.

In the report’s preface, state Nuclear Projects Commission Chairman Richard Bryan described a cozy relationship between the Nuclear Regulatory Commission and Energy Department that he blames on singling out Yucca Mountain as the only site to be considered.

“Nevada certainly cannot rely on the NRC or the NRC’s staff to impartially and objectively evaluate DOE’s license application and its wildly optimistic conclusions regarding the site’s suitability and safety,” Bryan wrote.

In public comments at Monday’s meeting, Darrell Lacy, director of Nye County’s Nuclear Waste Repository Office, said, “There is a another viewpoint here, and Nye County has sometimes been attacked on this. However, we have tried to be open-minded.”

Lacy vouched for the integrity of the NRC staff, saying its members have some of the “brightest minds in this country. They are very well-respected, independent and unbiased.”

Bryan said later that the two federal agencies “are joined at the hip” and that many of their closed-door meetings were aimed at developing strategies to find Yucca Mountain suitable regardless of the state’s contentions.

“There is a litany … that is an indictment of the NRC’s failure to be objective and fair-minded. Reasonable people can disagree and I certainly respect your right to disagree,” he told Lacy. “But once you look at this review, I think many, if not most, would agree the NRC has not been objective, fair and even-handed with the state of Nevada.”

With Sen. Harry Reid, D-Nev., calling the shots until he lost his Senate majority post after the midterm election, the Obama administration has managed to stymie the Yucca Mountain Project by starving it of funds and enlisting a blue-ribbon panel to find a new path forward for nuclear waste disposal.

Four years ago, the Department of Energy told the Nuclear Regulatory Commission it wanted to withdraw its license application for the Yucca Mountain Project, but the commission’s licensing board wouldn’t allow it.

Then last year, a federal court compelled the commission to use $14 million in remaining funds to proceed with licensing by completing work on a safety review of the proposed repository, analyzing impacts on groundwater from entombing the waste in a maze of tunnels and establishing an electronic library of licensing documents.

One of five safety reports has found the mountain could be safe to store nuclear waste. That report was issued in October. The remaining safety reports are expected in January, Halstead said. Between $1 million and $4 million remain for the commission to complete its court-ordered tasks.