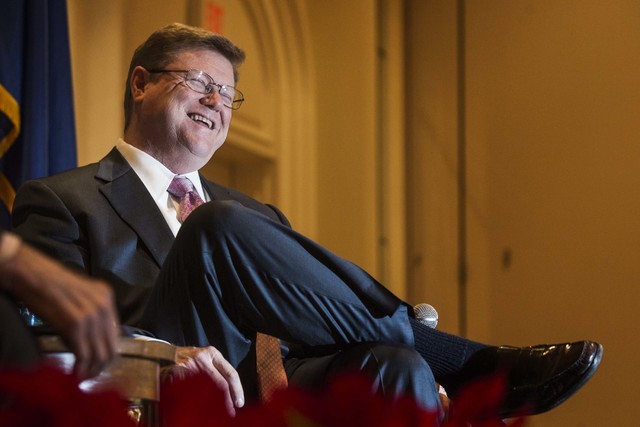 The congressman who served as head of Nevada’s Trump-for-president campaign said that Trump should not have the power to pardon himself.

The Washington Post also reported Trump has asked his advisers about his power to pardon aides, family members and even himself in light of the federal investigation of possible collusion with Russia.

“Would a governor commute his own sentence?” Amodei said in the recent interview on Nevada Newsmakers. “I mean, the self-dealing. I mean we’ve got rules about nepotism, I mean, this is nepotism on steroids. It is total self-interest.”

Comparisons to the past

Amodei, who was a JAG officer in the Army, then a civilian lawyer before going to Congress, said there is no precedent for a sitting president to pardon himself.

“I guess the only chances we’ve had in modern times to find out about that is with Nixon and President Clinton,” Amodei said. “My guess is no (a president can’t pardon himself), since didn’t it take (President) Gerard Ford to pardon (President) Nixon?

“It probably cost Gerald Ford his race with Jimmy Carter. So I am going to answer off the top of my head, no,” Amodei said, referring to the 1976 presidential election.

Trump said that he has “complete power” of pardons in a Twitter tweetstorm last weekend.

“While all agree the U. S. President has the complete power to pardon, why think of that when the only crime so far is LEAKS against us. FAKE NEWS.”

Amodei said he is uncomfortable when self-interest is shown by a public servant.

“I think the whole public-service thing focused on, hey — self-interest — is something you are not supposed to get anywhere near,” Amodei said.

“…So I think the ultimate ethical violation would be if you committed a crime that would be an offense which you would need a pardon for,” he said. “Then, you sure as heck, you can’t pardon yourself if you’ve been convicted,” Amodei said. “Talk to Gerald Ford.”

Amodei also does not like the public pelting of Attorney General Jeff Sessions by Trump.

Trump, reportedly still seething about Sessions’ recusal in the Russia/Trump investigation, has reportedly asked aides about replacing him and has publicly belittled Session in tweets, calling him “beleaguered” and “very weak.”

“What little I’ve seen, Jeff Sessions seems to be an honorable guy and I’m not sure how all this stuff got started,” Amodei said. “But I can tell you this: My evaluations where I sit is if anybody thinks that publicly having a personnel session with the attorney general is helping the administration, I disagree.”

The timing of the attacks are puzzling, Amodei said.

“Ok, he recused himself but that has been a while, in the past,” Amodei said of Sessions. “But it seems in the last week that the murmur mill has gone to the rumor mill and that has gone to, ‘Hey it is out in the open’ and ‘Have you’ve seen the tweet traffic?’ and whatever the heck. I’m just saying, if someone thinks this is raising the stock of the administration, I’ve missed that stock report.”

Reid reportedly is playing a big hand in the candidacy of Rep. Jacky Rosen for U.S. Senate in 2018. His “Reid Machine” has delivered Nevada to the Democratic presidential candidate for the past three elections.

“Sen. Reid’s influence in his home state (congressional) delegation is something that has never been in doubt,” Amodei said. “It is kind of a reality. I don’t think it is extinguished by his resignation.”

“He’s got to do something during the day and I figure he’s probably not working on his stamp collection or that sort of thing,” Amodei said. “I think it is kind of ‘business-as-usual’ as far as what the Democrat Party is doing in Nevada.

“Sen. Reid is kind of the conductor of the orchestra,” Amodei said.