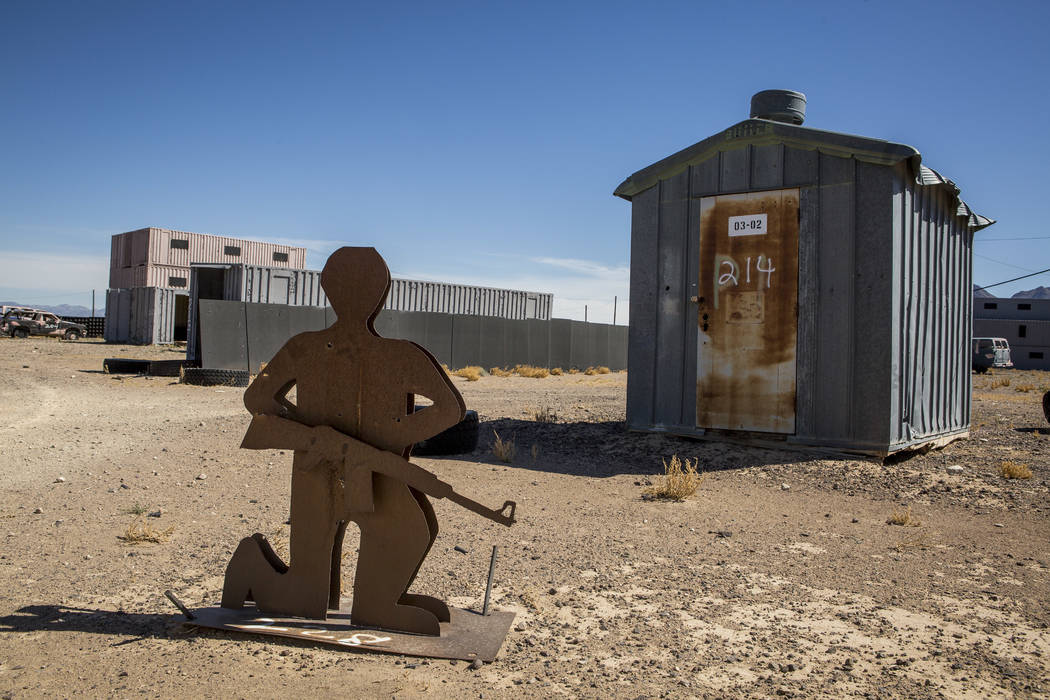 Patrick Connolly/Las Vegas Review-Journal A metal target waits for action in "Gotham City," an urban warfare facility at the Nevada Test and Training Range, on Sunday, May 21, 2017. 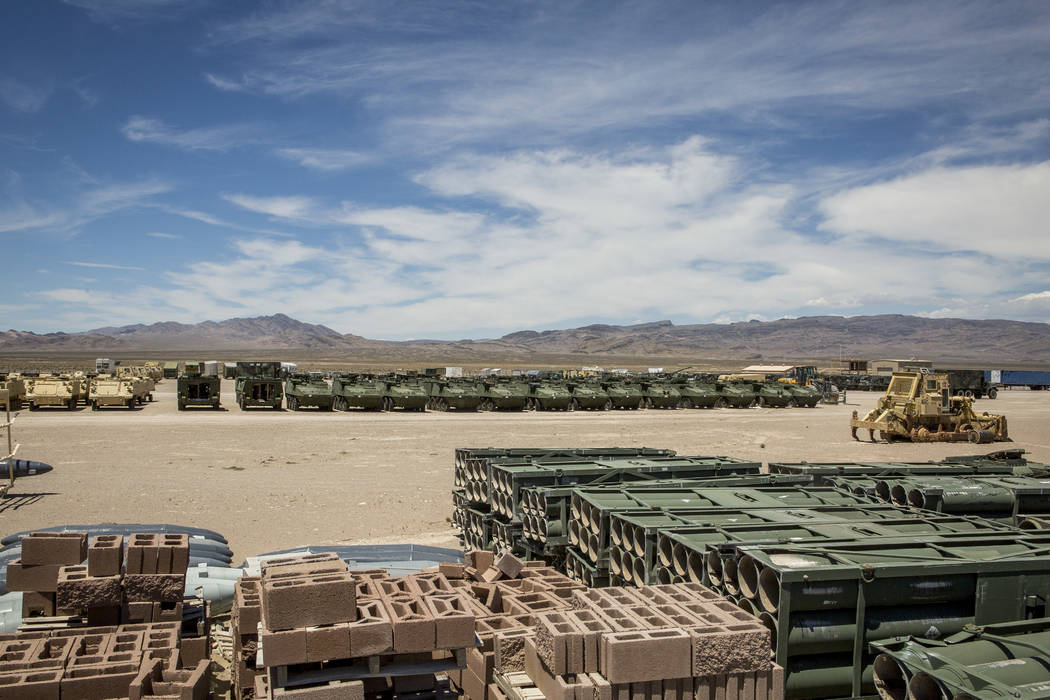 At a storage lot jokingly referred to as "K-Mart," tanks and other vehicles wait tb prepped and deployed as targets on the Nevada Test and Training Range on Sunday, May 21, 2017. Patrick Connolly Las Vegas Review-Journal @PConnPie 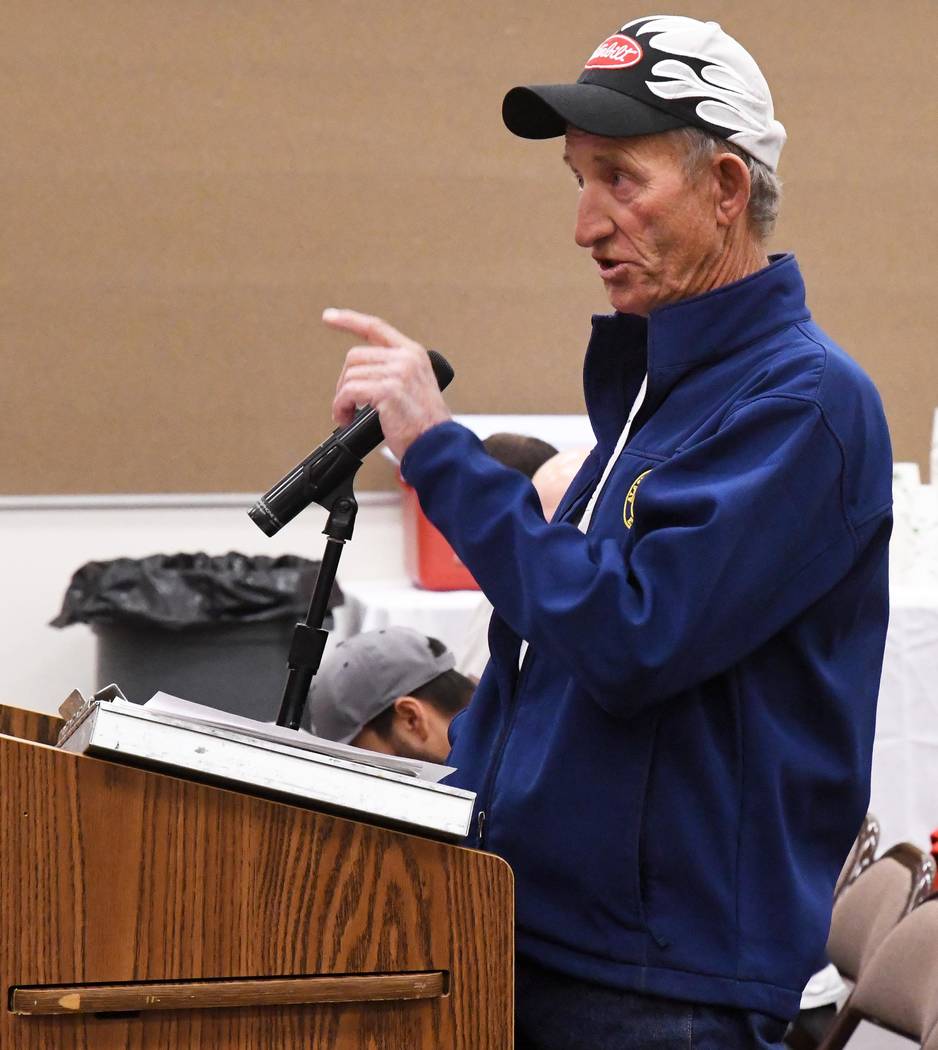 Richard Stephens/Special to the Parhump valley Times Beatty resident and STORM-OV co-founder Brad Hunt makes a point during the comment portion of the Air Force hearing on their proposals for the future of the Nevada Test and Training Range.

A good number of area residents turned out in Beatty for an Air Force public hearing regarding proposals for the renewal and potential enlargement of the Nevada Test and Training Range (NTTR).

The Air Force’s Jan. 24 presentation in Beatty was basically identical to a previous presentation, and so was the reaction of local residents. The overwhelming sentiment of locals was in favor of keeping the status quo, identified as Proposed Alternative 1.

There was some satisfaction that the Air Force had modified Proposed Alternative 3A, which called for the annexation of 18,000 acres of land close to Beatty. Alternative 3A1 would reduce the annexed land by 2,592 acres to accommodate existing mountain bike trails, a VFW poker run route, and a Best of the Desert off-road race route.

Alternative 3A1, however, would still block a proposed mountain bike trail, reduce grazing land, and take away some areas used for outdoor recreation.

At the hearing locals objected to the additional withdrawal on several grounds: loss of recreation and of economic development tied to recreation, the possible effects on protected species, such as the Amargosa toad, the possible contamination of the Amargosa River from activities at its underground headwaters, and even the possibility of wildfires caused by military activities along the proposed 368 Energy Corridor.

Patty Butler was concerned that bombing activities could potentially collapse the underground headwaters of the Amargosa River, which flows all the way to the south end of Death Valley and supports a number of species, including the Devils Hole pupfish.

Several residents met the day after the hearing to provide viewpoints to help with the crafting of a letter from the Beatty Town Advisory Board stating the town’s position on the proposed alternatives.

Again, the sentiment was strongly in favor of Alternative 1 and against the taking of the land near Beatty.

Beatty, through the efforts of the STORM-OV and the Beatty VFW, has been working hard to develop outdoor recreation as a base for the town’s economy, and the feeling was that any loss of available land harms this endeavor.

The Air Force’s justification for enlarging the NTTR is that evolving designs and capabilities of aircraft and defense systems has created the need for more space to replicate combat conditions. Some locals suggested that they need to get creative and find a way to do that without taking more land than the 2.9 million acres of Nevada land they already have.