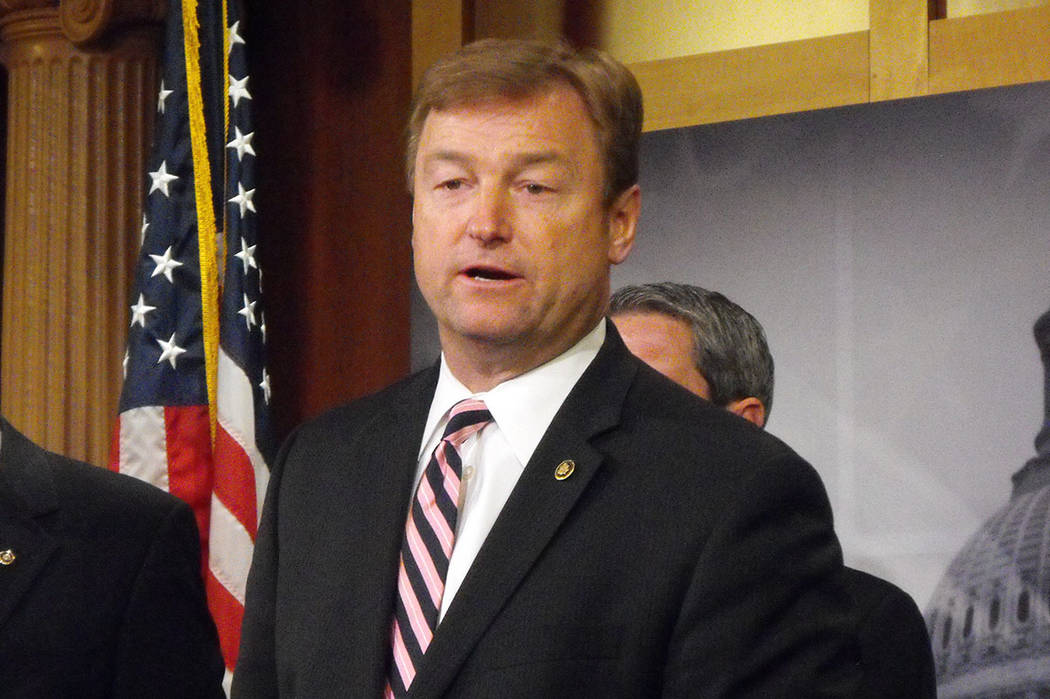 Special to the Pahrump Valley Times Sen. Dean Heller, R-Nev, speaks on the potential firing of special counsel Robert Mueller by President Donald Trump, the inquiry of Facebook CEO Mark Zuckerberg and the impending retirement of House Speaker Paul Ryan in 2018 with rural newspapers in Nevada. Heller chats with rural newspapers on a monthly basis on updates of what's new in Washington D.C.

President Donald Trump might have mulled over firing special counsel Robert Mueller, who is overseeing the Russia investigation, in the last several days, or months, but not everyone in his party is in support of that action.

U.S. Sen. Dean Heller, R-Nevada, said the White House should refrain from firing Mueller, though he hoped the investigation that has gone on for nearly a year under the special counsel will soon wrap up, during a conference call with reporters from several newspaper outlets across rural Nevada.

“I don’t know that there’s a first-hand response outside of the fact that I hope he (Trump) doesn’t do it,” Heller responded Wednesday about Mueller’s potential firing.

Heller speaks to reporters from rural newspapers each month exclusively on a conference call on a variety of pressing matters in which the Pahrump Valley Times participates.

The senator said he wants Mueller’s team “to be thorough, but I also want them to get this over with.”

The senator said he believed it would be in the best interest of the country and the process in Washington D.C. if the investigation was to wrap up.

Heller also spoke on other pressing matters including the recently announced retirement of Speaker of the U.S. House of Representatives Paul Ryan and the testimony of Facebook Inc. CEO Mark Zuckerberg.

Mueller was appointed as special counsel about 11 months ago in May 2017 to investigate the potential of Russian interference in the 2016 election and potential ties between Trump’s campaign associates and Russian officials.

Mueller was appointed by Deputy Attorney General Rod J. Rosenstein. U.S. Attorney General Jeff Sessions recused himself in March 2017 from any investigation following his acknowledgment he had failed to disclose meetings he had with Sergey I. Kislyak, the Russian Ambassador to Washington, during his time as an adviser to Trump’s campaign.

Things have been heating up on the topic of Mueller’s future, as Trump’s press secretary Sarah Sanders announced the president believed he has the power to fire special counsel Mueller on April 10.

Sanders, however, didn’t suggest that Trump was going to take that action.

That announcement followed an FBI raid on April 9 of the New York City office and hotel room of Trump’s attorney, Michael Cohen. Federal agents acted partly on a referral from Mueller to federal prosecutors in New York, though the raid was not related to the Russian investigation.

Following the raid, Trump called the action a “disgraceful situation” and “a total witch hunt.”

On the legal end of things, some experts exclaim that Trump can’t fire Mueller, at least not directly.

Jill Wine-Banks, who worked on the Watergate investigation of President Richard Nixon, told CNBC that only the attorney general, or someone else with the authority of that position, can fire Mueller. Since Sessions recused himself, Rosenstein is acting as AG for the purpose of the investigation, she said.

Wine-Banks said Trump could also fire Rosenstein, barring his resignation, which may be to the president’s benefit.

“Eventually, you could get somebody who would do anything the president would ask,” Wine-Banks told CNBC. “It would be wrong. There would be mass protests in the streets.”

In response to Trump’s statements on his right to fire Mueller, bipartisan legislation was introduced on Wednesday that would make it more difficult for the president to accomplish that task.

The legislation’s passage would mean Mueller could only be fired for “good cause” and only by a senior official at the Justice Department.

Mueller, and future special counsels, would also be able to seek an expedited judicial review of whether they were fired for a good cause, within a 10-day window, following termination, under the proposed bill dubbed the Special Counsel Independence and Integrity Act. If termination was found not be for good cause, a special counsel would stay in place.

On the conference call, Heller said that he agreed with most Republicans in Washington D.C. that Trump would not choose to fire Mueller.

Heller was also part of the questioning of Facebook’s Zuckerberg by Congress that went on for two days in April.

Zuckerberg faced many questions by members of the House Energy and Commerce Committee and from the Senate Judiciary and Commerce committees earlier this month. Election meddling to how Facebook handles user privacy were among the topics.

The questioning follows the data of 87 million people being harvested through a quiz app on Facebook by Cambridge Analytica, a political consultancy.

Heller explained that Zuckerberg exclaimed he thought the millions of users who were breached were victims.

“Usually when you answer a question like that, there’s some level of restitution,” Heller said. “I haven’t heard if the apology was all they considered to be restitution or if they anticipate that they will be doing more.”

According to a report in the Las Vegas Review-Journal, Heller also revealed his daughter was among the millions of victims during the inquiry. Several members of his staff were also notified by Facebook that their data had been stolen, the report stated.

Heller said the Senate will probably look at legislation to see if privacy concerns could be matched with new laws, though he wasn’t in favor of regulating the internet or taxing the internet, he said. Heller added that there’s a movement in Washington D.C. to probably do both.

“It would have to be a pretty compelling piece of legislation to get my support, but if we can help and monitor some of these transparency issues and make sure that there is consumer protection out there, I’ll take a close look at it.”

Heller added, “Heavy regulation on the internet, I consider it one of the last bastions of freedom we have, and I hate to think that Congress inadvertently would overregulate it, and we would lose the kind of access we’re having.”

House Speaker Ryan announced that he won’t seek re-election in 2018.

Heller said there’s implications to this announcement on who will control the House next year.

“I do believe that it puts more emphasis on the United State Senate moving forward because I don’t think it bodes well for the House that the speaker has decided to step down,” Heller said.

In a report on CNN, the Wisconsin Republican was quoted saying, “I like to think I’ve done my part, my little part in history to set us on a better course.”

Many reports also point to Majority Whip Steve Scalise as a frontrunner to succeed Ryan.