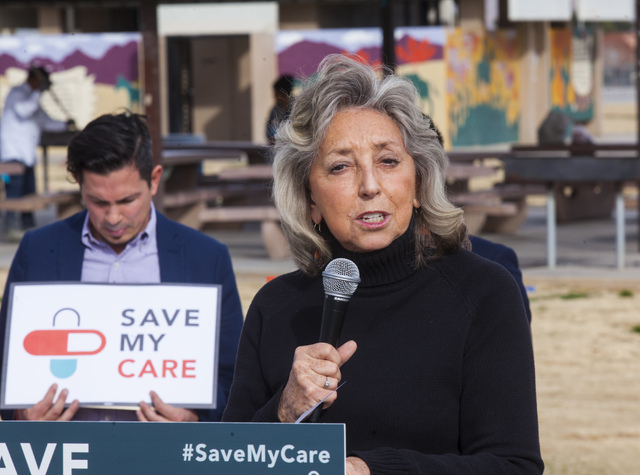 Miranda Alam/Las Vegas Review-Journal U.S. Rep. Dina Titus, D-Nev., speaks at an event opposing the repeal of the Affordable Care Act at Freedom Park near downtown Las Vegas on Thursday, Feb. 9, 2017. Titus is considering a run for the U.S. Senate in 2018.

Nevada’s 1st U.S. House District Rep. Dina Titus, D-Las Vegas, said she has not ruled out a run for the U.S. Senate, even though former U.S. Senate Majority Leader Harry Reid has put his backing behind another Democratic candidate.

Reid, who retired at the end of 2016, is reportedly backing Nevada’s 3rd U.S. House District Rep. Jacky Rosen as the Democratic U.S. Senate nominee. Rosen has already said she will run for the Senate seat now held by U.S. Sen. Dean Heller, R-Nevada.

Titus said on Nevada Newsmakers last week that she will not base her decision on what Reid or Rosen do, setting up the potential for a rugged Titus vs. Rosen Democratic primary in 2018.

“I can’t control what Sen. Reid does nor what Jacky Rosen does nor what Dean Heller does,” Titus said. “I can only control what Dina Titus does. So I will make my decision based on that — not on Sen. Reid’s preferences, whatever they may be, and for whatever reason they are.”

Titus’ comments last week brought back memories of previous behind-the-scenes clashes between Titus and Reid. Reid and other top Democrats lined up behind former Henderson Mayor Jim Gibson in the 2006 gubernatorial race, only to see Titus defeat Gibson in the Democratic primary.

In 2012, Reid tried to help then-state Sen. Ruben Kihuen of North Las Vegas capture the Democratic nomination for Nevada’s 1st U.S. House seat. Reid’s backing did not deter Titus, who won the seat that year and still holds it now. Kihuen, who returned to the state Senate, won the U.S. House District 4 race in 2016.

“That was an interesting battle,” Titus recalled about her 2006 primary against Gibson. “They said the weekend before the election that it was too close to call and I ended up beating him by 20 points statewide, so I’m not afraid of a primary.”

She later added about Gibson: “That was another one of Harry Reid’s picks, don’t forget.”

Titus also mentioned Reid when she was asked if she thought Clark County Commissioner Chris Giunchigliani should run for governor as a Democrat in 2018.

“I won’t tell her (Giunchigliani) what to do anymore than I want Harry Reid telling me what to do.”

Rosen is a newcomer to politics, winning the 3rd District seat in 2016 in her first try at running for office. Titus spent 20 years in the Legislature (including as Senate Minority Leader) before winning her first U.S. House campaign in 2009.

“Jacky Rosen is a nice lady,” Titus said. “She is new to politics. Maybe that has some appeal. People might want somebody who has not been part of the process. But I am proud of my record and I think Nevada has got some really tough fights and needs somebody who is seasoned in the ring.”

Titus said her staff is currently doing a “deep dive” into polling data about a possible U.S. Senate campaign but gave no clear time table of when she might make her decision.

She spoke of a potential Senate campaign in serious tones.

“It is not child’s play when you are running for a (U.S.) Senate seat, especially when it is a seat that they (Republicans) have to hold,” Titus said. “So I know it will be war and I know it will be brutal. So you have to take all that into consideration.

“But I’ve had tough fights before,” Titus added. “That is not the thing that really scares me.”

Titus also said she realizes the gamble of running for the U.S. Senate. She would be giving up a safe seat in the U.S. House (with good committee assignments) to enter a race that has the potential for a razor-thin margin of victory, if the 2018 Senate race is like U.S. Senate races in Nevada in previous years.

“This is a personal choice as well as a political choice, in terms of how does my lifestyle change?” Titus said. “Is it worth putting yourself through the year and a half (of campaigning)?

“But more importantly, how does my move affect the people of District 1 and all Nevadans?” Titus said. “Can I

be of great service staying in the (U.S.) House on these committees and building up some more seniority or am I better served in the Senate, being the freshman at the end of the line. So those are the kind of things I’ve got to give good thought to.”

Heller as an opponent

Heller has been called the most vulnerable Republican U.S. senator up for re-election in 2018 in some media reports. But Titus is wary of tagging him as an easy mark.

“According to national numbers, that (vulnerability) is true,” Titus said. “He is the only Republican (in the Senate) running this time that is from a state that Hillary Clinton carried (in the 2016 presidential election). And the health-care issue has kind of gotten him boxed in. He doesn’t want to throw people off Medicaid — that was the governor’s big issue — but he doesn’t want to make his (Republican) base mad. So I think he is vulnerable in that sense.

“But here on the ground in Nevada, he’s won many statewide races,” Titus added. “He is very personable. He’s moderate, really, in his overall record. So I’m not lulled into thinking he’s really vulnerable and it would be an easy race to beat him. There is no question that it would be tough and that he would be popular.”

Titus said the race would probably be very close.

“No question about it,” she said. “Nevada is typically a swing state and that is especially true in off-year elections. It is not just the Senate races that are close. You can win an Assembly seat by four or five votes. It has been done many times.”