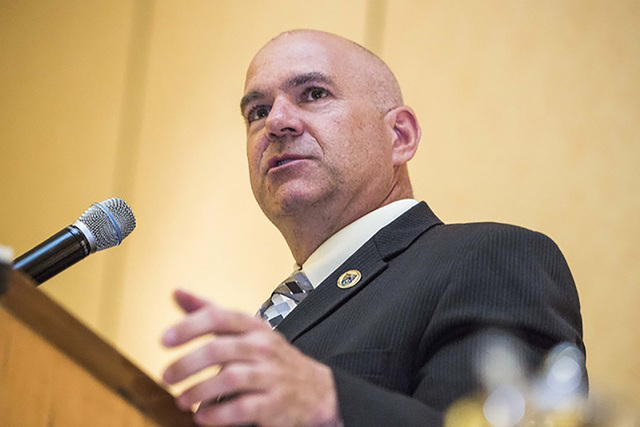 James Dzurenda, the Nevada Department of Corrections director, speaks during officer graduation at Texas Station in May. He said in a recent interview that the state is way behind the curve in inmate management. Jeff Scheid/Special to the Pahrump Valley Times

CARSON CITY  James Dzurenda is on a mission to sell change behind bars.

As director of Nevadas beleaguered Department of Corrections, Dzurenda has been traveling the state to meet with staff and legislators. He has scrutinized Nevada laws and the departments antiquated records system.

From his perspective, Nevada is way behind the curve in inmate management. Fixing the problem will require overcoming decades of a lock-em-up culture. And money.

Dzurenda, 50, held prison administration jobs in Connecticut and New York City before Gov. Brian Sandoval hired him in April to shake up the agency following a string of shootings, one fatal, at Nevada prisons.

Since arriving, Dzurenda made a U-turn on the agencys mission, shifting the emphasis to rehabilitating inmates instead of keeping them contained. Now he has to convince state lawmakers and the public that changes will benefit public safety and save money in the long run.

Dzurendas plans are evolving, and details on funding requests will become clearer when the governor releases his proposed two-year budget in January.

When I first came on, the mission of our agency was a one-liner that said something like, The Department of Corrections shall supervise, monitor and secure offenders that are assigned to us from the courts, Dzurenda said recently. We do a lot more than just supervise offenders. If we dont, were not being good public servants.

Nevada houses 13,500 inmates at 18 facilities. About 88 percent of the inmates are serving sentences of less than 20 years, he said. That means about 12,000 are slated to be discharged within the next few years.

Dzurenda maintains the state has to do everything possible to break the cycle of crime while it has inmates undivided attention, to prevent recidivism and victimization in their communities once they get out.

If I dont do something to try to change their behavior, whether its addiction, lack of education, anger management or anything like that, then Im doing a bad job for the community, he said.

Funding programs to rehabilitate inmates could be tricky. Dzurenda understands that if given a choice between giving more money to education or prisons, legislators and the public will favor schools.

But what Im trying to sell is if I get the funding … I can reduce our population, I could save millions of dollars to be able to fund a lot more in the schools because I can get our populations down.

If not, he said the number of Nevada inmates will continue to climb, along with costs.

The 2015 Legislature approved a two-year, $521.5 million budget for prisons, a 7 percent increase over the previous biennium.

Nevadas inmate population already exceeds projections on which the budget was based. The annual cost per inmate is around $20,733 for the fiscal year that began July 1.

I would love to see staff get some raises, Dzurenda said. I know its not a cure-all, but it will at least be a way we can start helping morale.

Low pay has been a consistent complaint by correctional officers. A starting annual salary is about $40,000.

He said hes also been meeting regularly with staff and administrators, sometimes on weekends, after hours and off the job, to encourage dialogue.

I tour all the time, especially High Desert, he said. Im in there once a week.

Gene Columbus, a correctional officer and president of the Nevada Corrections Association who has criticized prison administration, welcomed Dzurendas approach.

He has met with Dzurenda and is encouraged by the communication, something lacking in the past, he said.

Dzurenda in May eliminated the use of birdshot rounds in shotguns to quell fights at state prisons. Birdshot was used in Nevadas prison system since the early 1980s, but has been largely discontinued around the country, replaced by stun guns, pepper spray, beanbags and rubber pellets.

Last year, in a review of the agencys use of force, an outside consulting group recommended Nevada do away with the practice. Dzurenda made it policy.

Everything thats been taken away could save a life, said one correctional officer who asked not to be identified for fear of losing his job. Now you have these rubber rounds. Thats not going to stop anybody.

Things like that, staff needs to see the results, he said.

Birdshot, he said, is ineffective and risky.

Dzurenda said some state laws hamper inmates efforts to gain employment on the outside.

Things like a barber. Right now we do a great job of training inmates to be barbers. Everybody has to get haircuts, he said. They can become master barbers, however our state law wont allow them to get a license when theyre released from prison. Ever.

Which doesnt make sense to me, he said, because if you want them to be successful and not commit crimes down the road they have to get jobs.

He also wants to change state law to allow more use of volunteers. Around the country, he said, prison systems use volunteers to run programs such as religious services and counseling. Connecticut, he said, has about 13,000 volunteers in its prison system.

It gives offenders connections on their way out, he said. They trust them a little more.

But Nevada law requires state agencies to pay a years worth of workers compensation benefits upfront for each volunteer, he said.

So I have to limit the amount of volunteers based on how much I can budget, he said.

If I want to find out how many offenders came from Las Vegas, its very difficult, he said. Any system around the country, you should be able to just pull it up.

Here, we have to do it all manually.

In June, the Justice Department said Nevadas prison system violated the Americans with Disabilities Act by housing HIV-positive inmates separately from other inmates and denying them equal employment opportunities.

Dzurenda said it shocked him to learn how Nevada manages HIV-positive inmates because federal law prohibits agencies from doing what we were doing.

He also said identifying HIV-positive inmates gives officers a false sense of security because an inmate could contract a disease after a test came up negative.

A better course, he said, is to presume all offenders are positive.

Thats how we have to treat everybody, Dzurenda sad. So you take precautionary measures whatever you do.

Dzurenda doesnt deny the scope of challenges the department faces. And he knows changes will be incremental.

It feels like every cabinet Im opening theres a different hole, he said.

Yet he remains optimistic.

Its all good stuff, he said. I need everybodys help to try to sell it, get the right things out and see the improvements down the road.