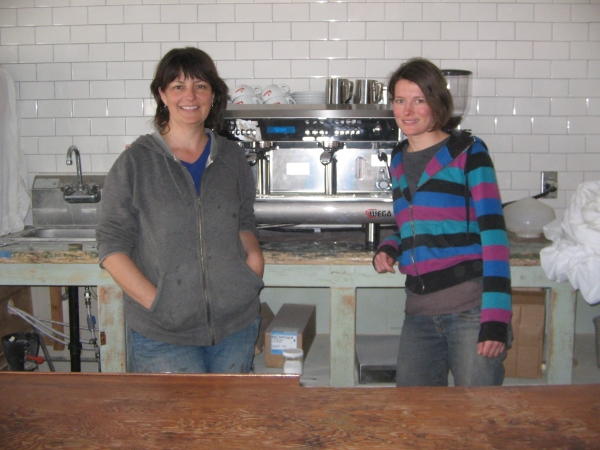 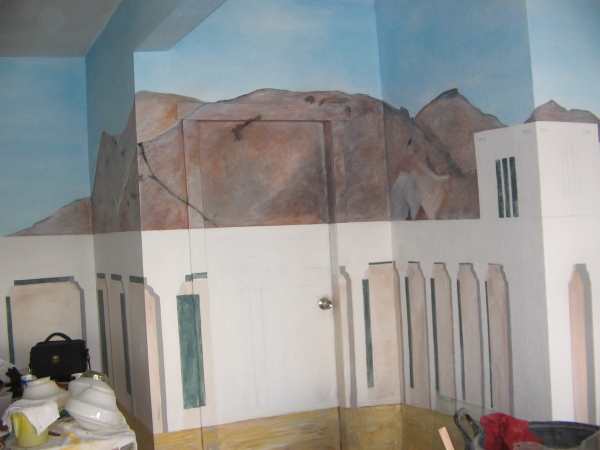 DEATH VALLEY JUNCTION, CALIFORNIA – Aromas of espresso coffee, homemade dinners and other culinary delights will soon be filling the formerly vacant Amargosa Cafe at Death Valley Junction. Manager Bobbi Fabian has been diligently working since last summer to restore the historic building and bring new life to the eatery with a planned opening the first weekend in March.

Fabian left Los Angeles last June and headed to the desert spot to refurbish the cafÃ©, which is part of the U-shaped structure that includes the historic Amargosa Opera House and Hotel, located along California State Route 127 en route to Death Valley.

The building dates back to 1925 when Death Valley Junction was a mining town built by the Pacific Coast Borax Company which would bring investors to the area who stayed at the private hotel which later became commercial. The first cafÃ©, the Lilia C, named for the daughter of a mining official, opened in 1932. It was later changed to the Amargosa CafÃ© and the name will stay, according to Fabian.

When Marta Becket, renowned ballet dancer, actress, painter and pianist, arrived in 1967, she refurbished and transformed the abandoned recreation hall into the present-day Amargosa Opera House, filling it with her artwork and performances.

Since 2003 Fabian and a friend would travel to the area every Christmas and she became enamored with the site. During her annual visit in 2014, Fabian met Jenna McClintock, who is performing ballet and reviving now retired Becket’s choreography at the opera house.

Fabian returned over Valentine’s Day weekend last year and helped prepare a dinner show and assist with McClintock’s performance. She learned that the cafÃ© was up for lease, but was not interested in that option.

She decided to undertake her mission of renovating and reopening it to benefit the nonprofit Amargosa Opera House, Inc.

“The cafÃ© is part of the Amargosa Opera House and Hotel, so it’s not a separate thing,” Fabian said. “And it’s for a good cause, it’s to continue Marta’s legacy.”

All the money from cafÃ© patrons will be going back to restoring the building, maintaining the opera house, including Marta’s murals in the hotel and to making a difference for the town of Death Valley Junction, added Fabian.

Brooke Van Natta also came from Los Angeles to help Fabian with her project. Prior to that, Van Natta had never been to Death Valley Junction and had “no immediate connection” to it. That has all changed since she has been conducting tours for visitors in the opera house.

“I mean, I get to see people’s faces when I take them in the opera house on tours and I get to see sometimes, their tears and hear how it inspires them in different ways,” Van Natta said. “And so to me, I feel like it’s very important that it continues and because it’s so different than every other place.”

She said many towns are becoming more “homogenized” or the same, with chain restaurants and this is something completely different and unique that people cannot experience anywhere else, comparing it to “a gem that needs to be held onto.”

“Having the cafÃ© be part of that mission to keep this going and keep it alive, even if it’s nothing beyond just existing, I think it’s, you know, so people can continue to experience it and continue to be inspired,” Van Natta said.

There have been some delays in restoring the cafe. As a nonprofit, they’ve depended on volunteer help.

“We have had some fantastic friends and people come and help us for free, basically,” Fabian said.

A friend from Portland, Oregon spent a few weeks doing carpentry work and she also had friends from her native Australia lend a hand. Another one constructed tables described as “communal” by Fabian for people to order their food at the counter and then be able to sit together and have discussions.

Fabian is quite handy and talented herself, due to her background as a photographer and painter and she previously did renovations.

She spruced up a 22-foot counter top inside the cafÃ© with scrap lumber found at the former rail yard across the road. After cutting and cleaning it, Fabian took broken glass, metal debris and other items also collected there which she inlaid in glass to top off the counter.

Fabian will also display historical photos and artifacts in one room of the cafÃ© courtesy of Brian Brown, owner of the China Ranch Date Farm in Tecopa, whose family is originally from Death Valley Junction.

Van Natta, one of four employees, will be working the front counter as the barista. As an added perk, she’ll operate the Genovese expresso coffee machine donated by a distributor friend of Fabian from her native Australia.

The cafÃ© will also offer teas, sodas and other non-alcoholic beverages.

In addition to managing the cafÃ©, Fabian will also be the head cook and baker, preparing freshly-made burgers, sandwiches, breakfast items and other dishes with as many organic ingredients as possible.

There are future plans to plant an organic garden and install chicken coops for fresh eggs on the property along with composting.

The cafÃ© will be open five days a week, Thursday through Monday from 7:00 a.m. until 3:30 p.m. for breakfast and lunch.

During the show season at the opera house, Fabian will be cooking a set dinner menu prior to Jenna McClintock’s 7:00 p.m. Friday and Saturday performances and lunch before the 2:00 p.m. Sunday matinee. Reservations are required and can be made by calling the cafe at 760-852-4432.

Fabian said they are still in need of donated kitchen equipment, such as a convection oven and gas burners, among other items. Contact her at the cafe if you can help.

For more information on the cafÃ© click on its website, which will be online in the near future at www.amargosacafe.org.

Fabian said she has done a lot of things in her life and it’s important that she is doing this.