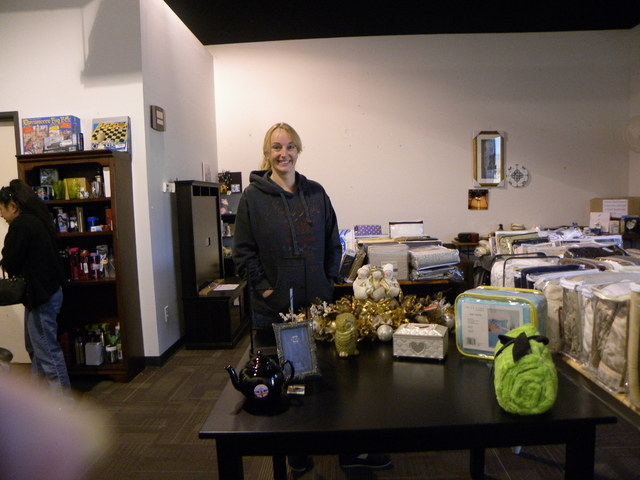 Small businesses open and close quite frequently in Pahrump, but if all goes as planned, Out of the Box Liquidations will be here to serve you for a long time.

The relatively new box store is located on State Street, off of Humahuaca Road, and carries a little bit of everything.

Owner Jeannine Schulte said she wanted to do something different. She’s been a Realtor for Re/Max, before the housing slump caused that office to close. “I went into behavioral health and stayed with that for about five years here.

“I decided to change careers again when my husband’s business setting mobile homes also went downhill. He became very inventive at holding yard sales with items he purchased from liquidation companies in an attempt to keep his employees working.

“After watching him succeed for two years, I decided to open Out of the Box Liquidations. It takes the items inside so customers aren’t exposed to the weather and still get great deals.”

Schulte said her items come from an online source that carries different categories. “I have an enormous selection of drapes, duvet covers and bedding,” she said. “The categories are numerous.”

The liquidation online auctions cover everything from housewares to lawn and garden items, including tools. “Those don’t last very long,” Schulte said.

She said the boxes are sold to her as is and she never knows what is going to be in the boxes. “It’s like Christmas every day,” she said.

Schulte said some of the items she gets go on eBay immediately. “If it’s a valuable collectible or something like snowshoes, skis or scuba gear, it isn’t going to sell here.”

She also has a “free box.” Everything in it needs some minor repair which Schulte isn’t going to do. “My prices are really low. For instance, I carry furniture you could buy at Walmart, only you would pay twice as much and still have to assemble it.” Her samples of furnishings are assembled for selection purposes but most are do-it-yourself projects.

She is serious about her pricing being 50 percent less than retail and she knows the value of the items in her 2,500-square-foot space.

Schulte said she won’t handle consignments, but if an artisan wants to bring a product to her, she may choose to purchase it outright. “I have some gorgeous centerpieces and wreaths for the holidays that I bought from a local woman who makes them,” Schulte said.

Toys are on the way and Schulte said she keeps rearranging the sales floor to showcase the seasonal items. There are sofas, tables and dining room sets, shelving and area rugs. The store has camping supplies, home decor and arts and crafts projects.

She carries small kitchen appliances, including some high-end convection ovens, coffee pots, dishes and toasters. She said, “It’s worth coming back because I never know what’s coming in.”

Schulte also networks with two other stores if customers can’t find what they want. “If I don’t have it, the odds are good that someone else does.”

Schulte said Out of the Box Liquidations gives refunds unless the item is sold “as is.”

She also offers a bulletin board for other small businesses or home-based businesses to advertise. “If someone has a truck for sale and makes a flyer, they can post it here.”