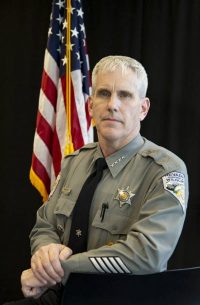 Nevada Department of Wildlife A graduate of the University of Nevada with a degree in biology, Mike Maynard started his career at NDOW in Southern Nevada where he was stationed for 12 years.

The Nevada Department of Wildlife has announced Mike Maynard as the department’s new chief game warden, making him only the sixth chief game Warden in NDOW’s history.

“I work with some amazing men and women in our Law Enforcement Division, and I am both humbled and honored to be chosen as the new chief,” said Maynard, who moves to the new position after serving as a captain at NDOW headquarters in Reno for the past three years.

Details were announced in a Jan. 8 news release.

A graduate of the University of Nevada with a degree in biology, Maynard started his career at NDOW in Southern Nevada where he was stationed for 12 years.

His patrol area started in Searchlight and then moved to Boulder City. Maynard also spent a great deal of time on the water patrolling Lake Mohave out of Cottonwood Cove in the Lake Mead National Recreation Area.

In 2010 he was promoted to the Lieutenant Game Warden for the Southern Region, a position he held for six years before moving to NDOW headquarters in Reno as the captain overseeing policies, regulations, legislation, and training.

“We conducted an exhaustive internal and external search to fill this position,” said Tony Wasley, director for the Nevada Department of Wildlife. “We are confident we have selected the right person for the job. Mike’s experience and passion will enhance and grow both the Law Enforcement Division and the Department as a whole.”

Maynard is replacing former Chief Game Warden Tyler Turnipseed, who retired earlier this year after serving as chief game warden for five years and as a game warden for NDOW for more than 20 years.

“I became a game warden because I’m passionate about Nevada and Nevada’s wildlife,” said Maynard. “I hope to use that same passion moving forward.”