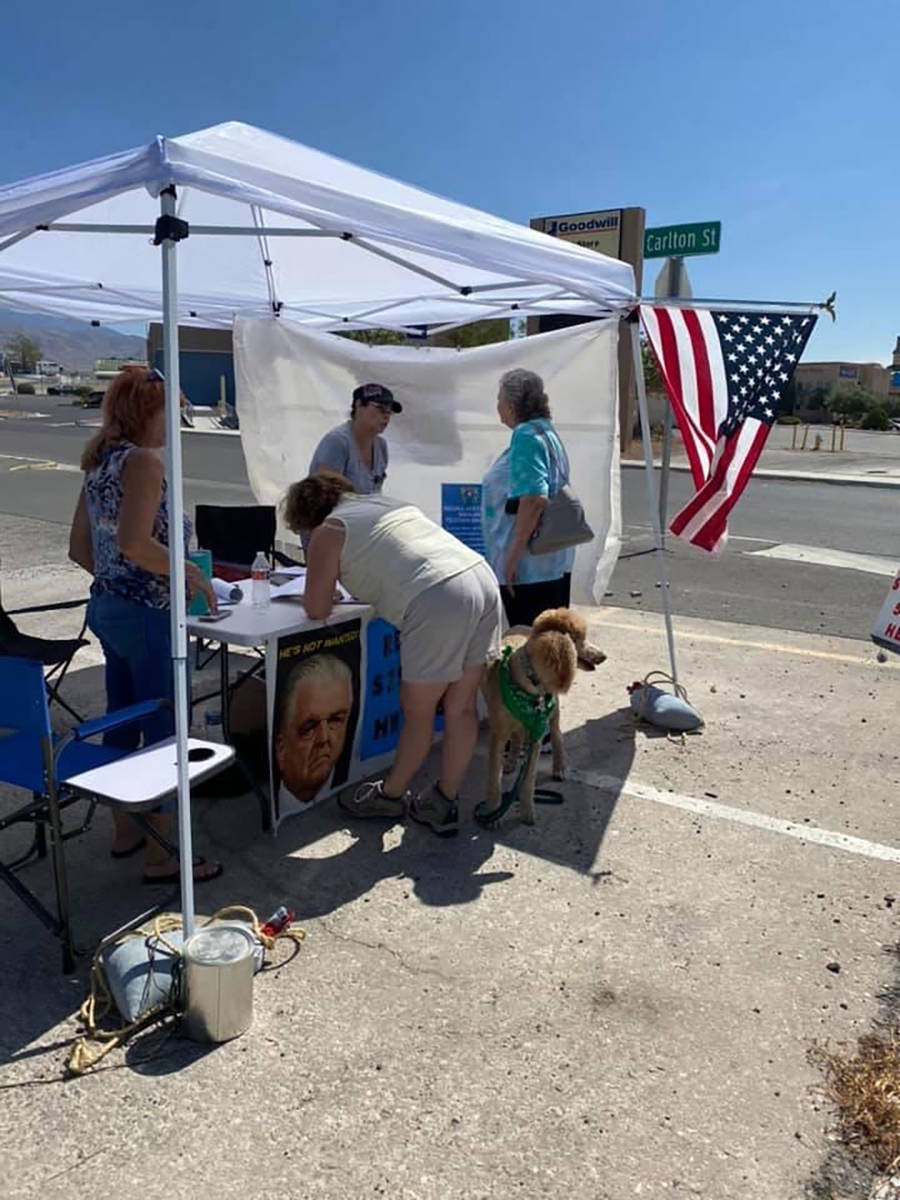 Special to the Pahrump Valley Times Battle Born Patriots has launched a new recall effort and is now collecting petition signatures to support its goal of removing Gov. Steve Sisolak from office. 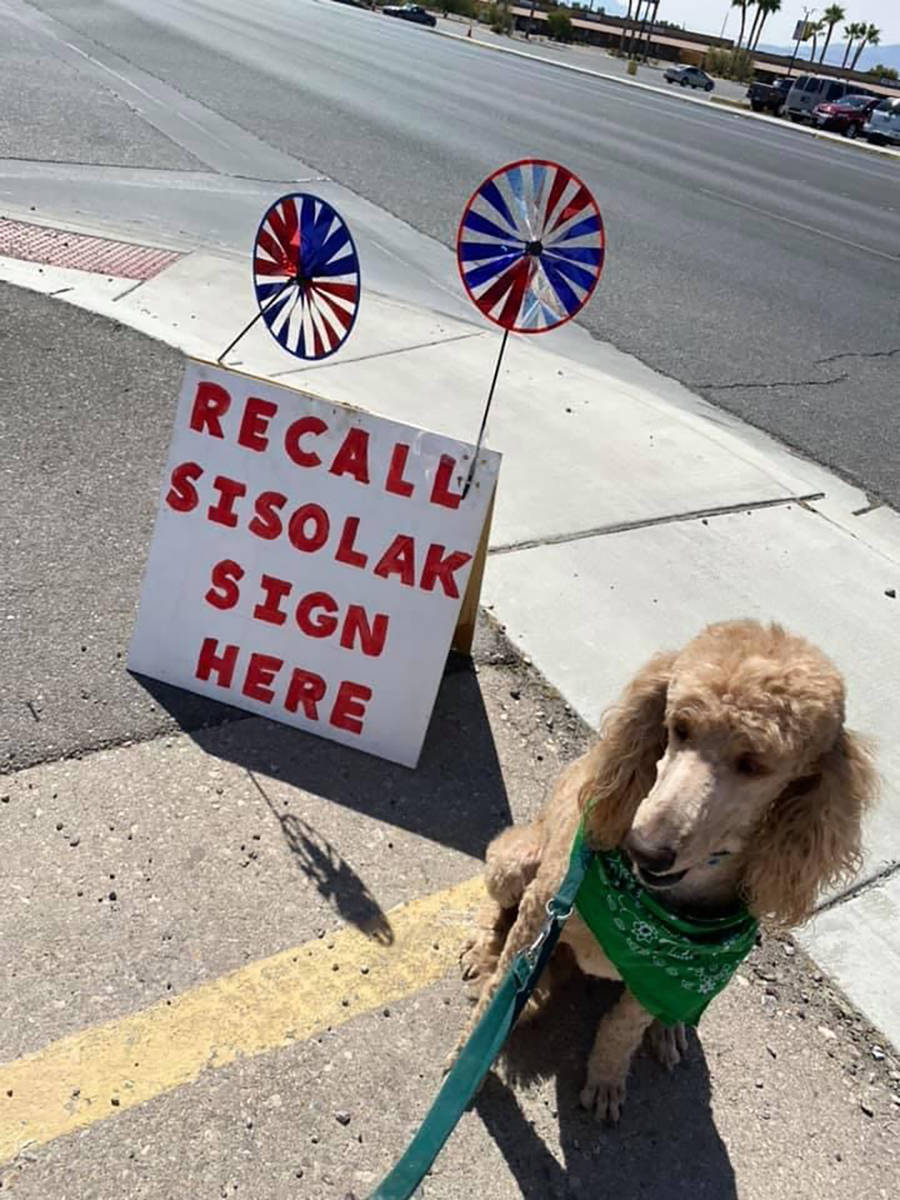 Special to the Pahrump Valley Times "Recall Sisolak - Sign Here" signs help direct voters to location at which they can add their names to the petition to recall the governor. 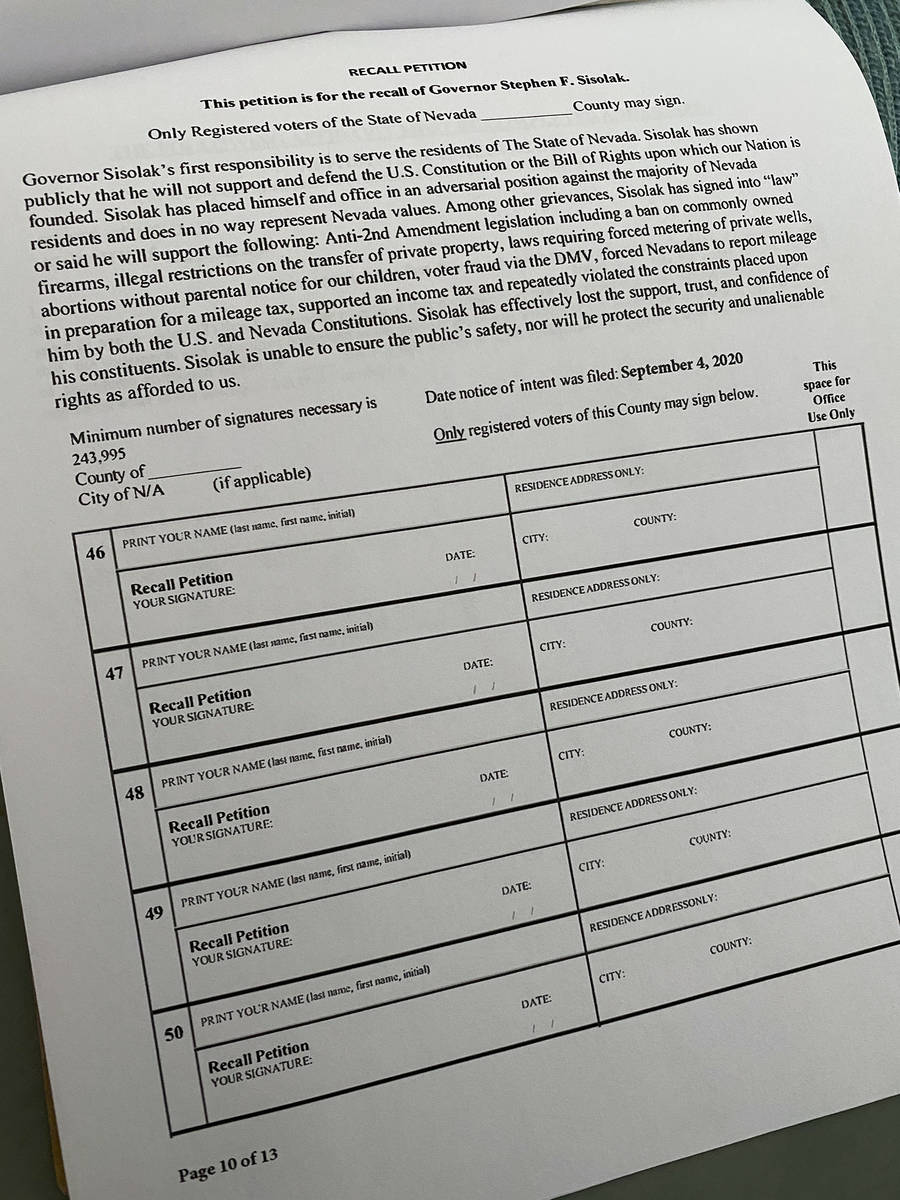 Special to the Pahrump Valley Times Battle Born Patriots Nye County Leader Dee Mounts provided this photo of the group's recall petition. In order to be successful, the group must collect nearly 244,000 signatures of voters who took part in the 2018 election.

Following Fight For Nevada’s failed attempt at a recall effort aimed at removing Gov. Steve Sisolak from office, a new political action committee has formed with the same intentions in mind.

Battle Born Patriots was established in late August and filed its notice of intent to recall with the Nevada secretary of state’s office on Sept. 3. The group has established teams in each county in the Silver State, including Nye County, and is doing all it can to gather as many valid petition signatures as possible within the 90-day time frame allotted for the recall petition process.

She explained that her original involvement with the recall movement started when Pahrump resident Savannah Zimmerman was the Nye County leader for Fight For Nevada. However, Mounts said her time with that organization was short-lived. With some disagreement as to ideology and strategy among those heading Fight For Nevada, not long after she’d gotten involved Mounts said the leaders within Fight For Nevada had conducted a vote and a majority decided they wanted to start a brand new organization; Battle Born Patriots.

Those forming the new recall group then approached Mounts and asked her to step up as Nye County lead for the new effort, something she was not entirely delighted to take on but in the end, it was a task from which she simply could not walk away.

“They didn’t have anybody who had the kind of background I have and if I didn’t take the lead, Nye County wouldn’t have a voice at all in this. I decided that was more important than how I felt, so I took the lead,” Mounts explained. “We filed our notice of intent on Sept. 3 and the next day we dropped petitions in every single county in Nevada. We have a website, I think it just went live and that’s TakingNevadaBack.com and we’re on Facebook at Taking Nevada Back and Twitter at Battle Born Patriots too.”

Mounts is encouraging those who participated in the 2018 election and who are aggrieved by the actions taken by Gov. Sisolak since he took office to seek out a signing location and add their names to the petition. Battle Born Patriots have quite a challenge ahead of them with approximately 244,000 signatures required for the recall effort to be a success, so every single valid signature counts. However, Nevadans do need to keep in mind that there are certain requirements pertaining to which voters’ signatures are considered valid in this process.

As detailed on Battle Born Patriots’ website, “You can sign the petition to recall Sisolak only if you voted in the 2018 midterm election. You also must be currently registered to vote in the same county you voted in in 2018. If you moved and changed your voter registration to a new county, you can sign a disenfranchised petition in order to have your voice heard.” It is important to note that online petition signatures are not valid.

Mounts also emphasized that Battle Born Patriots is a nonpartisan group and invites voters from all political parties to take part in its effort.

Thus far, Mounts has secured several locations at which voters will be able to sign the recall petition over the next few days. These include: