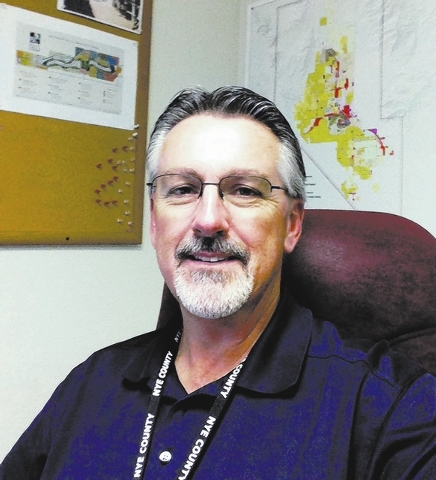 Newly-hired Nye County Planning Director Bobby Lewis sat in his office this week, with a Pahrump Regional Planning District zoning map on the wall behind him and a copy of the latest population estimates on his desk.

Lewis was hired at the Sept. 3 Board of County Commissioners meeting, following a recommendation by County Manager Pam Webster. Steve Osborne, who was promoted to planning director following the termination of Jack Lohman in April 2010, will return to his principal planner position.

Like Lohman, Nye County went outside to find an industry professional, replacing a county planner that had been promoted from within. Lohman had replaced Ron Williams, who was promoted to county manager.

Lewis will be the head of a county planning department that is attempting to streamline the process for developers interested in coming to Pahrump.

“I have experience on both sides of the counter, the private side and the public side,” Lewis said in an interview Tuesday. “I’ve owned my own business before. I want to be a person that’s helpful and a facilitator.”

His most recent job was development services director for the Merced County, Calif. Planning and Community Development Department until September 2010. But from October 2003 to August 2005, Lewis was vice-president of land acquisition and development for Plaster Development Company, aka Signature Homes, in Las Vegas. Before that, from February 2001 to October 2003, he was planning director for Orion Engineering and Surveying Inc. of Las Vegas. Lewis was a community planner for the city of Henderson for 14 years, from December 1980 to November 1994, then went to work as a planning supervisor for the city of Las Vegas from November 1994 to January 1983.

So what made him come to Pahrump?

“I saw the opportunity. You know I have both public and private sector experience. I just saw what Pahrump has to offer. They’re at kind of the cusp of growing again. I know with the economy it’s kind of stagnated everybody, but I think there’s a lot of things happening that are going to be good and I think Pahrump is poised to handle the next wave of growth when it comes about,” Lewis said.

“Of course we have challenges with the limited resources we have here and that is water. But with a plan and managed growth plan, we’ll see things happening in a good way for Pahrump as it grows into the type of community that we all want to live in.”

The issuing of water rights permits is handled by the state and there are already committed water right allocations that Lewis doesn’t see as a problem. “However we have a lot of undeveloped or vacant lots all over Pahrump that we’ll have to consider,” he said.

That’s part of the challenges he referred to.

“We’re growing into a transition I guess from more of a rural environment to more of an urban environment, especially here in Pahrump, not in Nye County. Nye County is essentially rural,” Lewis said. He added, “I like what we’ve done in certain subdivisions as far as design standards.”

It’s a big change from the Central Valley of California, where Lewis said it’s highly regulated and highly taxed. That provides a lot of advantages to being in Nevada, he said. While there’s been a concern recently over the possibility of all those vacant lots needing water some day, Lewis said the abundance of all this desert land is an advantage over Merced County.

“Their main base is agriculture, so that main base, as far as bringing monies in, really didn’t go away. Ninety-seven perent of the Central Valley and what we did in Merced County is agriculture. Every farm is a business so it’s just a different environment. So it’s built out in other words, it’s all built. So if you’re going to build houses, you’re actually encroaching on farmland and changing one use to another use. It’s not like vacant desert and houses popping up out of the desert,” Lewis said.

Lewis said in Merced County he received a couple of first-place awards for their community plans, including a state award for the Hilmar community plan in 2009, which was also recognized by the American Planning Association. He also built the first Geographic Information System (GIS).

Lewis said Pahrump has a lot to offer that Las Vegas doesn’t, like a quieter and safer community. He envisions Pahrump as an attractive place for people waiting to retire. Lewis said there are some nice areas to be developed, mentioning opportunities at Spring Mountain Motor Sports, the master plan at Artesia subdivision and Mountain Falls Golf Course as examples. Highway 160 will continue to develop and he feels there will be opportunities to create a downtown core.

When asked whether he’d recommend the county continue a moratorium on charging impact fees to help pay for development costs, Lewis said only time will tell if that actually attracts more business. “I think that any time you can help the development community during a bad economic time is a plus,” he said.

Lewis conceded the utility network in Pahrump, with three major water and sewer providers servicing part of the valley, may be a barrier to development due to the cost of extending lines. Pahrump could also control its growth better if the county controlled the spigots, he said. But no matter what the county may do to entice them, when it comes to developers building commercial projects, like shopping centers, Lewis said that’s based more on demographics and how many rooftops are in the community.

The planning department has been cut back since the gung-ho development days before the collapse of the housing bubble in 2008. Lewis acknowledged they have a slim staff.

Lewis joins the Nye County Planning Department as the revisions to the Pahrump master plan are being finalized. He said it’s not a completely rewritten plan, just an update to the original plan drawn up by Tri-Core Engineering in 2003. The biggest part will be the land use element. Lewis didn’t think a major revision of the zoning map would be required after passage of the revised master plan, instead he expects developers will request rezoning on an individual basis.

The Pahrump Regional Planning Commission has attempted to enforce conditions stipulated for conditional use permits. Lewis said back in Merced County, applicants had to pay a fee within 30 days of getting approval, which would pay for staff time to inspect a property in six months or a year to verify they were complying with the conditions of their permit.

While Lewis is sitting in the old Marilyn Gallivan complex at 250 N. Highway 160, the planning department is expected to move into modulars soon to be assembled on the Calvada Eye into a One-Stop Shop for developers, combining the planning department, public works and Pahrump Building and Safety. Lewis said applicants may have to go in multiple doors, but they can get all their business done in one building.