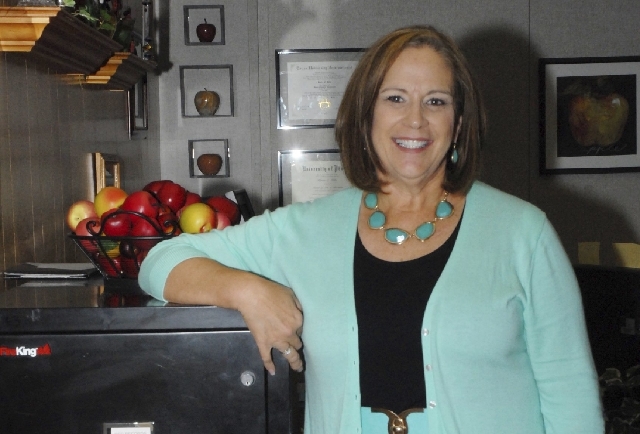 The Nye County School District Pathways program has new leadership. The new principal is Karen Hills, who is the former principal at Amargosa Valley School.

She moved to take over adult education from Doug Stewart who also was the Pathways administrator until the end of the last year.

“I knew I would not be going back this year to Amargosa because of the restructuring plan that had to be submitted to the state,” she said. “Their requirements were that the principal had to be replaced if the administrator had been there for more than two years, which I had and then another issue came up and I asked that I not go back.”

When Hills was asked about the other issue she said she could not comment on it.

The school district believes the move was in the best interest of the district.

NCSD Superintendent Dale Norton made this comment in a press release, “Karen Hills’ experiences, both in and outside of Nye County School District, will benefit all areas of Pathways and the Innovation Education Program. Principal Hills will work with the Assistant Superintendent as well as other district staff to assure continuance of a quality educational program for all students enrolled.”

Pathways is a school where students attend classes mostly at home through the aid of computers. The school requires students to check in for six hours a week and at least 15 hours a week at home.

Hills was a high school social studies teacher for 16 years. She moved to Utah and completed five years of teaching as a residential treatment teacher. There she worked with hard to reach special education students.

In 2009 she came to Nye County. She had a brief stay in Beatty High School until Gary Flood took over. In 2010, Amargosa Valley School needed a principal and she went there.

Hills plans on making some changes to Pathways.

“We had issues with a state audit last year and so a lot of things will be changing at Pathways and how we do things,” Hills said. “The state audit was a good thing.”

Hills said she wants to change the image of the program and how things are done. She said she has researched the regulations regarding programs like Pathways and will be restructuring the program based on her research.

One of the problems she found in the program was in its record keeping.

Last year the students were doing many courses, three or four at a time. The change will allow students to focus on one at a time.

Another change coming is the criteria to get into Pathways. The program will be changed so that students will have to have a recommendation from their school counselor verifying that there is an ability to do independent work. The student must also have a principal’s recommendation.

All current students will have until Aug. 20 to enroll in Pathways. After that new enrollments will be based under the new criteria.

“So it’s not just anybody that can come here,” Hills said. “We should have openings because we had 20 graduates last year. We don’t know how many are planning on coming back.”

The school will have openings for around 200 students this year.

The new principal is also changing the days students attend. The school will be open Monday through Thursday for students to receive instruction. Friday will be an administrative day for teachers to have meetings and for record keeping.

“Attendance has to be done. Those things were not being done here,” she said.

As far as motivating students to complete work Hills said Pathways is different than a normal school.

“We cannot have that one-on-one personal contact that teachers have in a normal school. These teachers have 8 classes with 200 students. Whereas a regular teacher has 35 students. It is a bit more difficult and the kids are not here as often as they are in a regular school. They don’t have as many hours to make that connection,” Hills said.

She said the students will still get motivation from when they complete their three-week course. “Whenever they finish the class they would get a grade. I was looking through with the auditor and there were some students enrolled that did not earn one single credit. We want to be able to motivate those kids and to praise those kids that are doing well. On the Friday, teachers will have the time to contact those kids to get them motivated or make the contact to praise those kids. We can make more home contacts by having that day free,” Hills said.

The principal said with the changes in the days she would like a little more structure in the classroom.

“If they are just coming in and going as they do, it is hard to have a big impact on that big group. I have been in the classroom and kids are coming and going. It is just a different situation. I am kind of surprised that kids are saying they missed the structure of a classroom when it was their choice to come there. They knew it was independent study and they knew it was a distance learning program,” Hills said.