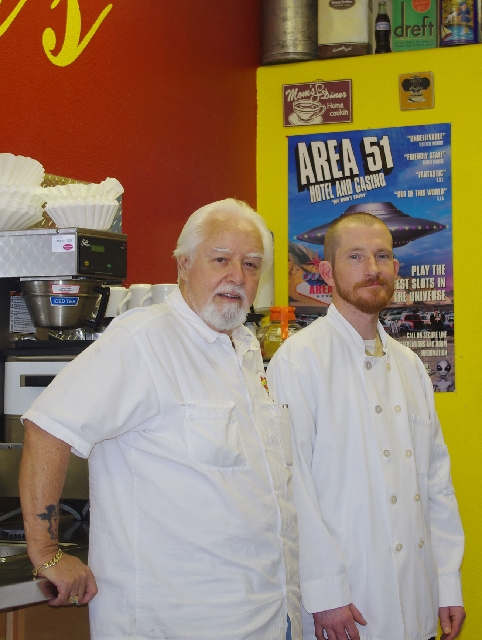 The program essentially allows inmates doing time to leave jail and go to work, returning to the detention facility when their shift ends.

Assistant Sheriff Rick Marshall says he came up with the idea for the program as a way for the county to reduce the expense of housing prisoners. He said the idea also has a moral component.

“The idea is for them to be able to support their family, continue paying child support and other bills or obligations they may have. The last thing we want to do is create a financial burden on them, but on the other hand we want to be mindful of the taxpayer dollars and our fiduciary responsibility to meet our obligations to the taxpayer,” he said.

Already between 20 and 25 Pahrump inmates have been identified as potentially eligible for the program. Inmates in Tonopah may also participate.

One inmate is already back at work.

Aaron Carlson, 37, is playing the role of test case. Currently a jail trustee, Carlson is serving a year in the new Nye County Detention Center. He was arrested on a felon in possession of a gun charge and sentenced to jail in March. Before his sentencing he was a line cook at Mom’s Family Diner, where he’d held a swing shift position for four months. When his court date came up and he knew jail time was likely, he told his boss at Mom’s that he’d be going away.

Mom’s owner Larry Chumley calls Carlson his go-to guy in the kitchen. He told the cook he would hold his job open for him.

But the two were reunited a bit sooner when Chumley agreed to act as the first business in Pahrump to let a jail inmate return to work while still technically a ward of the state.

Chumley said he can appreciate the challenges many inmates face. Not only are they locked up, but often they lose their jobs and are unable to take care of their family’s needs while on the inside. The stigma of jail is then compounded, he said.

“Inmates are like soldiers returning from war. They need to be debriefed when they return to society,” he said.

But with a paying job, an inmate can maintain some semblance of his or her former life and hopefully re-integrate back into normal life after their sentence is served, Marshall said.

For Carlson, the biggest benefit for him is that returning to work allows him to support his two children, daughters who are ages 8 and 10. He said since his incarceration he has been unable to support the girls.

“I felt broke down,” he says about his sentencing and knowing he wouldn’t have any money to send his ex-wife and children. “This gives me a chance to make up for that.”

Marshall says he hit upon the idea for the program while researching ways to reduce costs at the sheriff’s office. Sheriff Tony DeMeo’s budget woes have made headlines for the past year, particularly since a criminal case against the sheriff was referred to the attorney general’s office in April.

Marshall said the work release program is authorized under state law with some restrictions. Nevada Revised Statute 211.120 gives county sheriffs, city police chiefs and town marshals in Nevada the authority to establish prisoner labor programs so long as inmates are thoroughly screened. It is limited to prisoners who have already been sentenced for their crimes and each participant must reimburse the county or municipality for room and board based on their ability to pay.

Marshall says the county isn’t trying to make money off the prisoners, but that is one benefit.

“I just think it’s the right thing to do,” he said. “You know how tough the economy is. If a guy has a good job, if we can help him maintain his normal life, why not? It’s not like we’re letting murderers or people with stalking orders out.”

According to a cursory financial analysis provided by Marshall, it costs taxpayers about $40.29 a day to house an inmate in the county jail. Multiply that by 160 inmates in Pahrump alone, that’s about $6,500 per day, just for room and board, not accounting for detention guard salaries and other expenses.

For inmates in the work release program, depending upon their pay scale, they will owe the sheriff’s office a weekly portion of their paycheck. A preliminary estimate of these charges range from $50 a week for inmates earning between $8.25 to $9.25 an hour all the way up to $200 a week for someone earning more than $24.26 an hour.

Of course, the program comes with some stiff rules and consequences for inmates if they are broken.

According to an application form inmates will be allowed to fill out, there are 22 explicit rules they will have to agree to follow. These range from rules against bringing a cell phone into the jail to counterfeiting work documents to showing up at the jail with any amount of alcohol or drugs in their system. Any violation could result in termination of their ability to work. If they are caught leaving their work site for any reason, they face felony escape charges when caught.

Employers have a few guidelines they must follow as well. These include providing a copy of their business license to the sheriff’s office, allowing police to make unannounced visits to the work area, notifying the sheriff’s office of any change in an inmate’s work schedule or pay, and to agree to not allow family or friends to visit the inmate during working hours. All job sites have to be in Nye County, including construction employment.

Inmates are only allowed to work a maximum of 12 hours a day, six days a week.

To be considered eligible, candidate inmates must be sentenced to at least a week in jail, have no violent felony arrests, have no failure to appear for court charges in the past five years, have no arrests involving moral turpitude or sex offenses, have no restraining or protective orders against them and they can not already be on parole or participating in some other diversion program.

“As with any program, as we start implementing it, there’s going to be changes made to it.”

Already, Carlson came up with an idea for screening inmates for the program — make them work as trustees in the jail first, like he did.