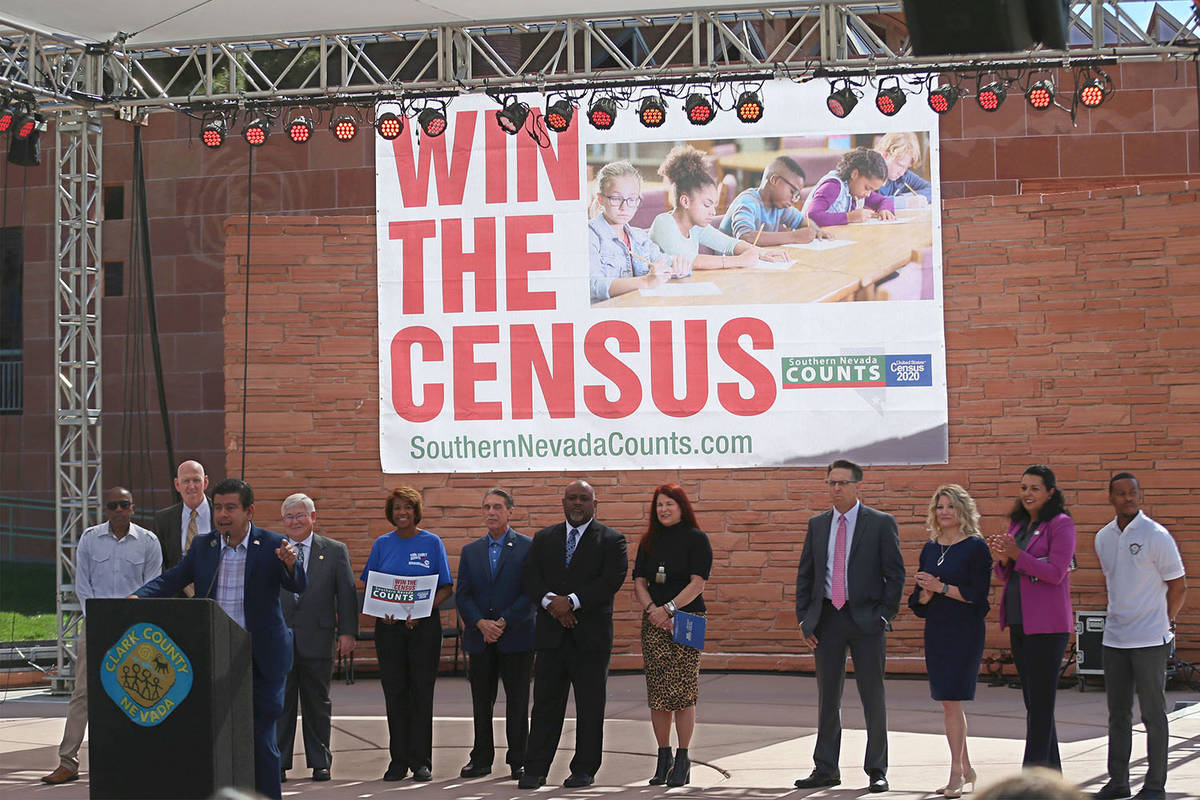 Erik Verduzco/Special to the Pahrump Valley Times Government officials participate at the Southern Nevada 2020 Census Kick Off on March 12.

As the pubic health crisis surrounding the novel coronavirus continues to have an impact on the country and our local communities, new reports of fraudulent activity connecting the 2020 census and a proposed economic stimulus package have surfaced.

An alarming number of residents have reported receiving text messages urging the user to visit a fake census website, 2020census.gov/en.html, and sign up in order to receive a stimulus check from the U.S. government. There is no need to sign up to receive a stimulus check, as recipients are being identified through tax returns filed with the Internal Revenue Service.

“Understandably, there are growing concerns about the public health situation, unfortunately that same concern is a beacon for scammers and fraudulent claims around the census count,” Kerry Durmick, Nevada Census 2020 statewide coordinator, said in a statement. “There is absolutely no connection between the proposed coronavirus stimulus package and the 2020 census count. If residents hear, read or receive texts or emails or any phone calls claiming as such, they are all false.”

According to Durmick, the best way to protect against scams is to know what to look for when approached or when receiving correspondence to the related to the census.

In-person follow-up by census workers will not begin until after April 20-27, when final postcard reminders will be mailed. Reminder letters were mailed March 16-24, and reminder postcards were mailed beginning March 26. A second reminder and a hard copy of the census questionnaire will be mailed April 8-16.

The census form will not ask for information such as a resident’s social security number, citizenship status, credit card or bank information, donations, political party affiliation or anything regarding the 2020 election.

Despite growing concerns about the public health situation, Durmick urges residents to participate in the census and that is still safe to do so using official channels. The census is easier than ever for Nevadans to complete through one of three safe, confidential and quick ways from the comfort of their own homes: online at www.census.nv.gov; via phone at 844-330-2020 or, for Spanish, 844-468-2020); or by mailing in the hard copy of the questionnaire. This helps keep residents and census workers safe.

Residents may report fraudulent activity by contacting the U.S. Census Bureau regional hotline at 844-330-2020 or by emailing nvcensus2020@gov.nv.gov. Additionally, the Nevada Census website, www.census.nv.gov, contains plenty of accurate information to keep residents informed of the process.