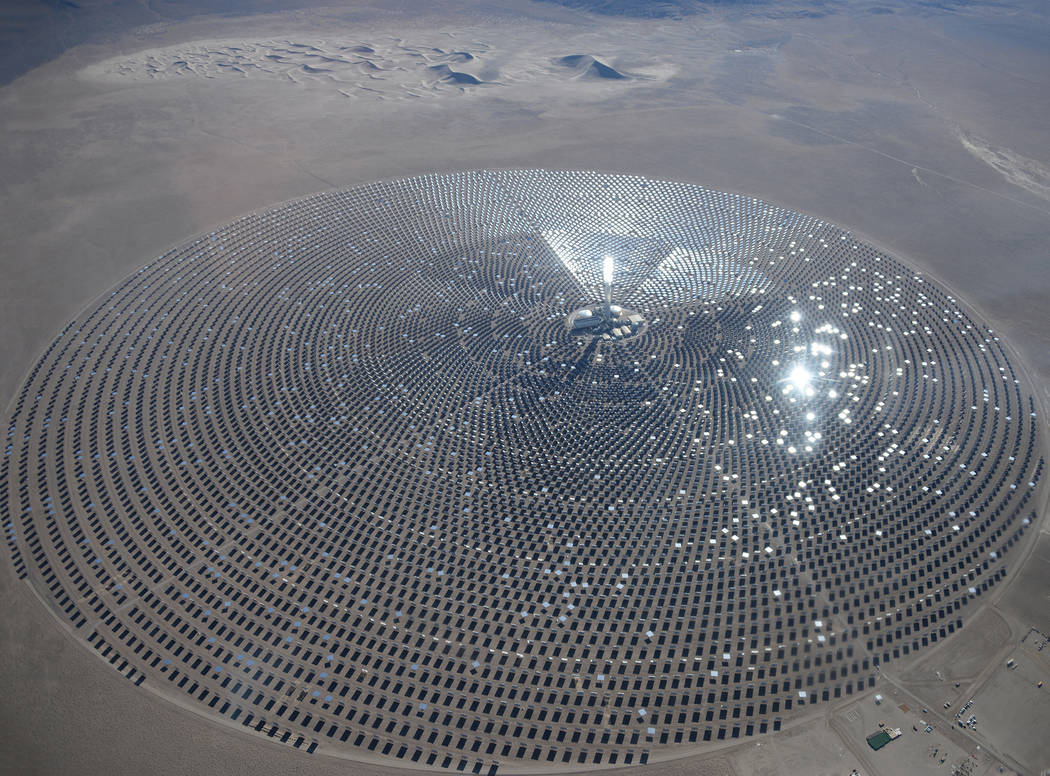 Special to the Pahrump Valley Times SolarReserve's proposed project Sandstone will generate than $100 million per year in salaries and operating costs, and over $600 million in tax revenues through the first 20 years of operation which will help to support local municipalities, school systems, police and fire departments. SolarReserve already operates Crescent Dunes Solar Energy Project 15 miles northwest of Tonopah. 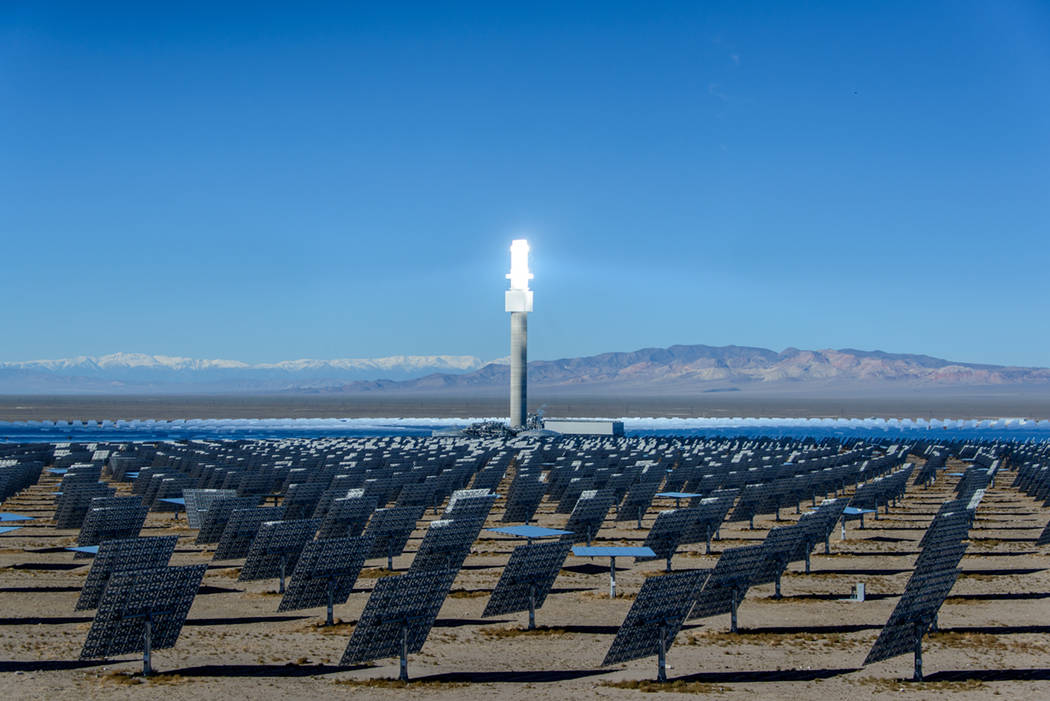 Special to the Pahrump Valley Times Sandstone Solar Energy, LLC, a wholly-owned subsidiary of Santa Monica, California-based SolarReserve filed the notice with the Public Utilities Commission of Nevada on Aug.7 for eight solar thermal towers for 1,600 megawatt on approximately 20,000 acres of public land near Tonopah.

The world’s largest solar and storage infrastructure project is set to take off near Tonopah, and officials said that it could impact the economy of the area.

The notice, filed by Sandstone Solar Energy, LLC, a wholly-owned subsidiary of Santa Monica, California-based SolarReserve with the Public Utilities Commission of Nevada on Aug. 7, calls for eight solar thermal towers for 1,600 megawatts on approximately 20,000 acres of public land in Nye County.

“The notice is for eight of the 10 planned towers, we’re still evaluating exact site location for the additional two towers, ten total for 2,000 megawatts. The two additional towers will be part of the overall Sandstone project,” said Mary Grikas, spokeswoman for SolarReserve.

It’s unclear, however, how Sandstone is going to be financed. Grikas said that the project will compete on pricing against the market, without the need for any special subsidies. SolarReserve already operates Crescent Dunes Solar Energy Project 15 miles northwest of Tonopah that’s backed by a $737 million federal loan.

“At this early stage we can presume that we will undertake a traditional project finance approach involving a combination of debt and equity,” Grikas said in a statement.

Peter Kostes, public information officer with the Public Utilities Commission of Nevada, said the Aug. 7 filing indicates that the company intends to file an application.

“This is in the early stages of the process for us; BLM would have to give the applicant approval to proceed with the application, and at that point, they would file the full Utility Environmental Protection Act application with us,” Kostes said.

Kyle Hendrix, public affairs officer for the U.S. Bureau of of Land Management Battle Mountain District that covers Tonopah, said that it’s “too early” to comment on the SolarReserve’s notice.

“It’s a little bit too early for the BLM to discuss potential concerns for the project, given that we have received the initial application,” Hedrix said.

The Bureau of Land Management requires all solar companies to submit a plan of development in addition to the initial application.

“Once we have a plan of development, we will have a much better idea of what’s being proposed,” Hendrix said.

In its marketing presentation, SolarReserve touted Sandstone as a boon not only to Nevada but also the U.S. economy, as it will create jobs across many sectors.

The project is supposed to create 40,000 direct, indirect and induced jobs across America, and 3,000 construction jobs for the seven-year multi-phase period, in addition to 350 permanent jobs.

Grikas said the projections for jobs and materials are based on SolarReserve’s experience with construction of Crescent Dunes.

“In addition to tax revenues from the project, the Sandstone project will bring significant job, equipment supply, and business opportunities to Tonopah and surrounding communities,” Grikas said.

SolarReserve officials said Sandstone will generate more than $100 million per year in salaries and operating costs, and over $600 million in tax revenues through the first 20 years of operation which will help to support local municipalities, school systems, police and fire departments.

For Tonopah, whose economy has been declining over the past few years, the project could be an economic savior.

Lanya Ramirez, a resident of Tonopah for the past 26 years, and the owner of Cisco’s Restaurant. said that during the construction of Crescent Dunes, a lot of her customers were contractor workers and foreign guests who came to tour the plant.

“It was very, very neat,” Ramirez said. “And then, when they left, we felt that too. It slowed down.”

With new solar towers, Ramirez hopes that she will see an uptick in customers again. With the anticipation of Sandstone and pending expansion of a nearby mine, Cisco’s Restaurant recently doubled its dining room.

Ramirez also hopes that the Sandstone’s economic activity will spur population growth in Tonopah and encourage Nye County officials to reopen the hospital, detention center, and ramp up funding for seniors and the shelter. She said cuts in services and the hospital closure prompted a lot of senior residents to leave Tonopah.

“With solar, we might see our hospital reopen. It’s cause and effect,” Ramirez said.

John McCormick, who oversees clients’ business at several Tonopah businesses including Tonopah Brewing Company, Mizpah Hotel, and Mizpah Club Casino, said that he looks forward to another 10 solar towers being built near Tonopah.

McCormick recalled that during the construction phase of Crescent Dunes several years ago, the occupancy rates in Tonopah were “very high,” however that has changed since construction workers have left the town.

“We were well aware that there was a finite end to this project, and the business that it brought to us,” McCormick said. “Over the past 1.5 years, we have been looking for replacement business, a different market segment, RVs, overnight motor coach and doing more marketing.”

Bruce Jabbour, vice president of Tonopah Hospitality Services, said although the project is “a great thing” for infrastructure for Nye and Esmeralda counties, there may not be enough available housing for all the workers.

“I’m afraid that they might have to travel with the existing housing availability, the amount of employees, the magnitude of the project that’s set forth with eight to 10 solar towers,” Jabbour said.

While the impact of the end of the construction phase at Crescent Dunes was noticeable, Jabbour said the project is only “one piece” of what’s happening in Tonopah.

He said the town also has other employers in the area such as mining and drilling that supply a stream of customers.

“I’m as well looking forward to SolarReserve breaking ground on their project, but I have to get out there and market my business and attract other sources of revenue, not just Crescent Dunes,” he said.