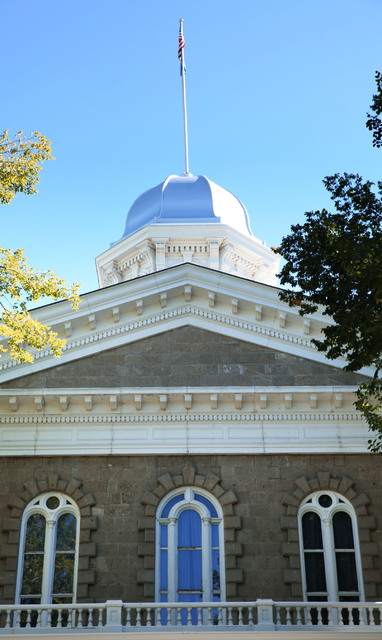 The Nevada State Capital is pictured in Carson City in October. The new year ushered in a handful of new laws in Nevada, ranging from recreational marijuana to registration of mopeds. David Guzman/Special to the Pahrump Valley Times

CARSON CITY — The new year ushers in a handful of new laws in Nevada, ranging from recreational marijuana to registration of mopeds.

Here is a look at what laws took effect on Sunday:

Nevada voters in November approved adult use of recreational pot. But while the law allowing possession of up to one ounce of marijuana takes effect Sunday, it won’t be available for purchase just yet at retail pot shops. The Department of Taxation must first adopt regulations to license and regulate the industry.

Owners of mopeds are required to register their low-speed motorized vehicles with the Department of Motor Vehicles and pay a one-time fee of $33, not including other fees for a license plate, inspection and taxes. The law passed by the 2015 Legislature was billed as an anti-theft measure. Law enforcement said requiring registration of mopeds would help identify vehicles if they are stolen.

The DMV began registering mopeds in November, and in one month 300 were registered statewide. Mopeds do not have to be registered until they are used on public roads.

Nevada Highway Patrol troopers will wear body cameras as part of their uniforms, but likely not until February. The state Board of Examiners in January will vote on a $1.2 million contract to purchase the equipment for about 450 officers who have routine contact with the public.

NHP Chief Dennis Osborn noted patrol cars have dashcam recording devices, so the addition of body cameras will not be a big change for officers.

“The troopers are already used to having digital recording devices,” he said.

People with chronic illnesses who take multiple medications will have an easier time managing their drugs under a new law that provides for synchronization of prescriptions.

Lawmakers heard testimony about how it is difficult for people who live long distances from pharmacies or who rely on others to get their medications when refills come due at different times.

The law allows for partial fills to “synchronize” refill schedules for ongoing medications.

Children with autism will have access to more treatment under a new law that doubles the maximum annual benefit provided by insurance programs to $72,000 from $36,000.

Advocates and child behavioral experts estimate the increased annual benefit would allow the purchase of about 25 hours a week of treatment, up from about 10 hours a week.

Lung and heart ailments suffered by Nevada firefighters, arson investigators and police officers are presumed related to their occupation for purposes of industrial insurance, making those responders eligible for compensation depending on their length of service.

Beginning Sunday, a new provision kicks in that takes into account personal behaviors such as tobacco use. Under the new law, frequent or regular use of tobacco within one year of filing a claim for compensation or departing from a doctor’s prescribed plan of care within three months, excludes a person from the benefit of “conclusive presumption” that their illness was caused by health hazards associated with their job.

Voters approved Question 1 requiring criminal background checks for private gun sales in November, but Attorney General Adam Laxalt, in a formal opinion issued Wednesday, deemed the law unenforceable because it mandates those background checks be done by the FBI.

The federal agency in December said it won’t perform that function because Nevada has its own system to check databases through the Department of Public Safety’s central repository. Language in the ballot initiative specified that background checks will not be done through the state system.