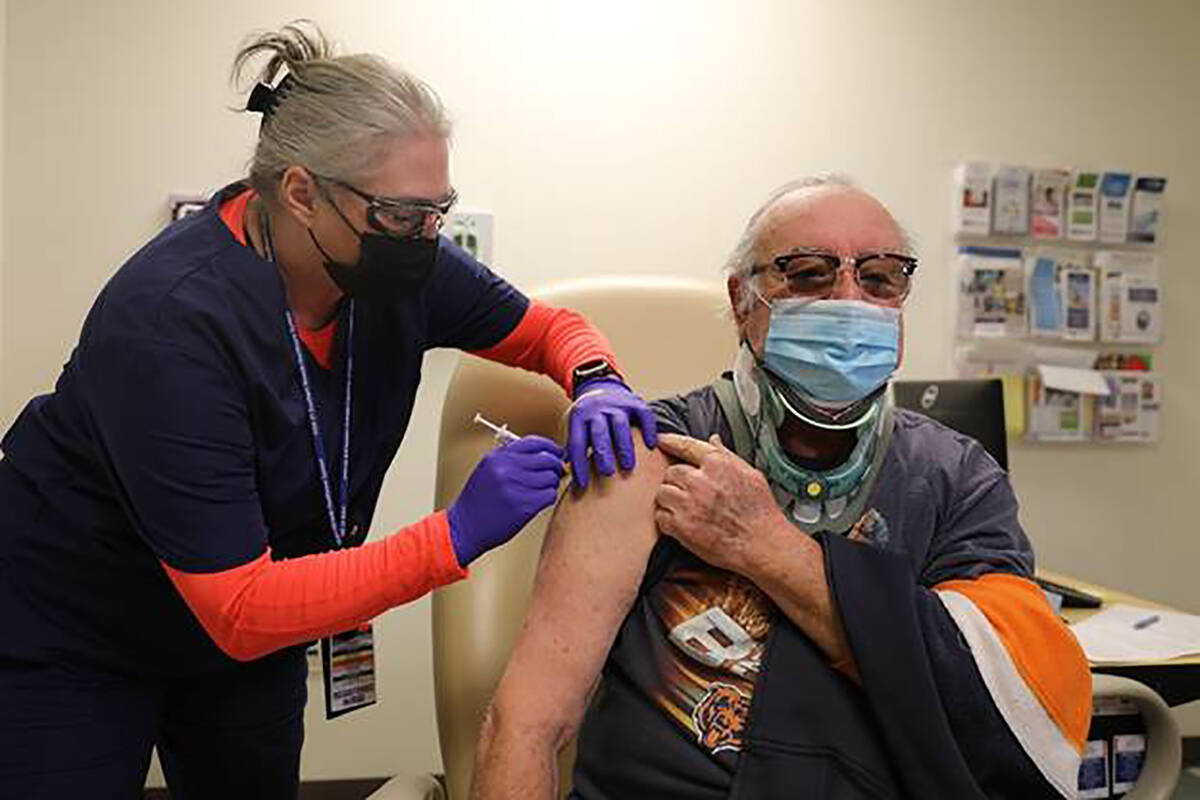 Frank Duszynski Jr., 72, received his first dose of the Pfizer-BioNTech COVID-19 vaccine in this file photo from Feb. 6, 2021 at the Pahrump VA Clinic. Vaccination clinics are closing across the state as the virus eases. (Special to the Pahrump Valley Times)

Five more confirmed deaths from COVID-19 were reported in Nye County from Feb. 7 to Monday, Feb. 14 including four in Pahrump and one in Beatty, according to reports from county officials.

Cases have declined here somewhat since the peak of the omicron-driven surge a few weeks ago. That led Gov. Steve Sisolak to rescind the state’s mask mandate last week, though no county had hit the criteria previously needed to exit it.

At least 118 new cases of the virus were diagnosed in Pahrump during the seven-day window from Feb. 7 to Feb. 14, according to data from county officials, although hospitalizations from the virus have been trending downward.

Nye County’s positivity rate, which tracks the percentage of people tested who are found to be infected is 29.4 percent — still much higher than neighboring Clark County, which saw positivity rates drop to 16.9 percent this week.

Testing facilities will be closing or reducing operational hours across the state in the coming weeks. The Sam Boyd Stadium site in Las Vegas, which initially opened to chaotic lines and long wait times, will permanently close on March 10.

The Pahrump Vaccine Clinic at 1981, Calvada Blvd.. which typically administers vaccines from 9 a.m. to 1 p.m. on Tuesdays, closed this week and will again close on March. 1. Those who seek testing or vaccines can still call 775-751-7070 for an appointment.

The closures are a result of dropping metrics and decreased testing demand, said health district director of disease surveillance and control Cassius Lockett.

“Testing demand went down by 50 percent in a short period,” he said. “It’s also a matter of trying to spare resources.”

In the state’s other closely watched metrics, the 14-day test positivity rate decreased 1.3 percentage points to 19.1 percent, while the number of people hospitalized with confirmed or suspected cases of COVID-19 decreased slightly to 847. That number has shifted significantly from day to day but has dropped quickly over the past few weeks.

As of Wednesday, state data showed that 56.31 percent of Nevadans 5 and older were fully vaccinated, compared with 43.1 percent in Nye County.