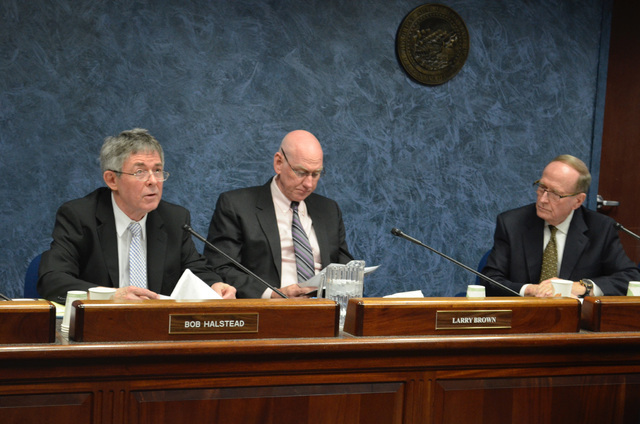 Nevada Agency for Nuclear Projects Director Robert Halstead, left, said state staff and contractors are preparing a commentary on a Nuclear Regulatory Commission update to the brochure on safety of spent fuel transportation. Halstead said there is concern it could encourage new public relations by proponents of the Yucca Mountain repository. Special to the Pahrump Valley Times

An update to the brochure on the safety of spent fuel transportation has some Nevada officials concerned it could encourage new public relations efforts by the nuclear industry and proponents of the Yucca Mountain repository.

The Nuclear Regulatory Commission publication titled, “The safety of spent fuel transportation” is the first full revision in more than 10 years.

The new brochure’s conclusions do not apply to Yucca Mountain shipments as described in the DOE license application and 2008 Final Supplemental Environmental Impact Statement (FSEIS). DOE shipments under Nuclear Waste Policy Act Amendments (NWPAA) would not be regulated by the NRC, except for use of certified casks and prenotification.

“As we have noted in detailed comments submitted to the NRC, risk assessments cited in the brochure do not support these statements as they would apply to Yucca Mountain shipments,” Halstead said.

Among those statements are doses from routine transport would be less than 1/1000 the amount of radiation people receive from background sources each year, less than a one in one billion chance that radioactive material would be released in an accident. If an accident did release radioactive material, the dose to the most affected individual would not cause immediate harm.

Spent fuel is a waste product of nuclear reactors that make electricity.

The Nuclear Regulatory Commission released its final supplement to the Department of Energy environmental impact statement for a proposed nuclear waste repository at Yucca Mountain in May, concluding that the Yucca Mountain impacts on groundwater over one million years would be “small.”

The Nuclear Waste Policy Act set a policy for safe, permanent disposal of spent fuel and other high-level radioactive wastes.

In 1987, the U.S. Congress selected Yucca Mountain as the site to be studied for a repository that would store tons of spent nuclear fuel. The DOE withdrew its application in 2010.

The NRC’s role is to assess whether the proposed facility at Yucca Mountain would meet NRC regulatory requirements, according to the documents.