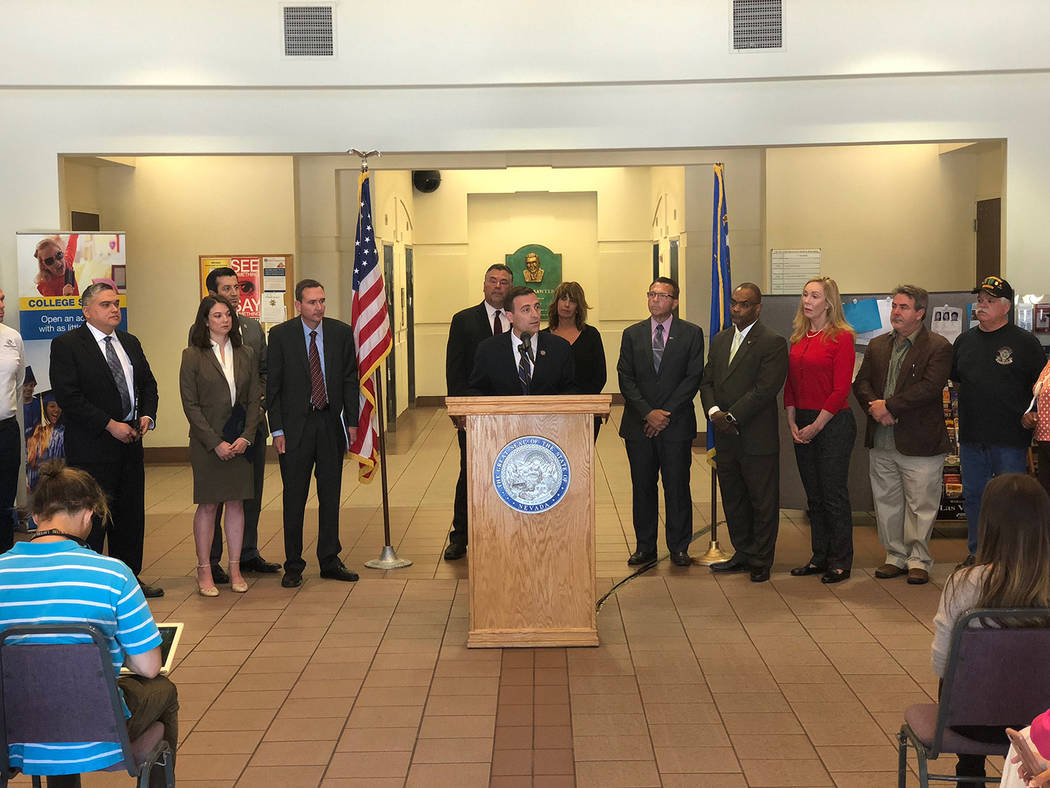 Special to the Pahrump Valley Times Nevada Attorney General Adam Laxalt announced the state's first lawsuit against an opioid manufacturer during a press conference on Tuesday, May 15. The state is continuing to investigate other manufacturers and distributors of prescription opioids as well. 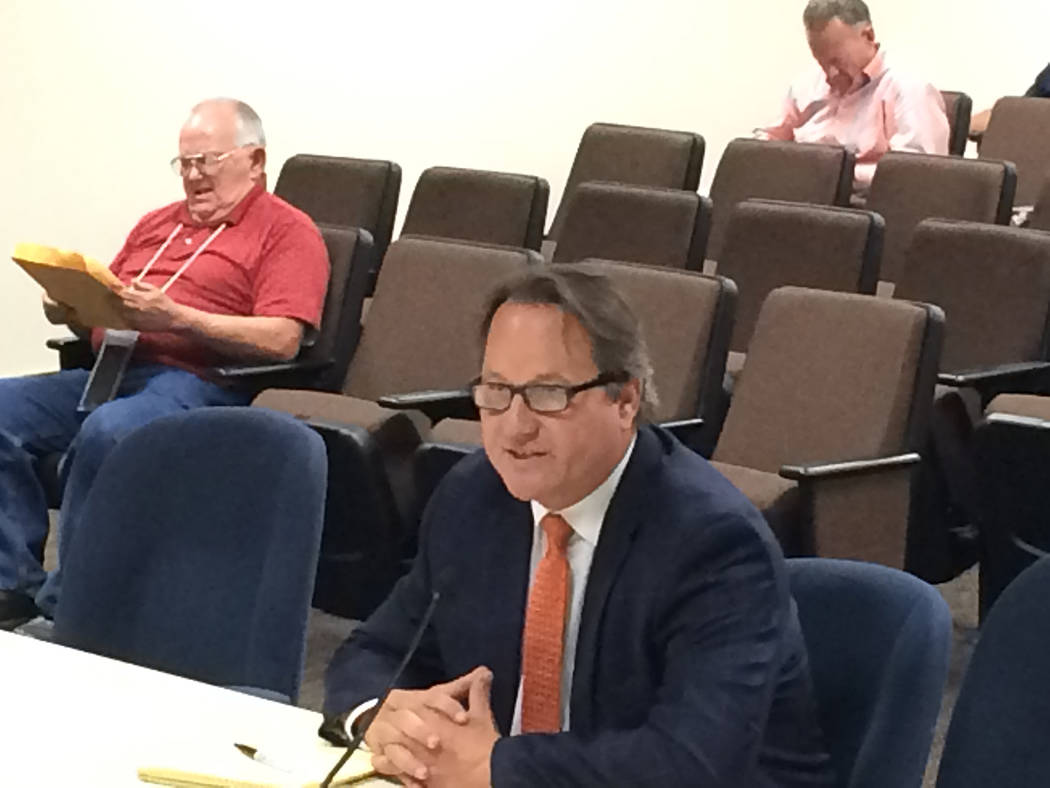 Robin Hebrock/Pahrump Valley Times Baron and Budd representative Archie Lamb appeared before the Nye County Commission on May 15 to give a presentation on the possible pursuit of litigation against opioid manufacturers and distributors. Nye County Commissioners voted 5-0 to initiate legal action. 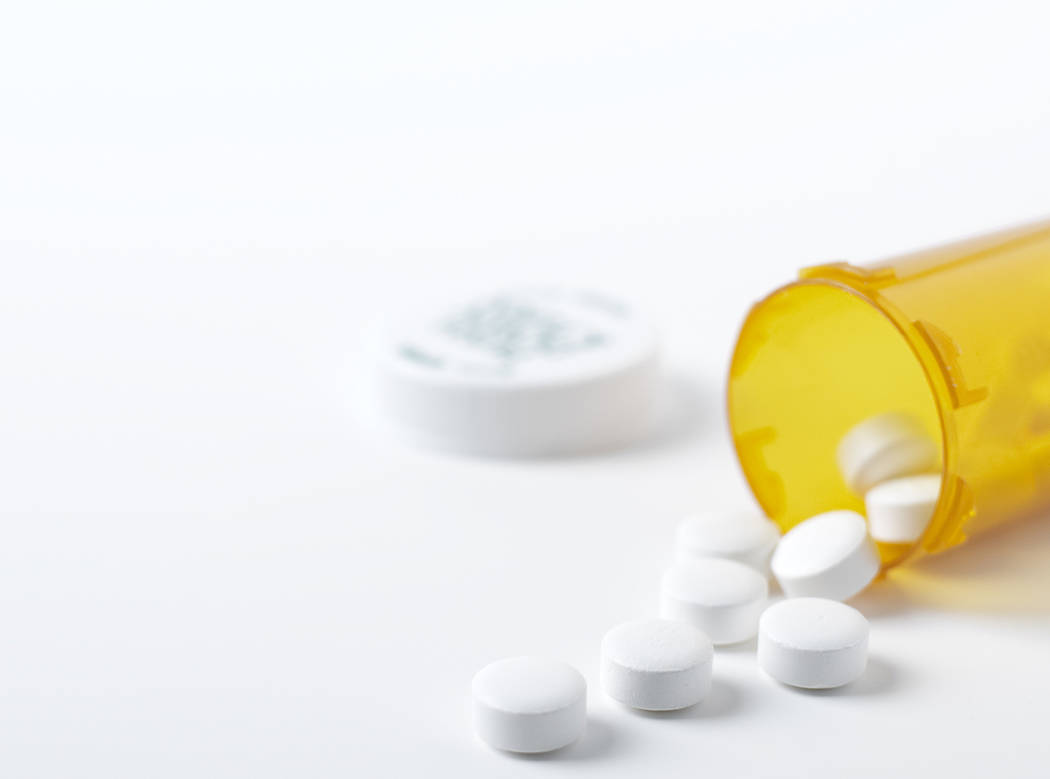 Thinkstock The Nye County Commission voted to move forward in the pursuit of litigation against opioid manufacturers and distributors, selecting the Dallas-based law firm Baron and Budd during its regular meeting.

Nye County and the state of Nevada are taking significant steps in the effort to battle the widespread opioid crisis.

The Nye County Commission voted on Tuesday, May 15 to move forward in the pursuit of litigation against opioid manufacturers and distributors, selecting the Dallas-based law firm Baron and Budd during its regular meeting.

At the very same time, Nevada Attorney General Adam Laxalt held a news conference to announce major action resulting from the state’s investigation into the epidemic, the filing of the very first state lawsuit against an opioid manufacturer, Purdue Pharma LP and its affiliates.

“The lawsuit alleges that Purdue engaged in deceptive marketing regarding the risks and benefits of prescription opioids, fueling Nevada’s opioid epidemic and leading to the opioid overdose death of Nevadans,” a news release from the Nevada Attorney General’s Office detailed.

“The lawsuit, filed by the Office of the Nevada Attorney General’s Bureau of Consumer Protection, alleges that Purdue violated the Nevada Deceptive Trade Practices Act through deceptive promotional activities and materials that falsely denied or minimized the risks of addiction, trivialized the pain management uses, and overstated the benefits of opioids.”

According to the document, Purdue is alleged to have minimized the risks of the use of their medications and downplayed the potential for addiction with claims that signs of addiction are simply caused by under-treated pain, while at the same time overstating the benefits of long-term opioid use.

The AG’s complaint goes much further as well, accusing the manufacturer of denying or failing to disclose the increased risk associated with taking opioids at higher doses, pushing statements on the efficacy of the use of opioids on the quality of a person’s life, which the AG declared were misleading, exaggerating the effectiveness of “abuse-deterrent” opioids to prevent abuse and addiction and overstating the effectiveness of a doctor’s ability to manage patients’ addiction.

Finally, the release noted that one drug in particular, OxyContin, was specifically pointed out, with the AG alleging that Purdue Pharma, “misleadingly promoted OxyContin as providing a full 12 hours of pain relief which it consistently does not.”

Laxalt was not shy about his take on the matter, denouncing the manufacturer for its perceived involvement in the national struggle against opioid addiction and overdose.

“Purdue’s deception lined the pockets of its owners and led to the deaths and hospitalization of thousands of Nevadans,” Laxalt declared. “Since the release of OxyContin, Purdue has engaged in an extensive, well-crafted and highly-targeted deceptive marketing campaign to spread false and misleading messages to health care professionals and patients in Nevada. Purdue must be held accountable for its actions and its role in Nevada’s opioid epidemic.”

When reached for comment, Purdue representatives responded,“We are disappointed that after months of good faith negotiations working toward a meaningful resolution to help the state of Nevada address the opioid crisis, the attorney general has unilaterally decided to pursue a costly and protracted litigation process. We vigorously deny these allegations and look forward to the opportunity to present our defense.”

The company went on to assert that in direct contradiction to the allegations, “We have long been an industry leader in the fight against opioid abuse and diversion and have dedicated significant resources to address the challenge.” Information on these actions can be found at www.purduepharma.com.

The news release noted that although the state has only filed against Purdue Pharma, the investigation into the opioid epidemic continues and there is the possibility that other lawsuits will follow. At this time, the Nevada AG and other litigating states are engaged in ongoing settlement discussions with Purdue Pharma and other opioid manufacturing and distributing sources.

For Nye County, Baron and Budd, along with its legal team consisting of half a dozen other law firms, will seek the recovery of damages to the local communities caused by the opioid crisis. As a group that is representing hundreds of entities in the same matter, the law firm asserted its belief that it has the resources and manpower at hand to appropriately address the situation on Nye County’s behalf, without creating a financial liability for the county in the event that litigation goes nowhere.

Baron and Budd representative Archie Lamb assured the commission that the county would incur absolutely no costs to pursue litigation unless the case eventually results in the county’s success. If the county is awarded monetary recompensation for the damages it has suffered, only then would the law firm be entitled to collect payment for its services. The county would be required to pay 25 percent of any recovery it receives, be it from a compromise, settlement or trial and verdict.

“I was shocked… to see the prescription numbers per capita in Nye County. It’s stunning,” Lamb stated during the commission’s May 15 meeting. “The essence of our case is that the three biggest distributors, Cardinal, McKesson and AmerisourceBergen, conspired with the manufacturers to avoid their legal obligation under the controlled substances act to monitor and halt excessive shipment. You would not have the prescription excess in your population if the distributors had adhered to the law…”

Commissioner Dan Schinhofen expressed trepidation about initiating legal action, remarking that there could potentially be negative fallout as a result. As an example, he touched on the many programs that could be started utilizing funds recovered in a lawsuit that, once those funds dry up, would still need to be funded and the county would have to foot the bill. He also questioned whether the “damages” could actually be quantifiable.

However, the commission ultimately voted unanimously to approve the selection of Baron and Budd, authorizing the Nye County manager to negotiate the terms of and execute the contract.