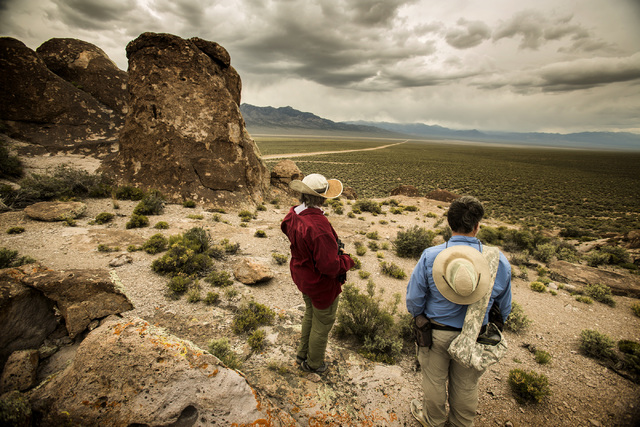 Jeff Scheid/Las Vegas Review-Journal Naturalist and outdoorsman Jim Boone, right, and his wife, Liz, view Garden Valley, which is about a three-hour drive north of Las Vegas, on Wednesday, May 20, 2015. Basin and Range National Monument is one of 27 national monuments that are currently under review by U.S. Secretary of the Interior Ryan Zinke in accordance with the President Donald Trump's April 26 executive order. 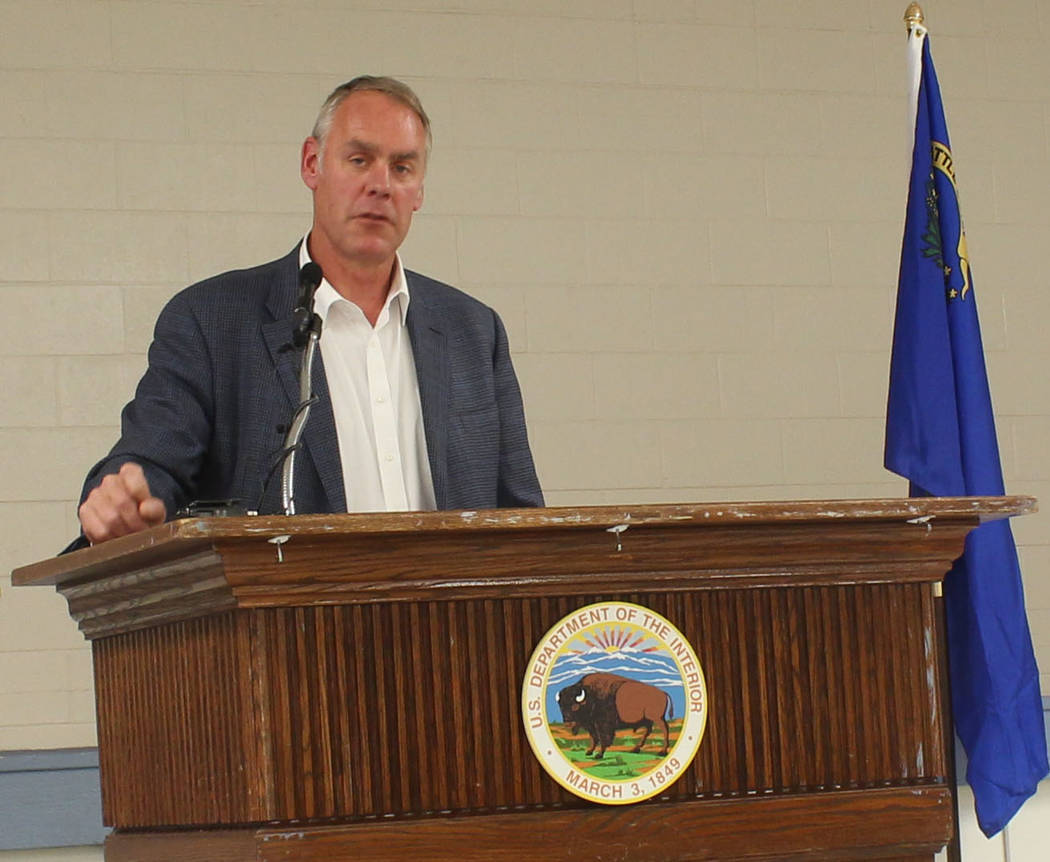 Jeffrey Meehan/Pahrump Valley Times U.S. Secretary of the Interior Ryan Zinke speaks at the Bob Ruud Community Center at 150 N. Highway 160 on June 26, 2017. Zinke is expected to return to Nye County before the end of July for the tour of the Basin and Range National Monument.

While some members of the Nevada delegation celebrated the two-year anniversary of the Basin and Range National Monument, Nye County is awaiting the visit of U.S. Secretary of the Interior Ryan Zinke who could redraw the boundaries of the monument sprawling across remote Nye and Lincoln counties.

Zinke’s visit is expected to take place later in July, however the exact date is still unclear. Alex Hinson, deputy press secretary for the Department of Interior said the dates of Zinke’s trip have not been finalized yet.

Twenty-seven national monuments designated since Jan. 1, 1996, including Basin and Range and Gold Butte in Nevada are currently under review in accordance with President Donald Trump’s April 26 executive order.

On Monday the formal public comment period closed for the review of the national monuments. More than 1.2 million comments were received on Regulations.gov and thousands more were received via traditional mail, according to the Department of Interior news release.

“These comments, in addition to the extensive on-the-ground tours of monuments and meetings with stakeholders, will help inform my recommendations on the monuments,” Zinke said in a press release. “I appreciate everyone who took the time to log-on or write in and participate in our government.”

Zinke has already submitted an interim report to the White House in June recommending the reduction of the Bears Ears National Monument in southeast Utah after touring it for several days. The scale of the 1.3 million-acre monument’s reduction is not yet known.

Zinke didn’t make any comments that would indicate his intentions on Basin and Range and Gold Butte during his stop in Pahrump on June 26, only promising that he will return to Nevada to tour the monuments before the end of July.

Zinke is expected to submit a final report about the monuments to Trump by late August.

Nye County vs. the state of Nevada

The review of the Basin and Range Monument received a warm welcome from some Nye County officials who were chagrined about the designation of the monument in July 2015.

Nye and Lincoln counties were unanimous in their opposition to the designation of the 704,000-acre Basin and Range National Monument by former President Barack Obama.

Nye County Commissioner Lorinda Wichman said she is “confident” that Zinke will be able to assess the necessity for over 700,000 acres achieving the protection of a national monument status under the use of the 1906 Antiquities Act.

“That designation removed the area from the multiple use mandate of the Federal Land Planning Management Act of 1976,” Wichman said in an email. “The Basin and Range National Monument area is beautiful, very much like the rest of Nevada.”

Dan Schinhofen, chair of the Nye County Commission, said the Basin and Range National Monument was created to protect “less than 1 percent of the actual area it withdrew.”

“The actual ‘monument’ is a small piece of private property and as such, is a waste of a monument designation. Nye and Lincoln counties voted unanimously not to remove this land and moving forward, if any of it is kept it should only be a small part of public land needed,” Schinhofen said.

On the contrary, Democratic members of the Nevada delegation issued statements earlier this week celebrating the two-year anniversary of the monument and urging Zinke to leave it intact.

“Monuments like Basin and Range and Gold Butte are important to the people of our state and we must do all we can to guarantee they remain protected for future generations,” Kihuen said in a statement.

Separately, Kihuen sent a letter to Ryan Zinke urging him not to make any changes to Basin and Range and Gold Butte.

The land at the 27 monuments currently under review is preserved under the Antiquities Act of 1906. The measure gives the president the authority to designate public lands as national monuments without congressional approval. Such designations protect areas from mining, grazing and oil production.

If Trump revokes any of the national monument proclamations, he will be the first president in U.S. history to do so.