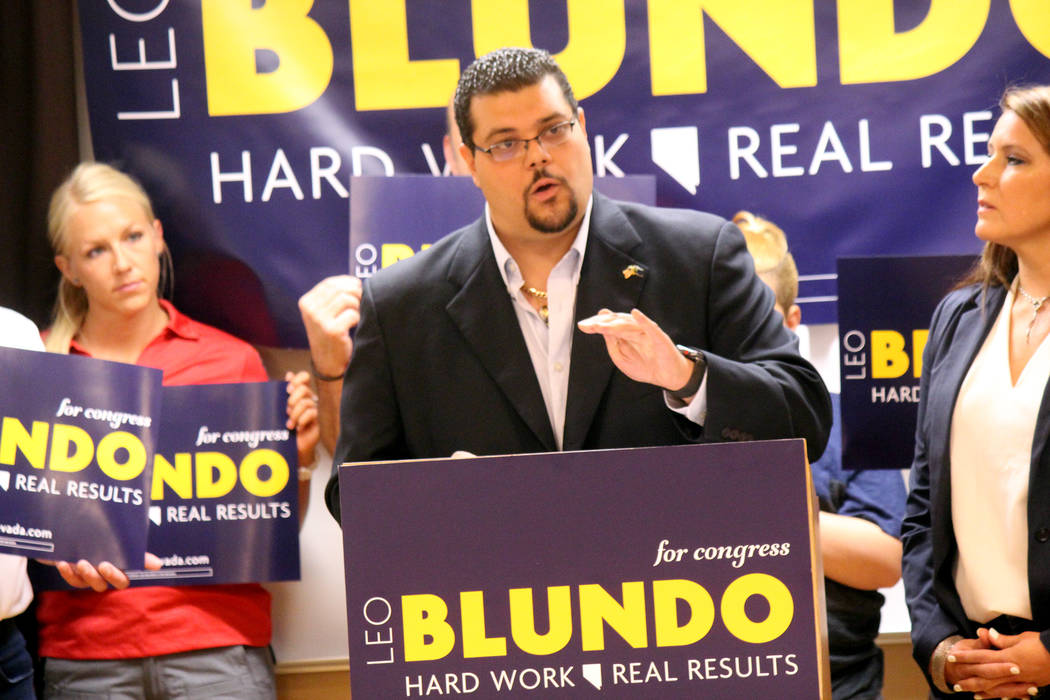 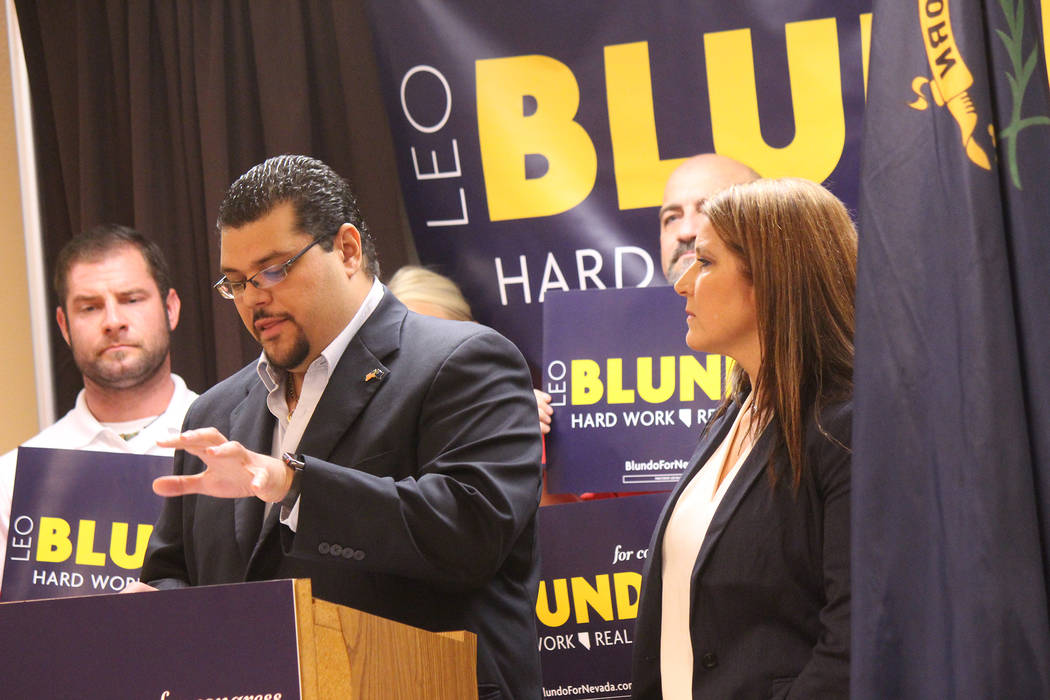 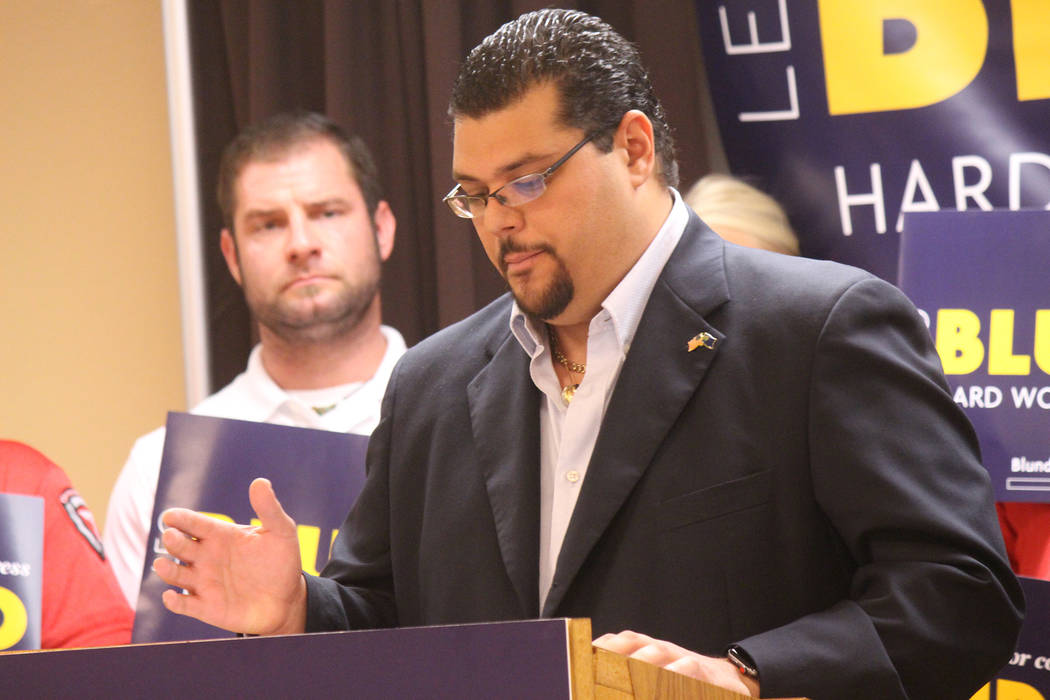 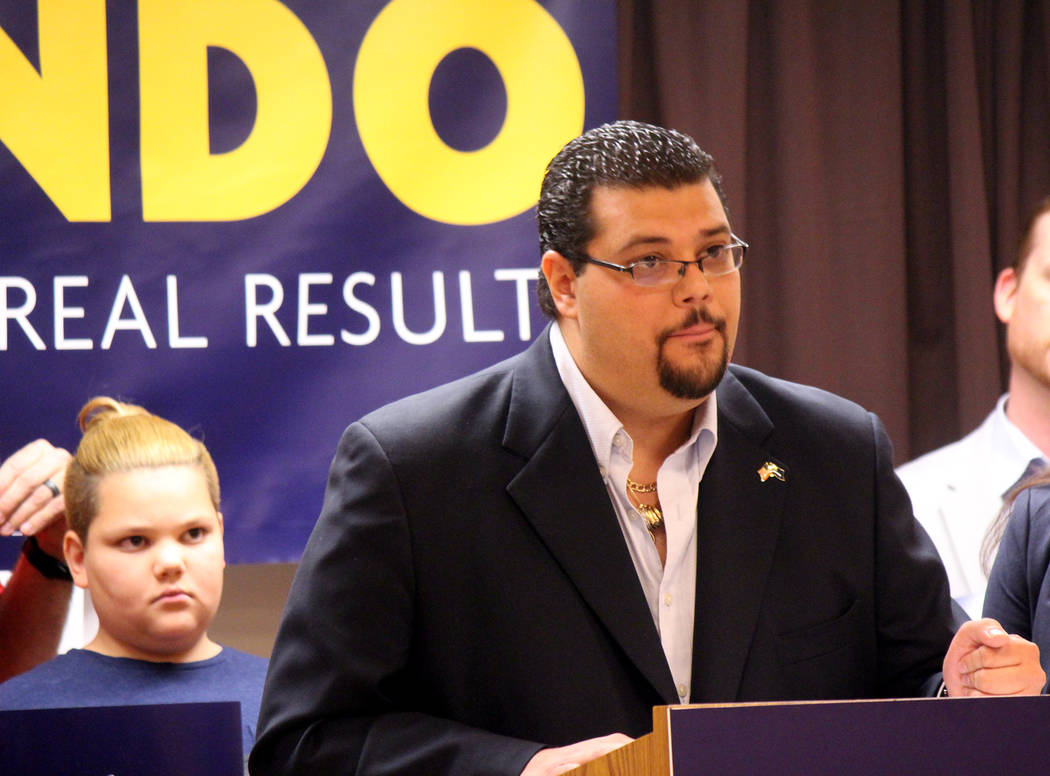 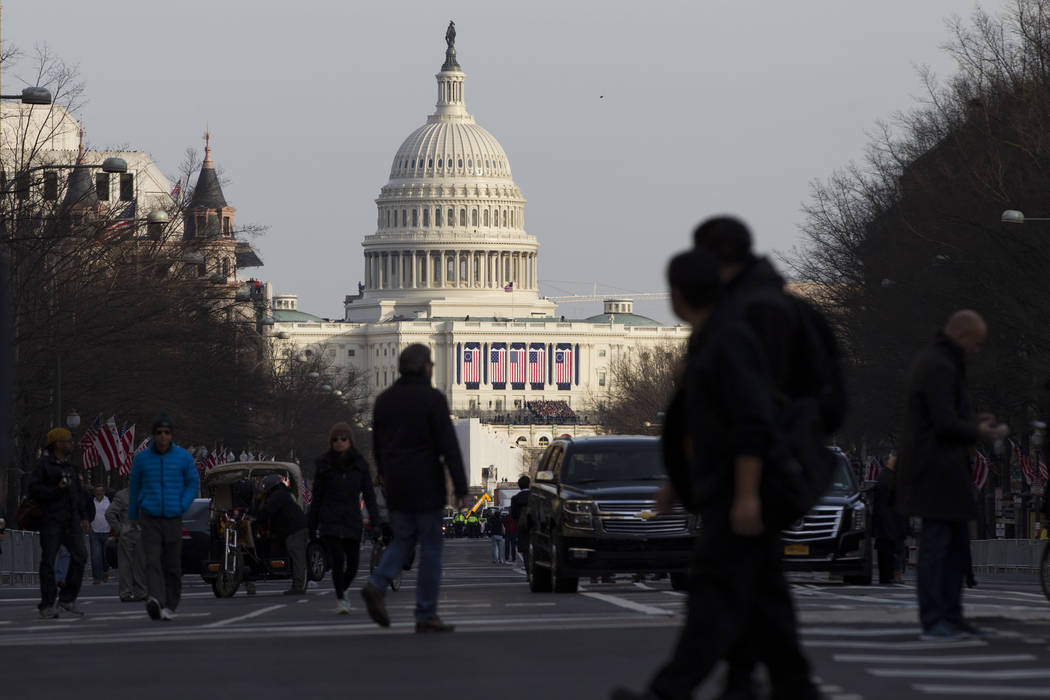 Blundo, owner of Carmelo’s Bistro in Pahrump and a Nye County commissioner, announced his candidacy for the District 4 congressional seat in Nevada on the Republican ticket at his alma mater, Bonanza High School, on Wednesday during a news conference to a room full of friends, family and supporters.

During the conference, Blundo said “Washington is full of empty suits, professional politicians who don’t know what it means to work long hours, just to get by, or disconnected or don’t understand the challenges of real Nevadans like you and me face every day who think Washington knows better than we the people do about how we should live our lives in the pursuit of life, liberty and happiness.”

Blundo was introduced by his fiancee Melissa Gebhart, who also gave a short speech.

In an off-stage interview, Blundo said he wanted win over the voters of Nevada on what he referred to as “kitchen table discussion topics” that he covered in his speech. These included health care reform, immigration reform, improving infrastructure and other topics.

“I’m working to fix, once and for all, the broken immigration system,” Blundo said during his speech. “I’m running to make health care more affordable for working families. I’m working to fix our crumbling roads and infrastructure.”

Immigration was a big topic for Blundo, whose father immigrated from Sicily and his mother from Brazil.

“My parents came here legally to pursue the American Dream,” Blundo said during his speech. “Right now, there are hundreds of thousands of people who are trying to break our laws and enter the country illegally. We need to secure our border, and we need to fix our broken immigration system that punishes people who are trying to do the right thing, just like my parents did, trying to do the right thing and come here legally.”

Blundo said he is in support of President Donald Trump.

“I think that the president has done a phenomenal job,” Blundo said. “He’s been keeping his promises, and I look forward to working with the president.”

In an off-stage interview, Blundo was asked about his support for the border wall.

“I am supporting securing our borders,” Blundo responded. “You cannot have a country if you don’t have secure borders.”

Blundo also spoke about health care in his speech. The congressional candidate said the health care system was a mess prior to “Obamacare” and after. Blundo also said Obamacare made things worse.

“Families are stuck with high premiums, high co-pays, undecipherable paperwork, and you know exactly what I’m talking about when you go fill that paperwork out,” Blundo said. “Not to mention those surprise bills you get in the mail. We need to create a health care system that allows patients to control their own health care and cuts the cost on you.”

Blundo was also asked about his stance on Yucca Mountain.

“The Nye County Board of County Commissioners has voted in the past, and I stand with their position to hear the science and look at all our options we’re talking about, and that’s what you’ve seen me time and time again represent that same message on the record in Congress,” Blundo said.

Blundo said he was born in New Jersey but has been Nevada for more than 25 years and owned Carmelo’s in Pahrump for 12 years.

“During that time, I have been poor, working as a kid, a young man to help with food on my family’s table,” he said.

Blundo continued: “I’ve been a busboy, a server, I’ve worked on cars, I’ve picked up side jobs. Eventually, I saved up and started my own business. This is the very definition of the American Dream. I know what it means to work hard every day to make ends meet. These are the personal experiences I take to Congress to represent the hard-working people who work every day to make ends meet here in Nevada.”

Blundo said he will remain in his commission seat during his campaign. He was elected to a four-year term on the commission in 2018.

The district was created following the 2010 Census with the first race being in 2012.

Including Blundo, a field of at least five Republicans is expected to compete in the race for Nevada’s seat in the 4th congressional district. They also include Lisa Song Sutton, former assemblyman Jim Marchant, Samuel Peters and Charles Navarro, according to information from the Federal Election Commission’s website.

Navarro was the deputy district director for former U.S. Rep. Cresent Hardy, who won the District 4 seat in 2014.

Hardy took the seat away from current U.S. Rep. Steven Horsford who won the district in 2012. Horsford won election in 2016 for the 4th congressional district after former U.S. Rep. Ruben Kihuen, D-Nevada, did not seek re-election following accusations of sexual misconduct.