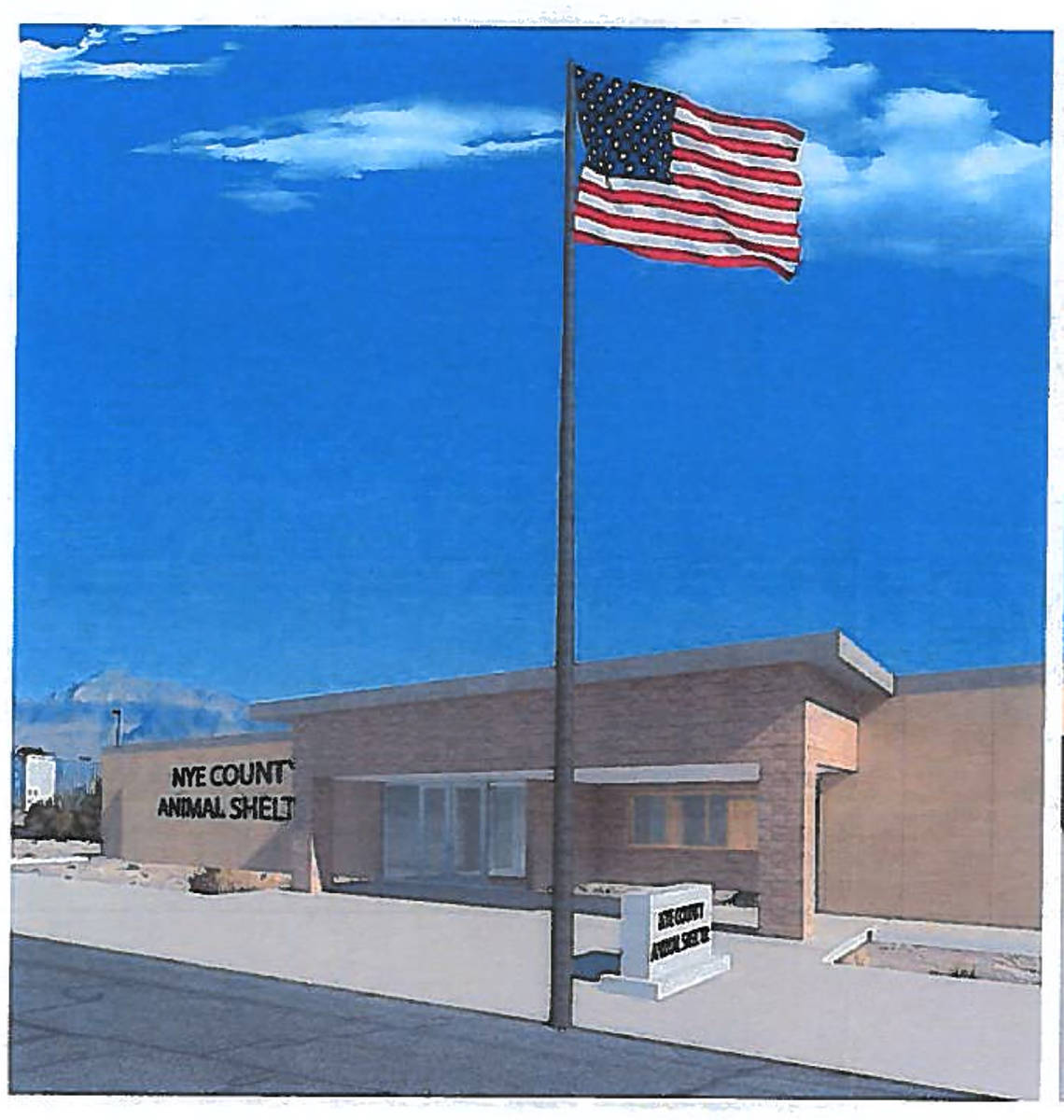 Special to the Pahrump Valley Times A visual rendering of the exterior of the new animal shelter in Pahrump, contained in the backup information for the Nye County Commission's Oct. 6 meeting. 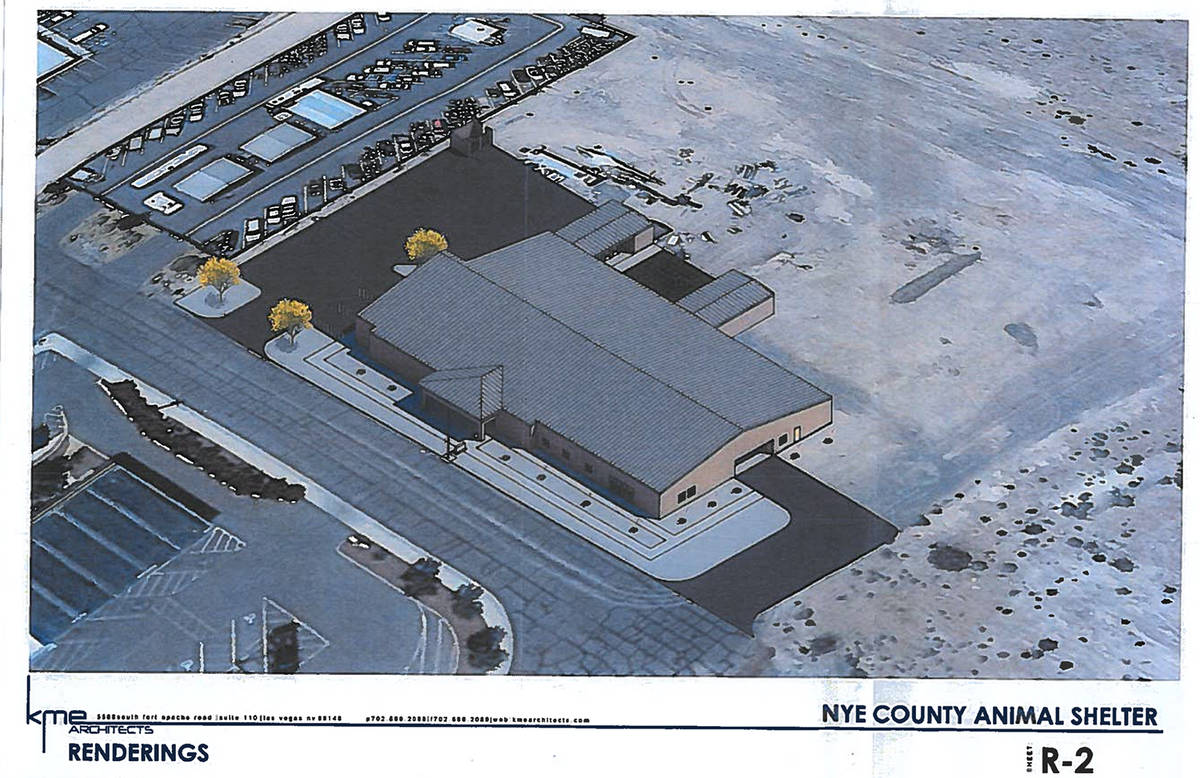 Special to the Pahrump Valley Times This rendering shows a birds-eye view of the new animal shelter. 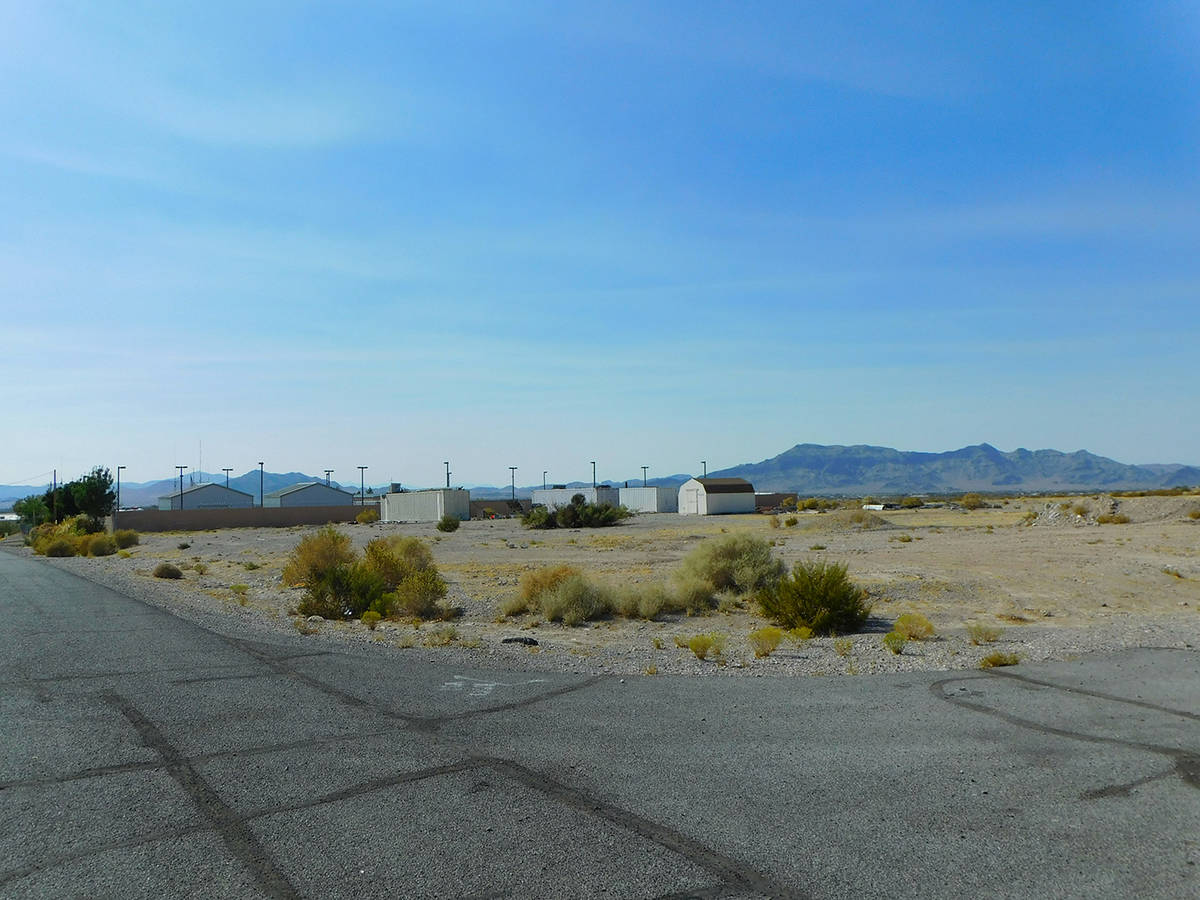 Robin Hebrock/Pahrump Valley Times This photo shows the land on which the new animal shelter will be built, located at 1510 E. Siri Lane.

After many years of demand from the local community and repeated discussions at the commission level, Nye County is finally prepared to do away with a decades-old, deteriorating facility and move forward on the construction of a brand new animal shelter in the Pahrump Valley.

During its Tuesday, Oct. 6 meeting, the Nye County Commission took steps to initiate the process to see the new animal shelter on its way from concept to reality, granting approval of a construction contract and scheduling a public hearing to address a resolution necessary to acquire a loan as the funding source for the project.

The construction bids submitted for the project differed vastly across the board in terms of pricing, with Top Rank Builders coming in at the lowest bid of $3.5 million, B&H Construction coming in second with a bid of $3.9 million, NDL Group bidding $4.5 million and California-based Facility Builders and Erectors submitting a bid more than double the lowest estimate provided at $7.8 million.

In typical cases, contracts such as these are awarded to the lowest bidder but in this instance, the county was unable to select local company Top Rank Builders because that company’s bid was considered to be “non-responsive.” This was due to the fact that the bidder’s package from Top Rank was missing a crucial component, the bidder’s bond, which is required by Nevada Revised Statute. Therefore, Henderson-based B&H Construction was chosen for the multi-million dollar construction contract, but not before an intense round of debate and disagreement over the course of an hour and a half.

Throughout the discussion at the Oct. 6 meeting, Nye County Commissioner Donna Cox repeatedly attempted to sway her fellow commissioners toward awarding the contract to Top Rank, despite multiple explanations from county staff that without a bidder’s bond, doing so would be a violation of Nevada law.

Cox then changed tactics and suggested the county reject all the bids put forward and redo the process but this, too, was something her fellow commissioners said they could not support, as all of the bids had already been opened and the pricing information contained within made public. In the end, Cox said she was disappointed there was seemingly nothing the county could do to fix the situation so it could utilize a local company but she ultimately voted in favor of the motion to award to B&H.

Cox wasn’t the only one with arguments against awarding the contract to B&H, either. Representatives from NDL Group, a Las Vegas based company, made an effort to dissuade the commission from choosing B&H, asserting that in their opinion, B&H’s bid was “non-responsive” as well. The bid from B&H did not include a roof over the outdoor dog area, something NDL Group homed in on. When B&H submitted additional backup that morning, NDL Group appeared incensed, claiming that doing so essentially amounted to B&H being given the opportunity to rebid on the project. However, while the letter submitted at the meeting did state that B&H would include a roof over the aforementioned dog area, the price of their bid did not change.

Nye County Commission Chairman John Koenig, who has been championing the new animal shelter throughout his term in office, handed the gavel over to vice chair Debra Strickland in order to make the motion to award the construction contract to B&H Construction, contingent upon the securing of a loan by the county to fund the project. That motion passed with all in favor.

The new Pahrump Animal Shelter is set to be built at 1510 E. Siri Lane, not far from where the current shelter resides. The county’s conceptual outline for the new facility detailed a large building of roughly 14,000 square feet that would include more than 100 total kennels, a majority of which would be indoors, rooms specifically for felines and a large outdoor open courtyard, along with space for Nye County Animal Control and rooms dedicated to clinic activities.

B&H Construction comes with 28 years of experience and the company already has a familiarity with the county, having worked on a variety of other projects locally. These include the construction of the Southern Nevada Detention Center as well as Floyd Elementary School and an addition/renovation at the courthouse in Pahrump.

The bid from B&H Construction included a breakdown of costs by type. Engineering of the steel building, along with the steel itself and freight delivery costs came to $404,500. The price of the concrete slab was listed at $311,520 while the in-ground electrical and plumbing were estimated at $766,155. The erection of the steel building was priced at $275,000 and the interior buildout, by far the priciest portion of the project, came in at $2,217,246. The total cost for the project was bid at $3,974,421.

As stipulated in the contract, B&H will have no more than 180 calendar days from the notice to proceed date in which to complete the project. However, the notice to proceed cannot be given until the commission has secured a loan to fund the project. The first step in the process to obtain the necessary funding will be the approval of a resolution authorizing a medium-term obligation. The county will then have to obtain approval to enter into a loan agreement by the Nevada Department of Taxation. A public hearing on the county resolution to authorize a loan for this project is scheduled for the Nye County Commission meeting on Tuesday, Oct. 20.