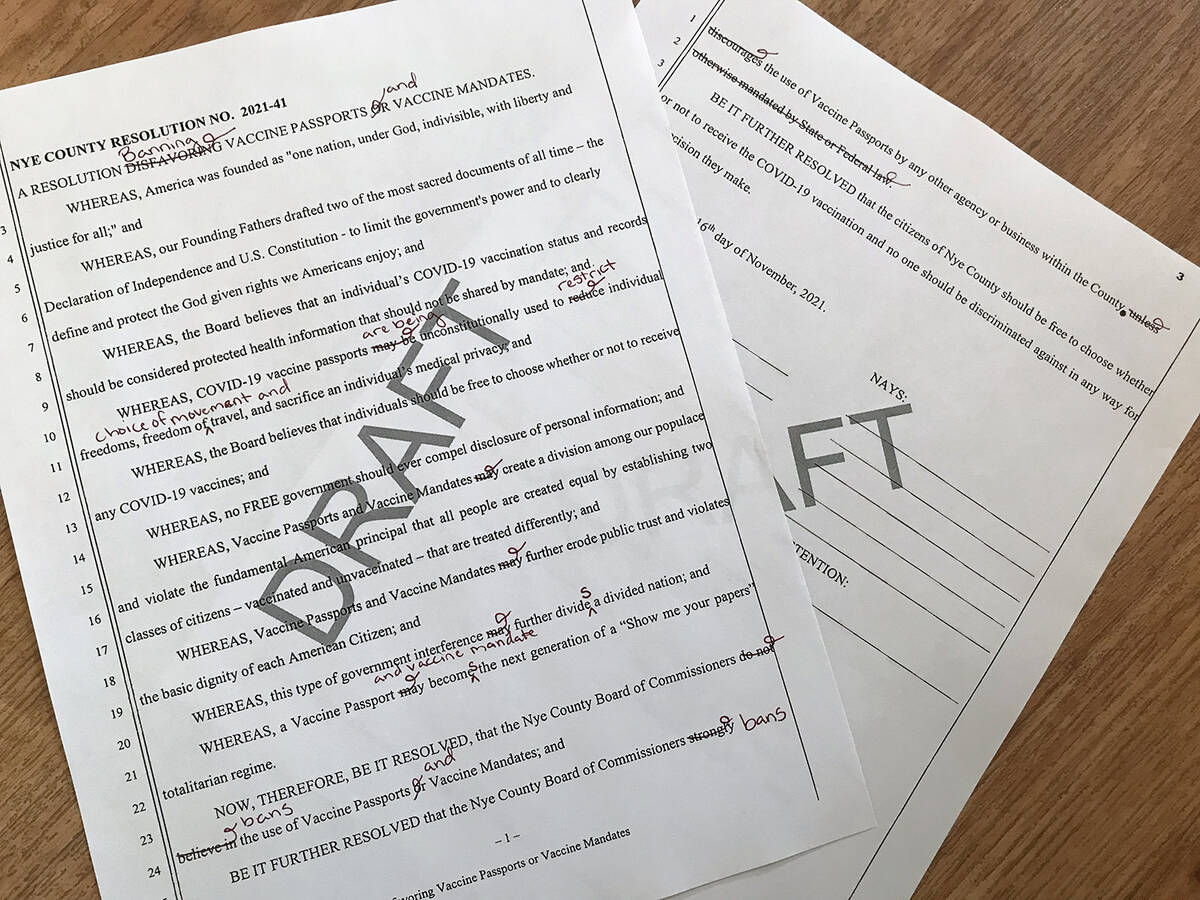 Robin Hebrock/Pahrump Valley Times This photo shows a marked-up copy of the draft of Nye County Resolution 2021-41, addressing vaccine mandates and passports, which saw a variety of changes before being adopted by commissioners this month. The amended version is not yet posted for public review. 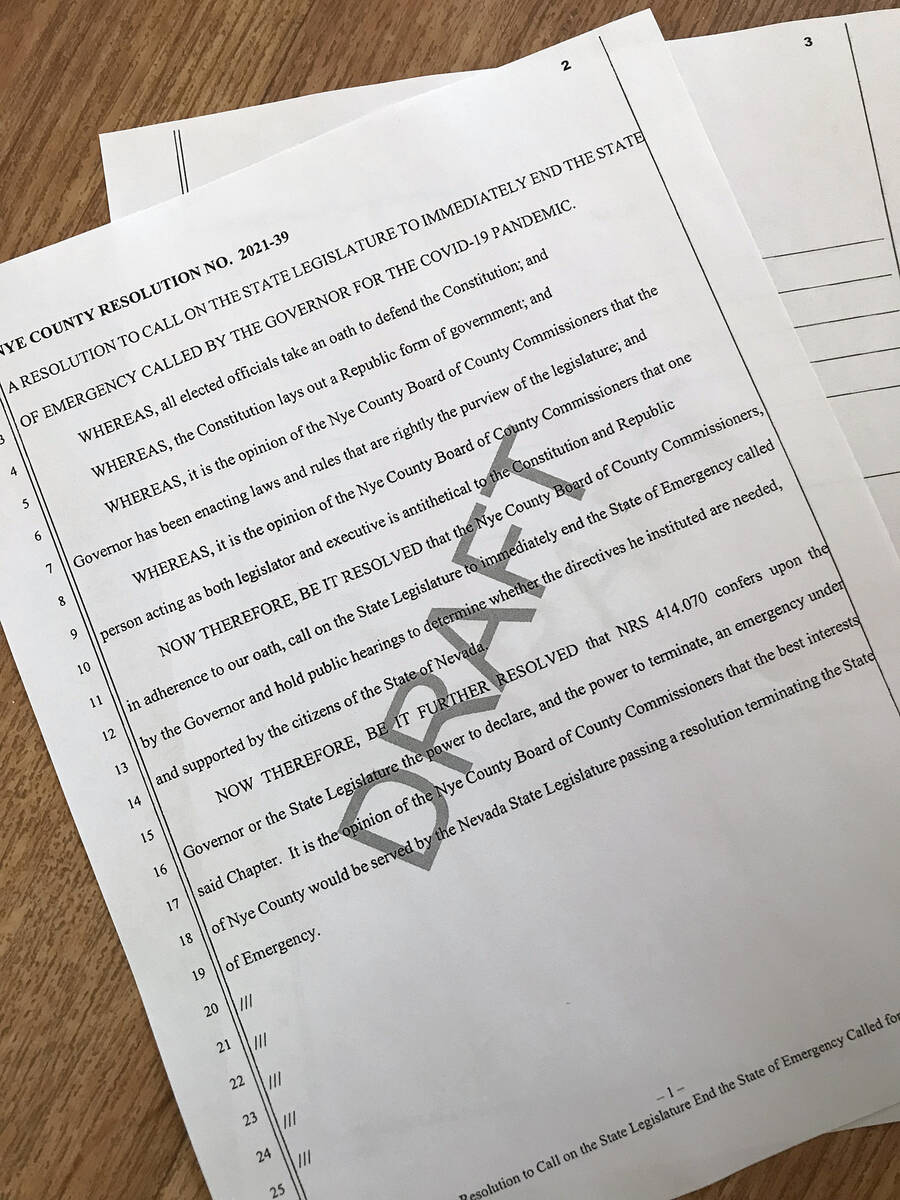 Robin Hebrock/Pahrump Valley Times This photo shows the draft of Nye County Resolution 2021-39 which calls for an end to the state of emergency in Nevada due to the COVID-19 pandemic. This resolution passed as proposed, with no changes made.

Right here in Nye County, that battle has been playing out for months now, with Nye County commissioners repeatedly taking stances in conflict with mandates issued by the state of Nevada and recommendations from federal health agencies.

One such example of the county’s constituent pushback on COVID-19 is its masking policy, which states that no one, be they staff or members of the public, is required to wear a mask while in a county-owned facility. But the mask policy wasn’t the first time that Nye County clearly signaled its resistance to the multitude of mandates that arose as a result of the COVID-19 pandemic.

“I think we are clear past 600 days of this emergency. I am still looking currently today for where the state of emergency is. It appears to me to be a continuous power grab by the governor who drunkenly will not release the power back to the Legislature, back to the people,” Blundo asserted.

Commissioner Donna Cox added, “Originally, I believe the time was 60 days for an emergency order and then it was set to go before the Legislature for an expansion, but it didn’t get there. But they keep extending it by putting more emergency mandates on it. I don’t even know how legal that is.” Cox then noted that she believes COVID-19 testing is faulty so she has no faith in the numbers that are being reported and she too desires to see the state of emergency terminated.

As for commissioner Bruce Jabbour, he turned to humor amid a tense and frustrating topic. “I agree with you… And I would tell you all a COVID joke but 99.9% of you wouldn’t get that either!” he remarked to general laughter.

With each of the five commissioners obviously on the same page when it came to the item, it was a quick one that met with unanimous approval.

The commission then moved on to the next COVID-19-related resolution, No. 2021-41, addressing vaccine mandates and vaccine “passports” in Nye County.

This item was not quite as simple, however, with Cox requesting a plethora of changes to the document before it was put to a vote. As originally drafted, the resolution stated that the county “disfavors” vaccine mandates and vaccine passports and used other verbiage that Cox felt wasn’t strong enough. Instead of using the phrase “disfavors” Cox asked that the document delineate that the county “bans” vaccine mandates and passports, among several other amendments.

There was also some contention over the legality of the document, with Nye County Deputy District Attorney Michelle Nelson telling commissioners that the resolution was not enforceable. Resolutions do not carry the weight of law, as they are only statements of intent, and even if they did, she said, state and federal law takes precedent. In the case of vaccine mandates, Nelson noted that there are lawsuits challenging the presidential order which are now pending in district court but no final ruling has been made, so the county’s hands are essentially tied until such time that the presidential order is officially overturned.

Commissioner Frank Carbone jumped in to argue that he believed a presidential order only applies to the federal level and Cox concurred. It was obvious that the commissioners and the DA’s office were at odds with one another when it comes to the interpretation of the law and despite Nelson’s explanation that the resolution incorporating Cox’s changes does not pass legal review, commissioners were ready to move forward with it anyway.

Legality is not the only snafu with the resolution banning vaccine mandates and passports, however. Nye County Sheriff’s Capt. David Boruchowitz read a letter into the record from Sheriff Sharon Wehrly detailing the impact that such a resolution could have on the sheriff’s office.

Wehrly noted that her office has two contracts that are contingent upon the federal vaccine mandates, including one for housing ICE inmates and another with the Nevada National Security Site and the U.S. Department of Energy, which comprise approximately 29 jobs in the detention centers and another five at the NNSS. Her letter emphasized that she does not take a stand one way or another on the resolution itself but she wanted the commission to be aware of the effect their decision could have on the sheriff’s department’s operations.

Dubious validity and a potential loss of revenue to the sheriff’s department notwithstanding, commissioners ultimately voted 5-0 to adopt the resolution banning vaccine mandates and vaccine passports in Nye County but this is not to be the last action taken by the county in its opposition to this particular subject.

As Carbone pointed out that afternoon, “This is not a law. This is what we would like to have. If you want to make that strong, you put together an ordinance and then see where you go.”

Just before the meeting came to a close that evening, Blundo turned to Nye County Manager Tim Sutton to ask that an ordinance be brought forward to make the county’s resolution banning vaccine mandates and passports into a local law.

“The concern is not the form that the action takes, it’s with the authority and the subject matter over which the board does or does not have control. So whether you pass a resolution or an ordinance, if the board has no authority to do it, either way it’s going to be meaningless,” Sutton replied.

Blundo, clearly not happy with this response, then retorted, “I guess then someone could contest that in court.”

Readers can review Resolution 2021-39 calling for the state of emergency to be terminated, which was passed as drafted, by visiting www.NyeCounty.net and clicking on the “Meeting Center” link. The resolution is included with the backup information for agenda item #26 on the Nov. 16 agenda.

The original draft of Resolution 2021-41, regarding banning vaccine mandates and passports, can also be found with the Nov. 16 agenda under item #28 but this is not the version as passed by the commission. That resolution was heavily amended and the corrected version of that document has not yet been posted to the county’s website.