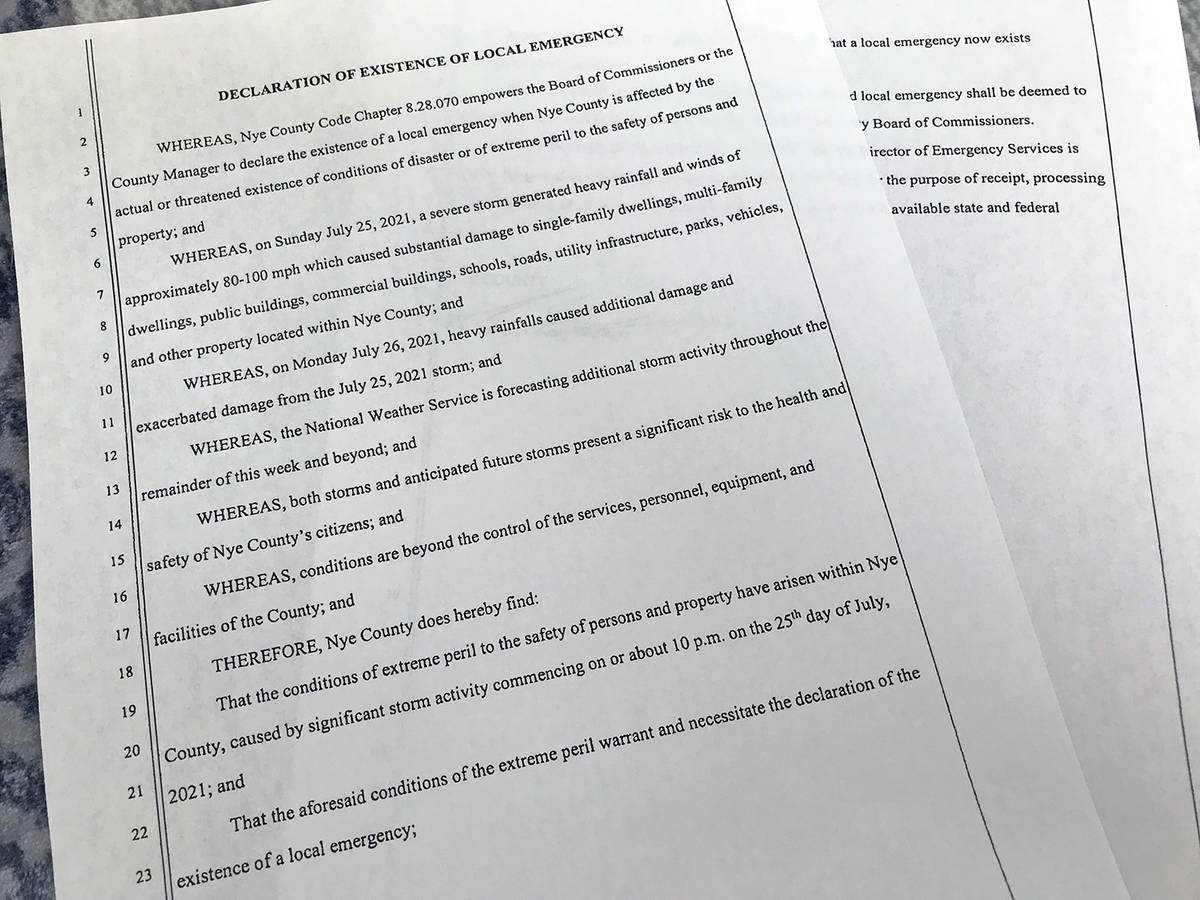 Robin Hebrock/Pahrump Valley Times The emergency declaration issued following the late-July storms that caused extensive damage across Pahrump has been ratified by the Nye County Commission. 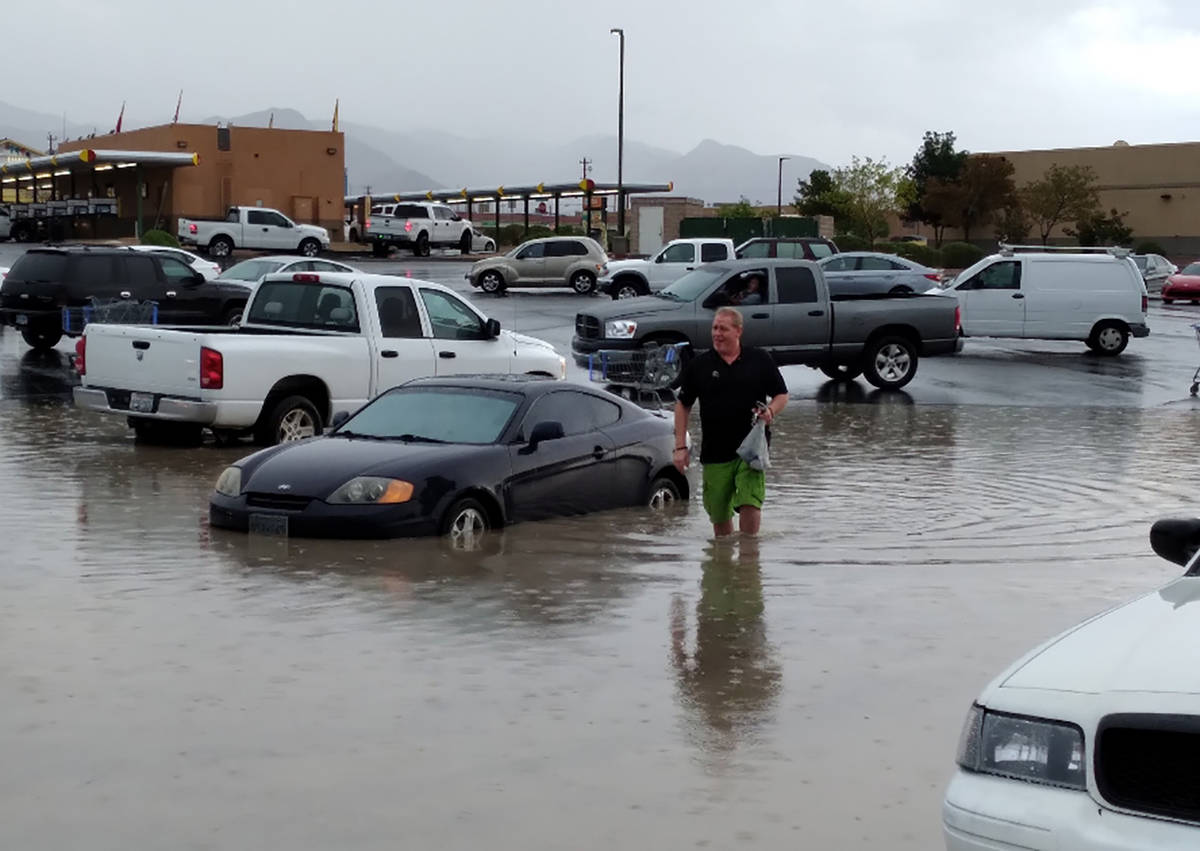 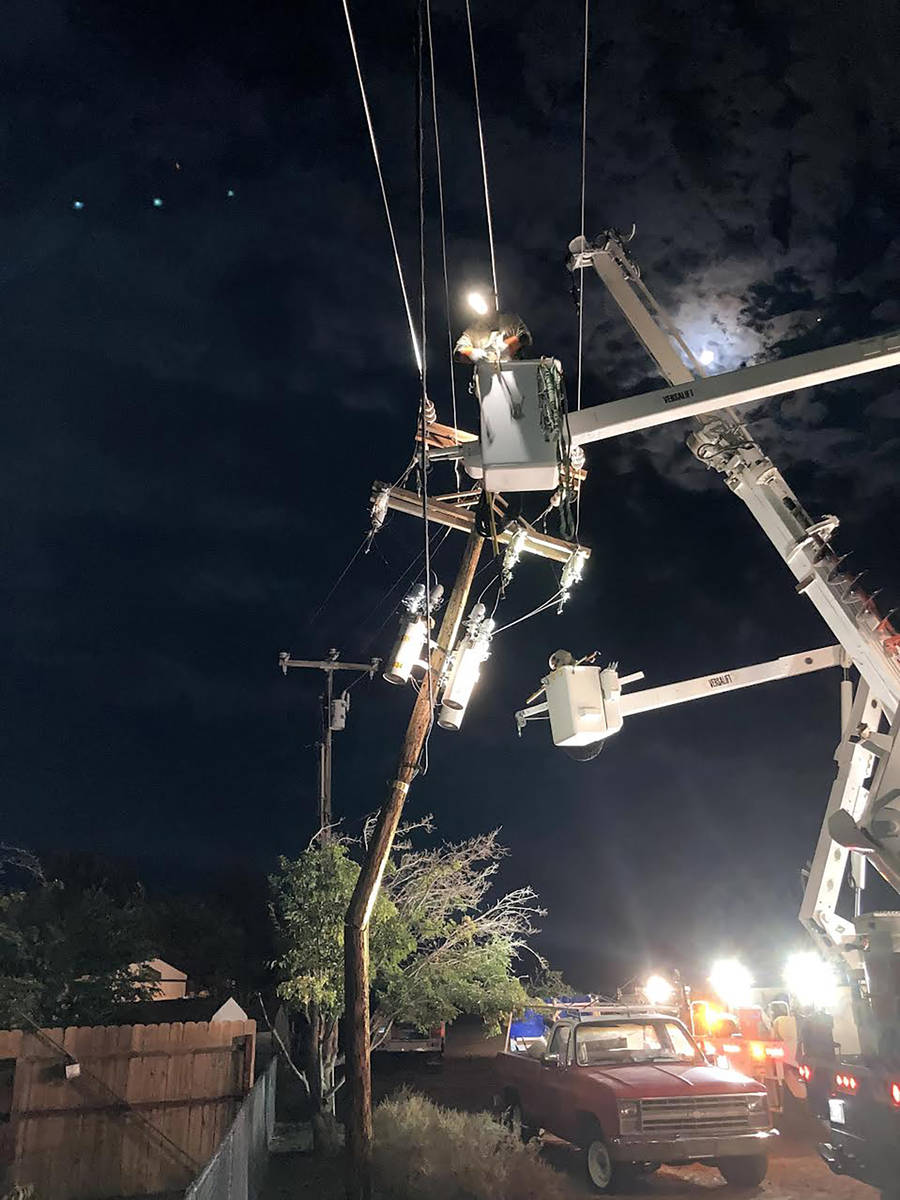 Special to the Pahrump Valley Times This photo provided by Valley Electric Association shows a broken power pole, one of many that were in need of repair following July's two intense storms.

On July 25 and 26, the town of Pahrump was hit by two major storms that brought hurricane-force winds and dropped roughly 2.5 inches of rainfall, nearly the entire amount the town sees in a full year, which caused both wind damage and immense flooding throughout the valley and resulted in the almost immediate issuance of a declaration of emergency by Nye County Manager Tim Sutton.

Now, that declaration has been ratified by Nye County commissioners, who gave their unanimous approval to the declaration during the board’s Tuesday, Aug. 17 meeting, a move which is hoped to open the door to funding assistance for storm recovery from both the state and the federal government.

The Declaration of Existence of Local Emergency outlines what was experienced during the two days of storm activity, noting that heavy rainfall and winds of up to 80-100 miles per hour had resulted in substantial damage to homes, commercial properties and buildings, schools, roads, utility infrastructure, parks, vehicles and other property.

Photos and videos of the aftermath of the storm, which were provided to the Pahrump Valley Times and posted on social media feeds, evidenced this damage. There were images of trees that had toppled over, some of which fell onto homes and automobiles, broken windows in both homes and vehicles, torn up fences and downed power lines, as well as washed-out roads, driveways and culverts, and deep floodwaters that in some instances took several days to drain away. Many residents and business owners had floodwaters not only on their properties but inside their buildings as well. County buildings were closed following the storms due to the damage sustained at multiple offices and the fallout from the storms is still being addressed by the Nye County Public Works department.

“Whereas, conditions are beyond the control of the services, personnel, equipment and facilities of the county… Therefore, Nye County does hereby find: That the conditions of extreme peril to the safety of persons and property have arisen within Nye County, caused by significant storm activity commencing on or about 10 p.m. on the 25th day of July, 2021, and that the aforesaid conditions of extreme peril warrant and necessitate the declaration of the existence of a local emergency. Now therefore, it is hereby declared that a local emergency now exists,” the declaration reads, concluding, “It is further declared and ordered that the direction of emergency services is hereby designated as the authorized representative of Nye County for the purpose of receipt, processing and coordination of all inquiries and requirements necessary to obtain available state and federal assistance.”

Nye County Commission Chair Debra Strickland opened the discussion that afternoon by asking Sutton if the declaration of emergency would allow for local homeowners to receive reimbursements for the costs of repairs to local homes impacted by the storms, but Sutton explained that this was not likely.

“The expectation is that everybody have insurance to cover it,” Sutton said, with Strickland adding, “Even if you’re not in a flood zone.” Sutton said that was correct and stated that the funding the county would be going after was primarily for repairing roads and other infrastructure.

“But we are looking, we have received those requests (from homeowners) and we’re trying to see if there is any way we can squeeze more money out…” Sutton informed the board.

Commissioner Leo Blundo then expressed his gratitude to Sutton for acting quickly, stating, “It’s a real challenge. I have gotten, and I am sure my colleagues have gotten similar emails and phone calls. I have a handful of constituents in district 4 who are deeply affected by this natural disaster. I thank you for bringing this forward and making the declaration… It’s critical that we address these concerns and open avenues for homeowners, commercial, residential, renters, for everybody. We need to open avenues for them to be able to get assistance and remediation for the rainwater and as you can see, it’s not just those in flood zones who were affected. Those who are not in flood zones were also affected as well.”

As for Nye County Commissioner Frank Carbone, his main concern was with the Bureau of Land Management, an entity with which is he was obviously frustrated. As a commissioner who not only sits on the board now but has served in the past as well, he has knowledge of the county’s previous attempts to request collaboration with the BLM on stormwater retention and diversion projects, attempts that have all proven unsuccessful.

Much of the stormwater that pummeled the town of Pahrump in the recent storms came down the Spring Mountains and flowed down what is know as the “fan”, which is the area of land around the base of those mountains. This area is largely BLM land and without cooperation from that entity, the county has not been able to undertake projects that could help prevent flooding events such as the one seen in late July. As a result, Carbone said the county should look into filing a lawsuit against the BLM to force their hand.

“I still think we need to pursue a suit with the BLM because we are not getting any help from them so we can start diverting some of this water into the right places,” Carbone asserted, adding, “If we don’t get any answers from them, we might just be disobedient and start doing something in order to save our county and town.”

Strickland, who has a background in construction, chuckled and replied, “I know where all the loaders are parked and I know how to operate them too!” She noted that it wouldn’t be the first time that the county has had a conflict with the BLM, either, remarking on the time in the 1990s that former Nye County Commissioner Dick Carver took a stand against the BLM over local lands issues. “Don’t tempt us!” Strickland stated.

However, she said the county has a new BLM Pahrump Field Office manager, Nick Pay, and she would like to see if that would make any difference to the situation. She directed staff to reach out to Pay to see if he would be willing to assist the county with obtaining approval for a detention basin to manage stormwater runoff.

Blundo made the motion to ratify the declaration of emergency, with a second from Carbone. That motion passed passed with all in favor.