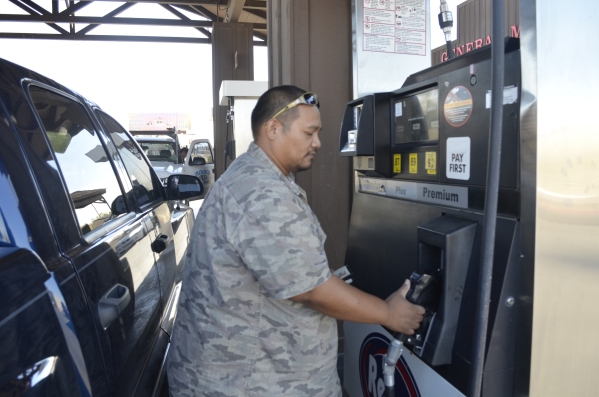 Pahrump residents may soon have to shell out more money at the gas pump, as officials mull a countywide increase to the motor vehicle fuel tax rate.

On Tuesday, Nye County commissioners will hold a public hearing that will determine the fate of a proposed 5-cent increase that could take a motor vehicle fuel tax to a maximum of 9 cents.

“The funds can only be spent on material for projects,” said Commissioner Dan Schinhofen. “No salaries or equipment can be bought with it. This will give us the best chance to try to catch up with the deterioration of our roads.”

While the current 4-cent rate had been stagnant for over 30 years, Schinhofen said for years he had been trying to find funds to improve roads across Nye County.

The hike had been discussed at previous Regional Transportation Committee meetings. Nye County commissioners also voted 5-0 to draft an ordinance to increase the fuel tax by at least three cents and as much as five cents at the Aug. 4 meeting.

Pahrump residents, however, were divided on the issue ahead of the hearing, as gas prices continue to average $2.30 around town.

Matt Martin, who pulled into the Rebel gas station along Highway 160 on a Thursday afternoon, said it was everybody’s responsibility to pay for maintenance of the roads.

“I’m for it. You know, everybody who uses the streets, we should put out our fair share of what we use. We drive on the streets every day, so I think taxes should come off from (motorists). This is our responsibility to (pay for it).”

Another Pahrump resident, Ali Derr, said she was against the hike.

“It sucks that it goes up that much (but) you can’t really go without gas,” she said.

Officials stated earlier that the lack of money is delaying some of the projects that have been placed on hold. In the meantime, the Nye County motor fuel tax remains one of the lowest in the state after it was raised in 1985.

Road Superintendent Tim Carlo said a 7-cent hike that had already been approved by the Regional Transportation Commission was projected to generate roughly $1.4 million a year. The Nye County Public Works Department was hoping to utilize the potential revenue “in broad work,” he said.

Nye County commission Chairperson Lorinda Wichman said while the gas tax hasn’t been raised in 30 years, the cost of road maintenance has gone up.

“We have an awful lot of people who are complaining about conditions of the roads. And if you want the roads (to be) fixed, you’ve got to pay for it.”

Wichman said she received feedback from numerous Pahrump residents who were in favor of the increase.

“Everybody who called me were for it, only one email was against it,” she said.