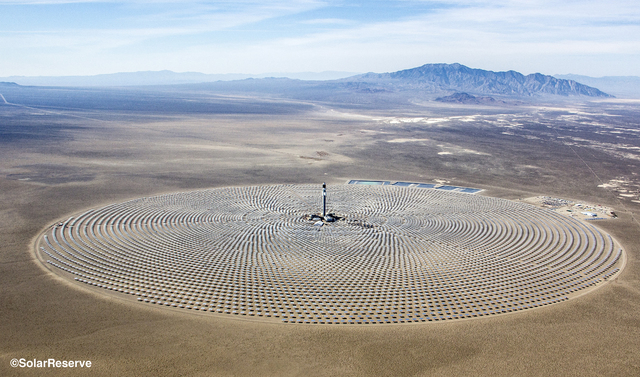 Special to the Pahrump Valley Times Nye County officials said they officially support SolarReserve's activities in the county. At the Sept. 19 meeting, Nye County commissioners passed a resolution stating that, “the Board of Nye County Commissioners recommits its firm support of SolarReserve and looks forward to the opportunity to continue to contribute to their future success.”

Nye officials got behind SolarReserve and its activities in the county.

At the Sept. 19 meeting, Nye County commissioners adopted a resolution stating that “the Board of Nye County Commissioners recommits its firm support of SolarReserve and looks forward to the opportunity to continue to contribute to their future success.”

Nye County Commissioner Lorinda Wichman said she offered a resolution “with the intent to memorialize the support” for SolarReserve, a Santa Monica, California-based company that currently operates the 110-megawatt Crescent Dunes Solar Energy Plant near Tonopah and recently disclosed plans for another project in the county.

“There is much more support for their efforts in Northern Nye than opposition. We are proud to have the opportunity to work with such a leader in the field of renewable energy and innovative technology,” Wichman said.

Mary Grikas, spokeswoman for SolarReserve, said the company is “honored” and “greatly appreciates” the ongoing support of Nye County.

“We look forward to continuing to bring jobs, commerce and tax revenue to the county,” Grikas said.

The county adopted the resolution about a week prior to the Pahrump Valley Times reporting that a Las Vegas law firm is launching an investigation into allegations of employees’ gas exposure at the Crescent Dunes Solar Energy Project.

Craig Drummond, an attorney from Drummond Law Firm in Las Vegas, said he is in the early stages of the investigation into employees’ potential exposure to nitrogen dioxide gas from a hot salt tank at the solar plant near Tonopah.

Drummond was hired by Timothy Stiver, a former mechanical supervisor at Cobra, a Madrid, Spain-based contractor for Crescent Dunes Solar Energy Project. Stiver alleged that he and a group of other workers were hospitalized after inhaling the gas emitted from the hot salt tank.

SolarReserve’s projects are often looked upon by local officials as the kind of economic engine that Nye County badly needs.

The resolution adopted by the commission said that SolarReserve’s “outstanding success” has made the company the highest taxpayer in Nye County and has brought visitors to Tonopah from around the world.

The resolution was passed shortly after SolarReserve announced a plan for the Sandstone Project, that would bring up to 10 solar thermal towers for 1,600 megawatts on approximately 20,000 acres of public land near Tonopah.

The plans were met with excitement by Nye County officials and some Nye County residents who said they were hoping the project would bolster Tonopah’s economy.

At the Sept. 5, Nye County Commission meeting in Tonopah, SolarReserve CEO Kevin Smith and SolarReserve Director of development Adam Green made a public presentation about their plans to bring a large-scale project to the remote Nevada desert.