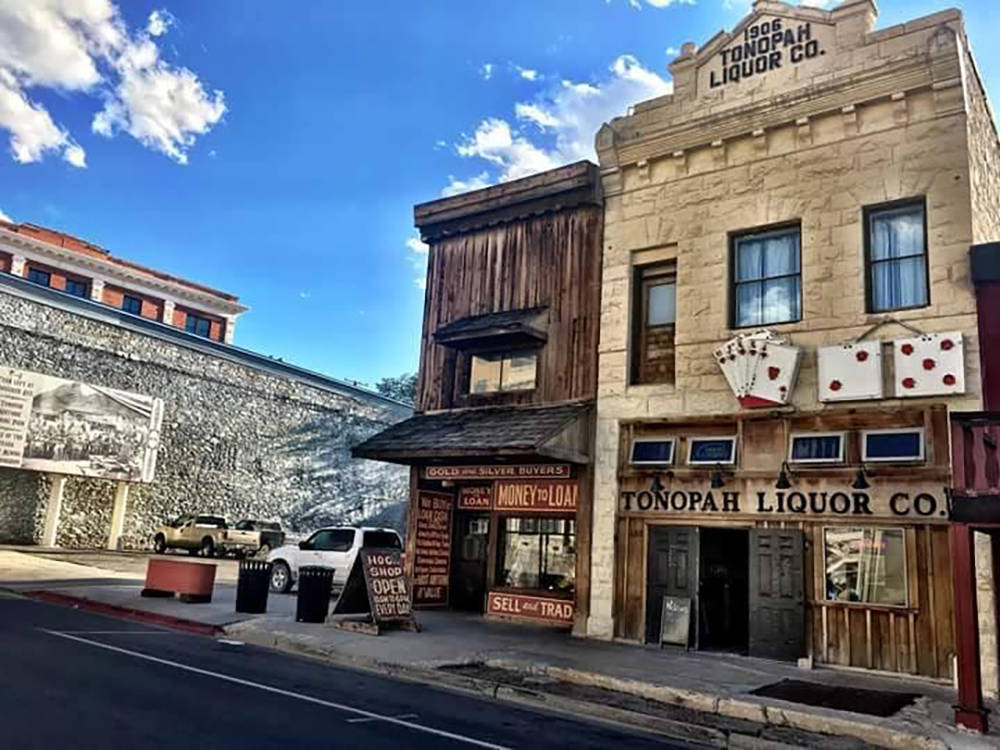 Special to the Pahrump Valley Times Bars in all areas of Nye County outside of Pahrump are permitted to reopen once more, regardless of whether or not they serve food, following approval of the county's action plan last week. 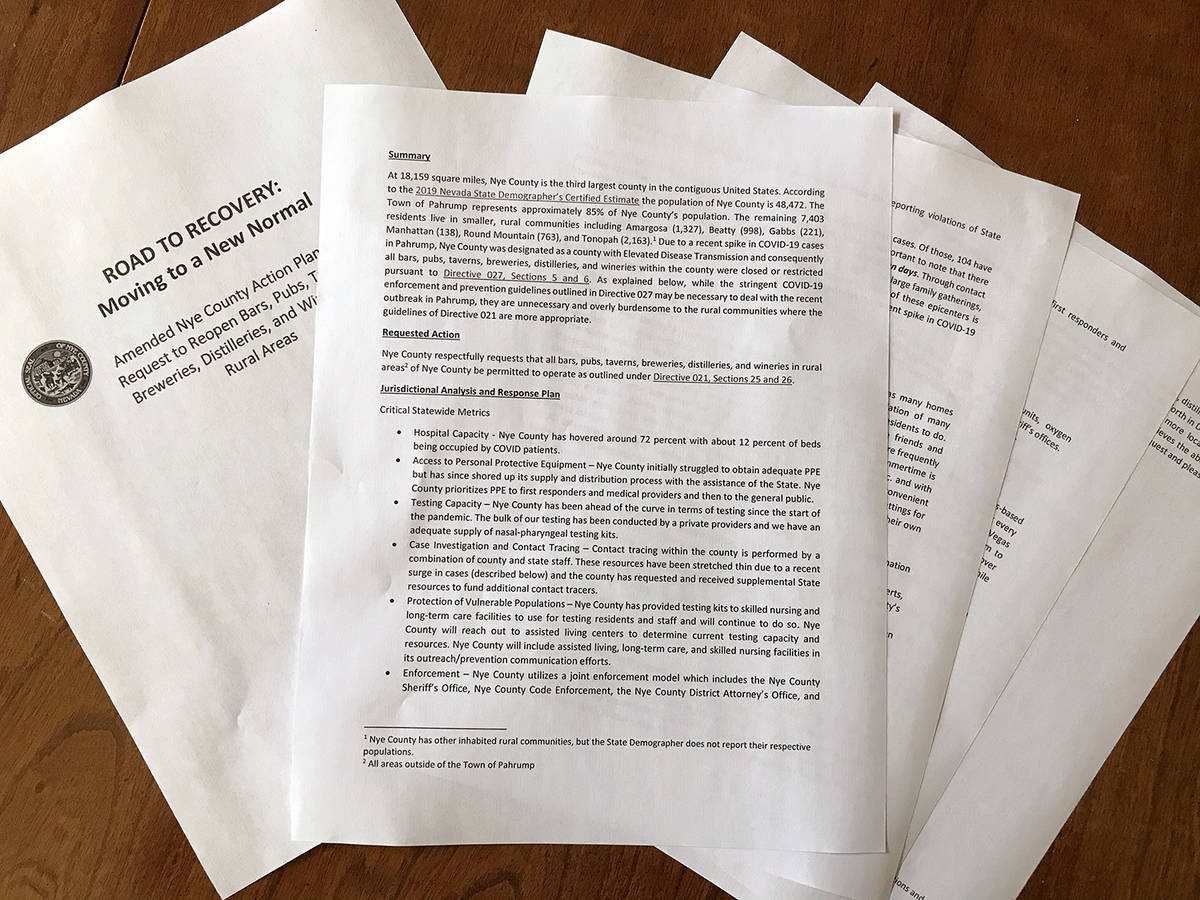 Robin Hebrock/Pahrump Valley Times Pictured is Nye County's Action Plan and request to reopen bars in all parts of the county outside of Pahrump, which was approved by the state on Aug. 20. 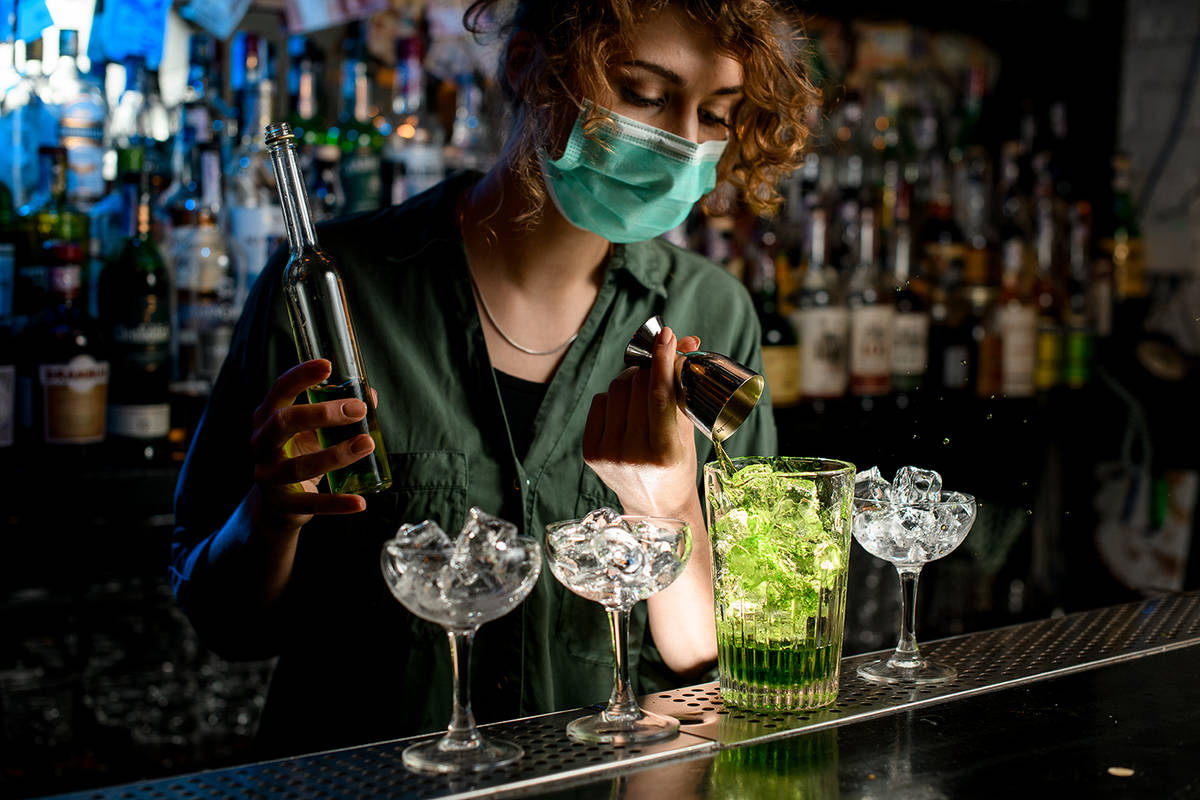 Getty Images All bars in Nye County, except for those in Pahrump, are now allowed to resume drink-only service following a month and a half of restrictions which stipulated that bars were only permitted to remain open if they served food.

“Nye County is happy to announce that the county’s request to reopen bars, pubs, taverns, breweries, distilleries, and wineries in rural areas of the county (everywhere but Pahrump) was unanimously approved by the state’s COVID-19 Mitigation and Management Task Force pursuant to the attached action plan.”

It was an announcement sent out by Nye County Public Information Officer Arnold Knightly in the late afternoon on Thursday, Aug. 20 and one greeted with sighs of relief and expressions of satisfaction from many Nye County officials.

The state’s COVID-19 task force had mandated that bars in six Nevada counties, including Nye County, that do not provide food service shut their doors in mid-July after the state identified those six counties as having an elevated risk of transmission of the COVID-19 virus. Ever since that mandate, Nye County Commission Chairman John Koenig, who is part of the county’s COVID-19 task force, has been striving to get the state to allow Nye County to address its more rural areas differently than it does the town of Pahrump, where a vast majority of the county’s population resides, but it hasn’t been easy. Koenig said he’s been frustrated since the order to close bars was issued roughly a month and a half ago but finally, after repeatedly requesting authority to allow Nye County bars outside of the Pahrump Valley to reopen, the state acquiesced to that request.

“My idea with the state was, they should treat Nye County, because of its size, exactly they way they’re treating the state of Nevada,” Koenig told the Pahrump Valley Times.

Nevada is approximately 110,500 square miles in size and Nye County, which encompasses almost 18,200 square miles and is the largest county in Nevada as well as the third largest county in the contiguous United States, makes up nearly 17 percent of the state’s total land area. “I said, Nye County is so big that it takes me six hours to get from Pahrump to Gabbs. So what’s the difference? No one is going to drive six hours to Gabbs to have a beer, or three hours to Tonopah to have a beer,” Koenig asserted. “And we’re having almost no cases in the outlying towns. Pahrump is the big contributor to all of our cases.”

As of the morning of Tuesday, Aug. 25, Nye County was reporting 463 total reported positives, of which 416 were among Pahrump residents. In the past seven days, there have only been two new reported cases of COVID-19 in areas outside of Pahrump, with one new positive in Amargosa and another in Smoky Valley. In contrast, Pahrump has seen 20 new positives reported in the last seven days.

“So why not let me open up the outlying towns, and we’ll watch both Pahrump and the other towns and if we see a resurgence in an outlying town, we’ll shut it down,” Koenig explained. “And the state liked that. They finally agreed to that and so we have been able to open up the bars in those other communities.”

According to the approved action plan for Nye County, ongoing efforts related to testing, contact tracing, enforcement and outbreak intervention is to continue, as will the closure of Pahrump bars that do not serve food. “The task force approved Nye’s proposal, which allows bars to reopen in the areas of the county outside of Pahrump. Additionally, the approved plan includes enforcement mechanisms that would allow county officials to reclose bars outside of Pahrump if cases increase,” a news release from Nevada Health Response stated.

Nye County Commissioner Leo Blundo, who has been against the closure of any and all businesses since the beginning of the COVID-19 crisis in Nevada, was pleased with the decision of the state task force as well. He sent out a statement on Aug. 20 to express his thoughts on the matter. “I fully support reopening our businesses. Every business is essential to a person and their family. That’s how small business owners pay the bills, put food on the table, and keep a roof over a family’s head. This is a step in the right direction (reopening) for Nye County and Nevada,” Blundo wrote.

“It’s been very frustrating but it’s part of the job,” Koenig said in conclusion. “I’ve been working on it for a while now. It just wasn’t fair to the outlying communities. And, it gives me a reason to tell people in Pahrump to get their act together, so the bars here can reopen too. We are still seeing new cases pop up every day in Pahrump because we aren’t doing what we should be doing.”

The reopening of Nye County’s rural bars was effective as of 11:59 p.m. on Aug. 20. The approved action plan will continue for at least two weeks, after which time the state task force may re-evaluate the situation.

To view the county’s COVID-19 action plan submitted to the state on Aug. 19 visit www.nyecounty.net and click on the “Reopening Nevada and Nye Guidance” link at the top of the page.