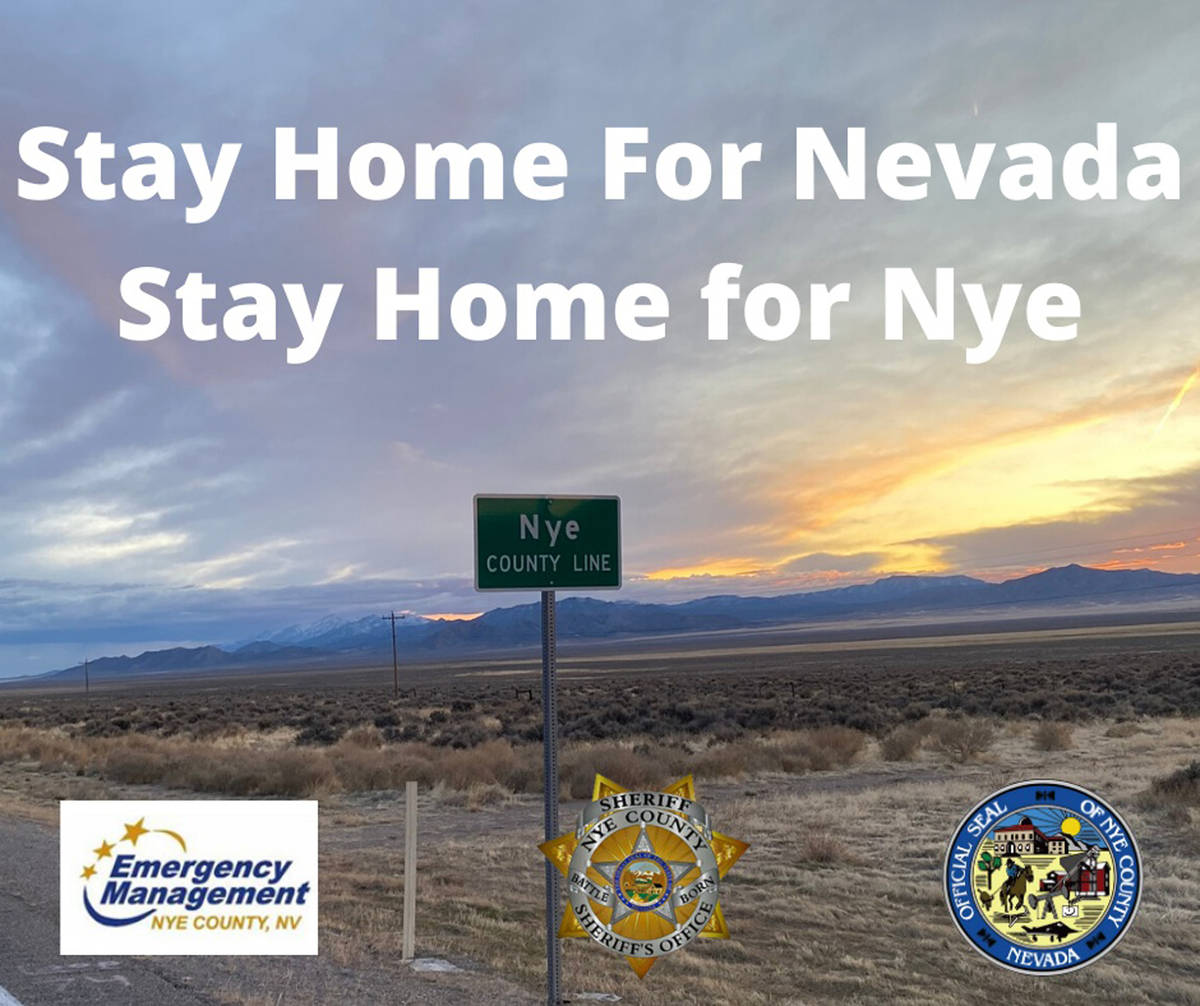 Special to the Pahrump Valley Times Nye County is asking all residents to "Stay Home for Nevada, Stay Home For Nye" in an effort to slow the spread of the novel coronavirus COVID-19. 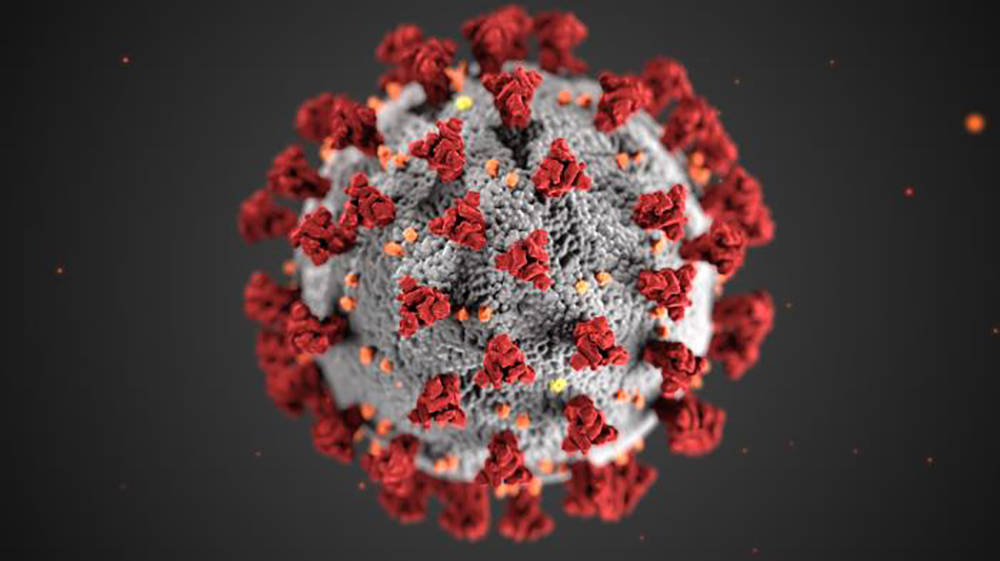 Special to the Pahrump Valley Times Created and provided by the U.S. Centers for Disease Control, this illustration reveals ultrastructural morphology exhibited by coronaviruses. Note the spikes that adorn the outer surface of the virus, which impart the look of a corona surrounding the virion, when viewed electron microscopically.

During a special teleconference meeting of the Nye County Commission on Friday, April 3, the first held by that body since the new coronavirus struck the county, Nye County Emergency Management Director Scott Lewis kicked things off with an overview of the county’s COVID-19 response and the task force that has been assembled to lead that response.

Lewis said it’s very important for everyone to understand that though the county has embraced the social distancing message, it is still operating and plans are in place to handle a variety of possibilities that could arise as a result of the COVID-19 outbreak.

“As a snapshot, just before this meeting began, we were notified by our health officer that there is one additional confirmation… So as we speak, there are currently five active cases for Pahrump. There are zero deaths that we are aware of,” Lewis told commissioners on April 3, noting that total number of cases in Nye was seven.

The number of cases in Pahrump had increased as of Monday, April 6 with two new positives recorded, bringing the total number of positive tests in the valley to seven and the total countywide to nine. On Tuesday, April 7 another new case was reported, this time in Tonopah, bringing the county count to 10. Two of the 10 have been listed as recovered by the state, and there are still no reported COVID-19 deaths in Nye County.

According to county’s COVID-19 information website, approximately 300 tests had been conducted as of Tuesday, April 7, of which 10 resulted in positives.

Lewis said the county’s Emergency Operations Center is open under a partial status, which is manned and monitored 8 a.m. to 6 p.m. every day of the week. With the need to keep staff distanced from one another, the operations center has only a small crew in one location, with the remainder of coordination conducted through telecommunications.

On preparedness, continuity of operation plans have been identified for each department within the county, as well as a multi-tier staff model for key positions. “So if in the event that maybe one of us gets sick, there is someone who is immediately recognized and can step up and they are aware of the plan and its objectives,” Lewis reported.

He added that the local supply and resource chains are in effect, with supplies coming from numerous stockpiles, both federal and state, as well as from Nye County stockpiles and even private entities. The supplies include gloves, N95 masks, gowns, eye protection, tie-back suits, sheets and surgical masks.

“All of these supplies are being distributed to all of our emergency responders throughout the county, including fire, EMS and the sheriff’s office. We’ve also made PPE available to other Nye County agencies such as the public administrator, the sheriff’s auxiliary, the detention center and buildings and grounds,” Lewis stated.

Communication is also considered a necessary part of supplies and in the event of an infrastructure failure or loss, satellite phones and other Amateur Radio Emergency Service and Radio Amateur Civil Emergency Service groups can be used to keep communications lines up and open.

The county is also poised to deal with a sudden sharp rise in the number of COVID-19 patients, though at this time Lewis said he does not expect to see that occur.

“We’ve identified existing county facilities that can also serve as surge protection for medical-related issues. What that means is, if we were to have a significant influx of patients coming into local facilities, we have the ability to manage some of those off site and give them the same level of medical protection,” Lewis detailed. “The surge protection includes treatment isolation, EMS cots, treatment beds, medical support systems, oxygen, X-rays, et cetera. The possibility of additional temporary structures includes M.A.S.H-style tents, triage temporary structures, mobile command posts and mobile mortuaries. They are all part of our ongoing plans and we have contingencies in place to cover each and every one of those.”

Lewis explained that using local residences for self-quarantine is imperative and hospitalization should be utilized as a last resort. Strategic plans have been created to account for mass fatalities too, should that prove necessary.

Food supplies have been at the forefront of the minds of the entire community and this is another aspect that the county is focusing on. Lewis said a food supply liaison group has been meeting to help manage food distribution, with special consideration for seniors and special needs residents. Information regarding local food supplies is now being posted to Nye County Sheriff’s Office Facebook page daily, Lewis said, allowing residents to see what food, paper products and cleaning items might be available to purchase before heading out to the store, a program with which he said the local grocery outlets are cooperating fully.

Other liaison groups have been established as well, which include Valley Electric, local water and sewer utilities, sanitation providers, Nevada Assemblyman Greg Hafen II and of course, Nye County officials.

“We understand there are rumors and a lot of opinions out there but we are working so hard to make sure everything is fact-based on our responses and our messaging and that is what we’re taking great pride in, making sure the most accurate, detailed information is available to our commissioners and our citizens,” Lewis stated.

Electronic display boards, both mobile and fixed, are being harnessed to get out the county’s message of “Stay Home for Nevada, Stay Home for Nye, stay informed through nyecounty.net”. Radio, print, social media and television are being made use of and Lewis said it appears that there has been an improvement, with less people on the roads, in the parks and congregating in various locations.

The county is following the same lines of messaging as provided by the CDC, which includes maintaining at least six feet of distance between individuals, hand washing and sanitizing, avoiding touching the face, covering the face when coughing or sneezing, cleaning and disinfecting commonly touched objects and surfaces and staying home when feeling sick.

The CDC has now altered its guidelines to include a recommendation that citizens wear cloth face coverings in public settings where a six-foot buffer between people is not always possible, such as while grocery shopping.

This directly conflicts with advice health experts were issuing earlier in the year, when they insisted repeatedly that wearing masks was not necessary for those who were not ill. New evidence has come to light, however, that shows many people are “asymptomatic” meaning they have COVID-19 on board but they are not showing symptoms.

The act of asymptomatic people coughing, sneezing and even speaking can spread the virus to others so the CDC is now telling Americans to cover their faces. The CDC does not recommend people wear medical grade masks such as N95 respirators, though, as those are critical for health care workers and other medical first responders. Any simple cloth face covering will do, the CDC website states.