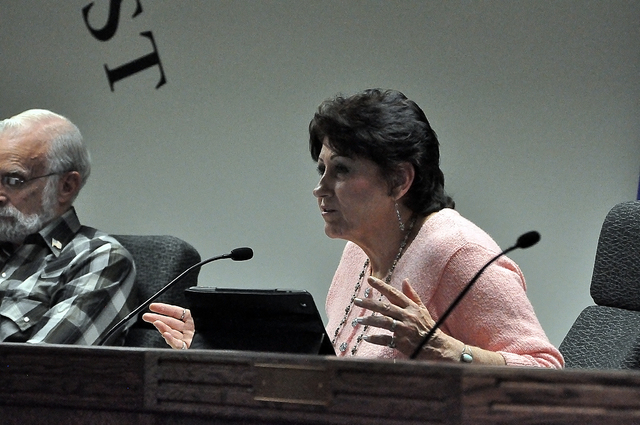 Horace Langford Jr. / Pahrump Valley Times Commissioner Donna Cox was the sole vote against the Nye County Management Employee Association agreement, which was approved by the commission with a 3-1 vote.

Since 2010, the Nye County Management Employee Association has been inoperable with a collective bargaining agreement that was expired.

Now, despite the reservations of at least two Nye County commissioners, the commission has resurrected the agreement and the managerial and supervisory county employees are on their way to once again have a functioning union.

Nye County Human Resources Director Danelle Shamrell brought the item before the commission this month. The collective bargaining unit was essentially requesting to be re-recognized as a union with the renewal of the expired agreement.

“This is an agreement that was initially brought before …” Shamrell told the commission. “The board approved it at the time but the association had board issues as to who was in charge so it never went anywhere and has been sitting stagnant for a while. It’s basically a resurrection of that same agreement.”

Nye County Comptroller Savannah Rucker was on hand as well, to detail the costs associated with the agreement. “The general fund cost is $1,227,635. All other funds, the cost is $655,170,” Rucker stated, bringing the total cost for fiscal year 2019 for the collective bargaining agreement to just over $1.8 million.

Nye County Commissioner Lorinda Wichman questioned whether that amount was in addition to previously budgeted amounts. Rucker stated that was not the case and the agreement did not represent an increase in any budget allotments.

“This is the same cost it would have been,” commission chairman John Koenig agreed.

There were several changes made to the agreement versus its original version, which were denoted in the information provided on the item. One such amendment was the insertion of language limiting pay increases.

“On article 26, one thing I really like here is ‘There shall be no COLA cost of living or across-the-board wage increases during the term of this contract.’ That says what is says, right?” Nye County Commissioner Dan Schinhofen asked. Shamrell confirmed that was correct, with the agreement set to have an expiration date of June 30, 2019.

Other changes included the addition of a section on grievance procedures and arbitration, as well as a structure for the order in which layoff would occur and language adjustments throughout.

Nye County Commissioner Donna Cox, who has spoken against unions in the past, once again expressed concern with authorizing yet another bargaining agreement for county employees.

“What is the reasoning behind this and the advantage to anyone, the public, staff, management? Why all of a sudden are we making these changes and is it going to make things more cost-effective or should we just leave things alone?” Cox questioned.

Shamrell replied that the union had requested to be recognized, with Nye County Manager Tim Sutton noting it had the right to do so. As the union’s agreement had expired in 2010, Shamrell said the county needed to approve an agreement to make it current.

Cox was obviously not convinced. “We’ve been seven years without it and everything seems to be running smoothly,” she said, repeating that she was leery about the proposal.

Schinhofen said he himself did not like the idea of unions either but he felt the agreement was the best the county had going forward. He made a motion to adopt, which was seconded byWichman. The motion passed 3-1 with Cox against and commissioner Butch Borasky absent.

The agreement can be viewed by visiting www.nyecounty.net and selecting the Nye County Commission’s Feb. 6 meeting agenda.