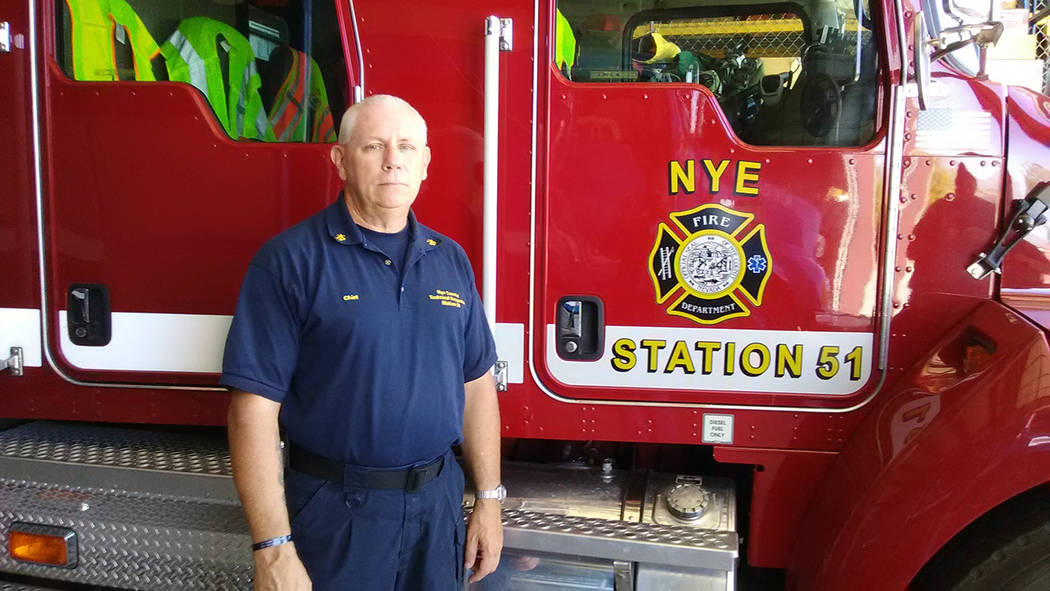 Selwyn Harris/Pahrump Valley Times Nye County Technical Response Division Chief Rich Flanagan is seeking volunteer firefighters at Station 51. Candidates must be at least 18 years of age with a high school diploma. A drug screen is also part of the process. All the training offered for the positions are free. Station 51 is located at 1510 Siri Lane near the courthouse. 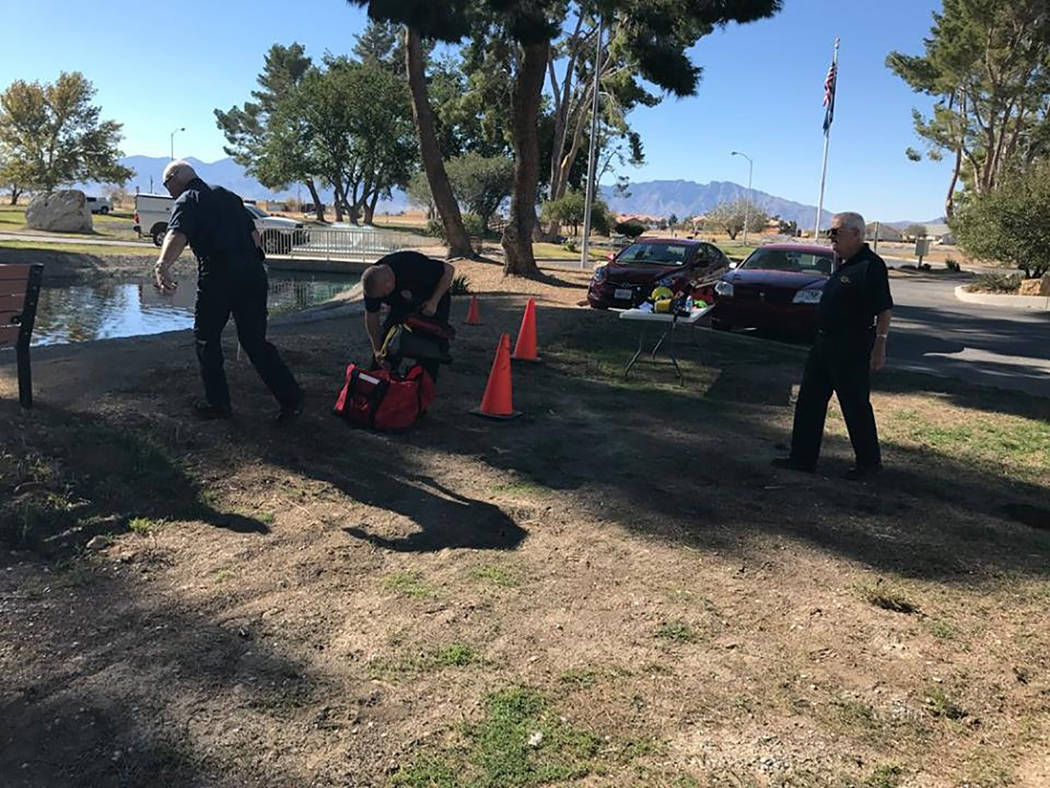 Special to the Pahrump Valley Times Members of Nye County Technical Response prepare for a water rescue training drill at the Calvada Eye. Volunteer firefighter classes begin in January, as the need for additional crew members is growing. 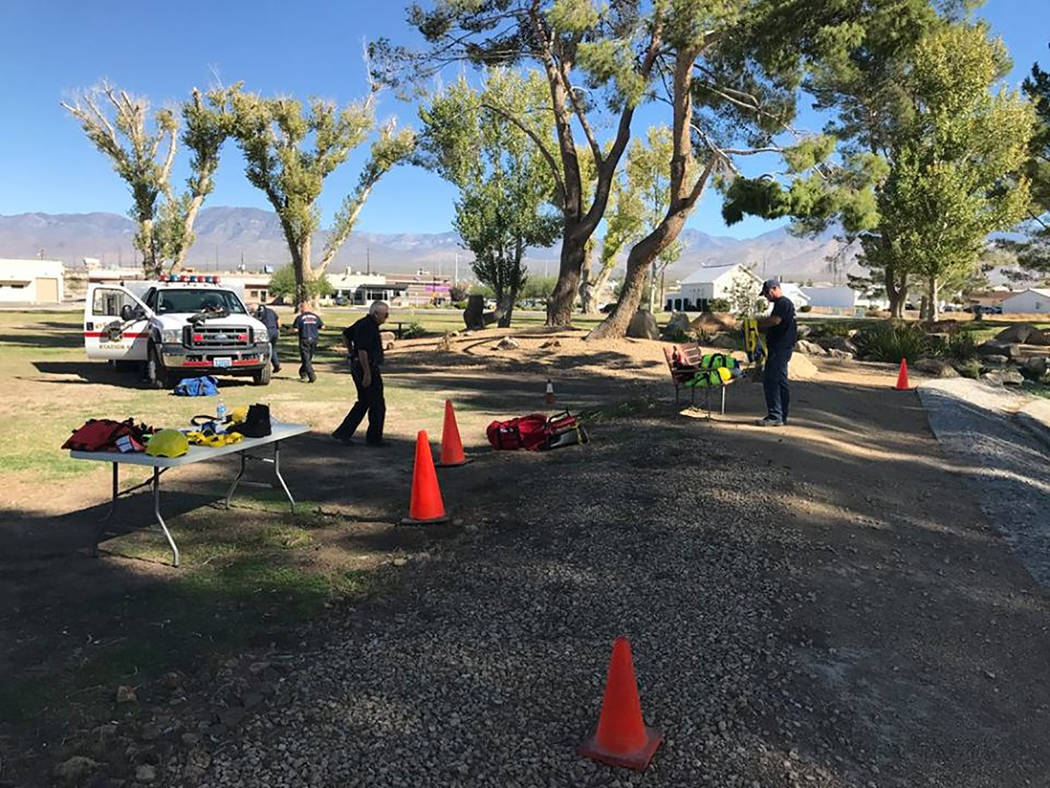 Special to the Pahrump Valley Times Structure and wildland firefighting, along with Hazmat responses and water rescues are part of the training volunteers will receive with Nye County Technical Response beginning in January. The agency is looking to enhance its 12 member volunteer corps. 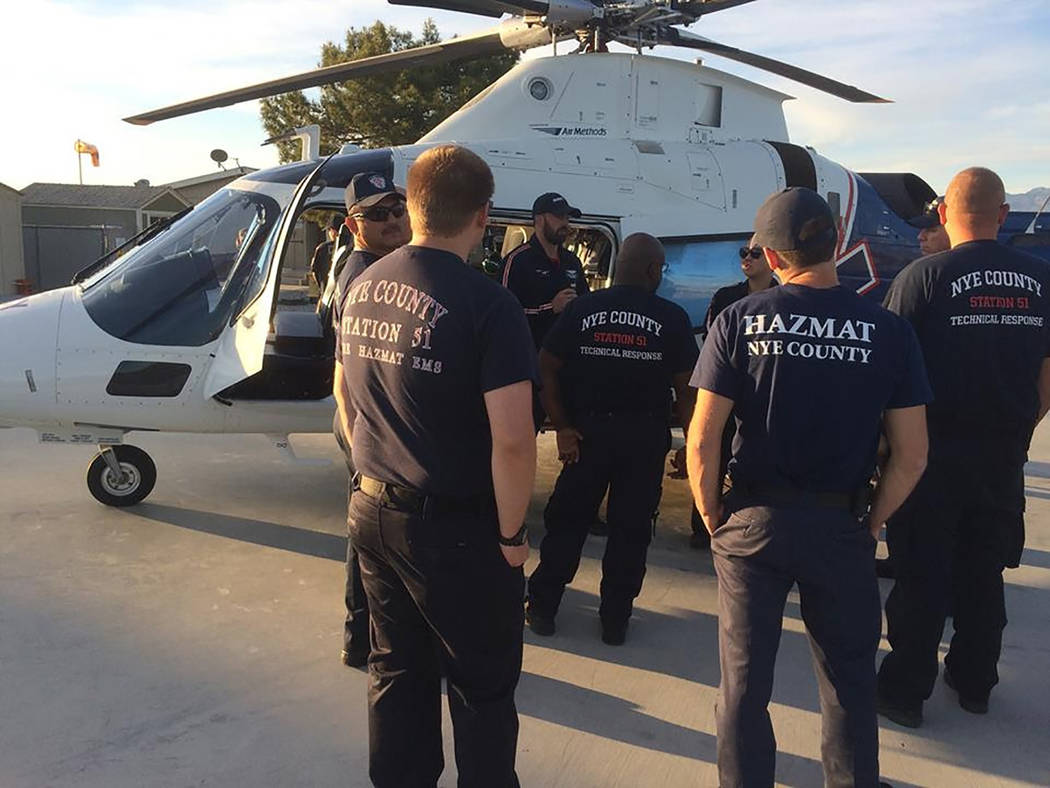 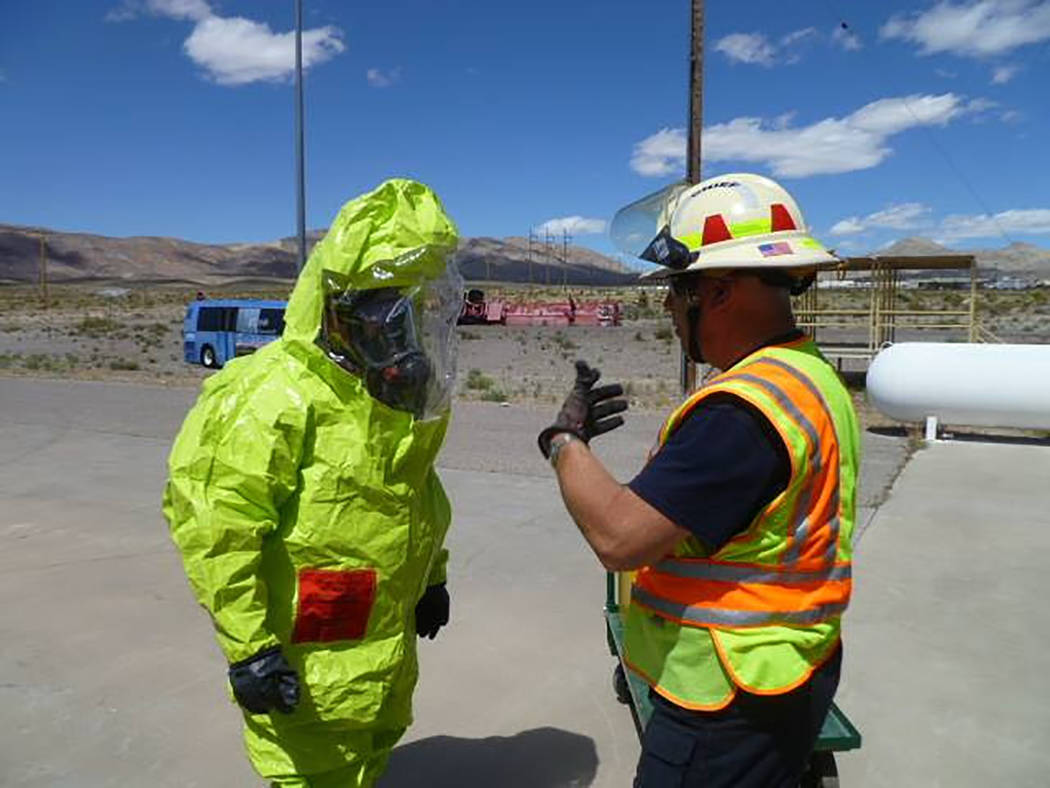 It’s an opportunity to learn the skills necessary to become a bona fide first responder in Pahrump and Nye County, as the need for volunteer firefighters at Nye County Technical Response Station 51 is urgent.

Division Chief Rich Flanagan said he’s reaching out to the community to seek qualified candidates, both male and female, who are interested in the field of firefighting.

“Currently, our station has 12 volunteers, but in order for us to effectively operate it, we need quite a few more volunteers,” he said. “All of the training that we do here is free to the volunteers. We also follow the standards that are put out by the State Fire Marshal’s Office Training Division. We are looking for as many as possible to get involved.”

Flanagan said the prospective candidate must be at least 18 years of age with a high school diploma.

“We have quite a few missions here,” Flanagan said. “We train our volunteers for structure firefighting, Hazmat, and wildland firefighting, which we are starting to build up that program even more. We also have a rescue unit here, which has rope and water rescue equipment on it. Firefighting has two levels of training for Firefighter 1 and Firefighter 2. That enables them to enter a building that is on fire and properly execute a search and attack the fire from the interior. Hazmat volunteers deal with hazardous materials of various kinds.”

Additionally, Flanagan said he’s looking to boost staffing on the rescue side of the training.

“With the rope rescue team, we are looking to get more volunteers now, in order to get that up and running, which is basically surface rescue,” he said. “The water rescue is what we call ‘water’s edge’ rescue because we don’t put anything into the water or anything like that. With the wildland firefighting, if anybody follows the news, they will see all the fires that are going on. Our teams could be tasked to go to any one of those fires.”

Response times are yet another issue Flanagan and his crews are working on to improve, as volunteers are usually summoned from their homes.

“We are going to start staffing the station here and we are doing it four days out of the week,” he said. “Anyone who joins and wants to get certified to the level they can respond to, they can come here and put in a shift. When they’re not on a shift, and at home we issue the volunteers a pager. If they’re at home when the pager goes off and they’re available, they respond here to Station 51 to get whatever equipment they need and we roll from here and head to the scene.”

Flanagan also noted that from time to time, Station 51 responds with crews from Pahrump Valley Fire and Rescue Services for what’s known as “mutual aid” assignments.

“We are mainly a support department,” he said. “We support Chief Scott Lewis when he calls on us. Of course, that depends upon what he requests and what I can send. We have the proper people at the proper level of training. We do go out to Amargosa Valley and support that community and we also have a mutual aid agreement with the Nevada Test Site if they need us for anything. We also do training with them.”

Flanagan stressed that individuals from all walks of life can potentially become volunteer firefighters, including teachers and students.

“At the end of the school year many teachers don’t have much going on during the summer, so we would like to invite them up here and offer all the free training and equipment,” he said. “That also goes for college students enrolled in Great Basin College or those who live here and attend UNLV. They have down time during the summer usually. I could bring them on to help out with our wildland program. I just want to let that group of folks know that something’s out there for them to do. It’s also a great resume and character builder.”

Even though an individual is not interested in firefighting, Flanagan said there are additional functions that volunteers routinely perform.

“There are people who don’t really want to get into the firefighting side of the volunteer program, which I can fully understand,” he said. “But if anybody is interested in Hazmat and has a strong science background dealing with chemicals and just wants to do that, I will definitely bring them on. If there’s people interested in just doing the rope rescue part of the program, that’s fine as well.”

Additionally, Flanagan said volunteers routinely use their training to move on to full-time employment with other fire department agencies as a career.

“Once they reach their firefighting certification, they have all of the prerequisites in line,” he said. “When they complete that class they will get their certification. I have had two volunteers here who were hired by Pahrump Valley Fire and Rescue Services. They went through all the training and got some experience here. Right now I have 29 years invested in fire service. I’m originally from upstate New York, where I started out as a volunteer. That led to a full-time career in firefighting.”

Anyone interested in becoming a volunteer firefighter can stop by Station 51 at 1510 Siri Lane for an application.

Flanagan noted there are a few requirements that must be fulfilled by the candidates.

“Once they fill out an application, the next step is an interview,” he said. “Basically, we tell them what our station is all about and answer any questions they have. If we accept them, they go for a drug screen, and they also need to get a physical to determine whether they are physically fit for firefighting duties. Once they have done that, we move on to issuing gear and getting them into training. This is for men and women. Right now the department has one female but it’s open to both men and women, of course.”