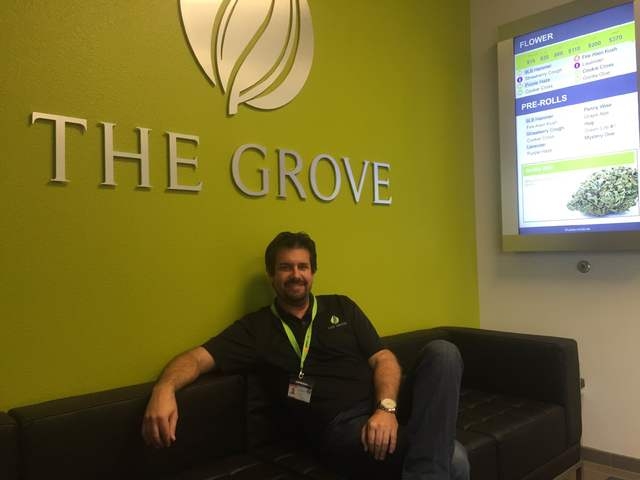 A year-and-a-half after receiving the sole license for a medical marijuana facility in Nye County, The Grove finally opened its doors for business Tuesday morning.

A long time in the making, Demetri Kouretas, CEO of The Grove, explained there were many hoops to jump through to get to this point and get the 2,500-square-foot dispensary, located at 1541 E. Basin Ave., operational.

“Through all of those processes it took quite a few months and we’re finally here and now we’re having our soft opening today.”

One of the last issues that Kouretas and his partners at The Grove faced as they inched closer to opening was having enough product.

With their own strains of marijuana not ready to go just yet, The Grove turned to a nearby cultivation facility to stock their dispensary until their own product is ready to go.

“Actually, the product we have in our store here is from a third party. We opened our doors with Green Life Productions, which is another cultivator here in Nye County,” Kouretas said. “Our personal product we will begin harvesting probably sometime in mid-May.”

The weed strains offered include Purple Haze, Fire Alien Kush and Strawberry Cough among others, and range in price from $15 for a pre-rolled joint, up to $370 for an ounce of medical marijuana.

The inaugural customer to purchase medical marijuana from The Grove is a familiar face to those around Nye County.

County Commissioner Dan Schinhofen, said he bought the 9LB Hammer Strain. It is used for pain and stress-relief and has heavy and long-lasting effects, according to the description.

“I’ve been in chronic pain for over 15 years, I have degenerative disc disease, they test my blood every six months to make sure my liver isn’t failing yet,” Schinhofen said. “My doctor thinks this is a good way for me to get off the prescription pills.

“I’ve been on this stuff forever, and now I can try something that is more natural that’s not going to destroy my liver. That’s why I got a card and I’ve been waiting for this dispensary to open.”

Schinhofen went on to say the marijuana sold at The Grove is not like the variety you buy off the street, as you don’t really know what’s in illegally sold weed.

“It’s purer. When you buy it illegally you never know what you’re getting,” he said. “This tells you how much terpene, THC, GBD, all those things are, depending on what you need.”

Schinhofen said he only uses the medical marijuana at night and hopes once the higher GBD product is released, he hopes to be of prescription drugs all together.

The community has been patiently waiting for the dispensary to open, so much so that some were losing sleep over it.

“I heard it was opening yesterday and… I almost couldn’t sleep,” said a customer who was waiting to be seen by staff in the lobby.

The Grove hired six full-time employees for the facility, filling spots such as budtenders, managers, assistant managers and intake personnel.

Hiring the staff was a bit different than the average job, as the qualifications are for a business that really has no precedent in the state.

“Not a lot of people have the qualifications to work in a dispensary. It’s hard to find employees that have worked in a legal environment,” Kouretas said. “We looked for people that may have had experience in the cannabis business before, that were quick to learn with our business. Communications skills, could work well with patients, that’s what we were looking for.”

Leading up to the opening, The Grove held various educational events at local senior centers and in the parking lot of the business itself, to prepare residents to be ready to buy from day one and to inform them of the medical marijuana business.

“We are going to continue with that (educating the residents), by bringing in some nurses that could speak as well. The plan is to educate the community as much as possible,” Kouretas said.

“We are excited to finally be open for business and we want to take the time necessary to ensure that the product The Grove produces and sells is going to be the best alternative for those who are seeking relief,” Kouretas said. “It matters to us that everything we provide is natural and truly effective.”

The Grove will open its second dispensary in Nevada next month, as their Las Vegas location will open up in mid-April. The first dispensary in Clark County opened in late August.

With Tuesday being their soft opening, there is a grand opening celebration planned for later in the month.

The Grove grand opening celebration will be held on St. Patrick’s Day, March 17, from 11 a.m. to 7 p.m. Patients can get $5 pre-rolls, and $10 off their first purchase when they sign up for The Grove Society.

There will be a DJ on hand to spin tunes and the Karma Holistic Health Foundation will be on site to walk applicants through the process of getting a medical marijuana card. Karma will offer a $50 new patient discount the day of the grand opening. A current photo ID is required to start the application process during the event.

Although some residents might be opposed to the medical marijuana dispensary, Kouretas explained that places like The Grove are an important aspect to many people’s lives in the county.

“We wanted to open this facility so patients had an alternative to over-the-counter medicine,” he said. “To give them a way to ease their pain or whatever medical symptom they may have in an alternative way and educate them and show them cannabis is a safe way for them to do that.”

For more information on The Grove contact them at 775-556-0100, or visit them online at www.TheGroveNV.com. 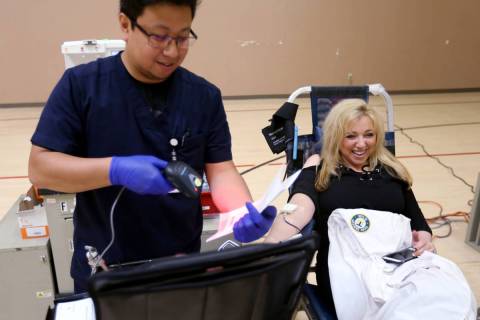