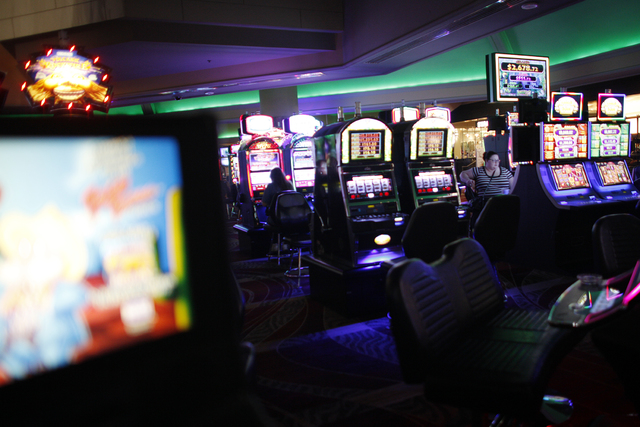 Rachel Aston/Las Vegas Review-Journal Slot machines at the Stratosphere's casino floor on Monday, Jan. 30, 2017, in Las Vegas. In Nye County, gaming wins were positive on an annual basis but dipped slightly for the month, in June.

Nye County gaming wins were positive on an annual basis but dipped slightly for the month in June.

A report last week from the Nevada Gaming Control Board showed gaming wins in Nye County were up by 1.95 percent in June over the previous 12 months—increasing to more than $47.6 million.

Though it registered a loss, Nye County was still in better shape, on a monthly comparison, in June 2017 over June 2016. In June of last year, the county recorded a loss of 1.15 percent over June 2015’s gaming wins.

The June wins were down over the month of May that had over $4.6 million in gaming wins, with June equating to over $3.6 million. In total, that equaled a 22.8 percent decline from May to June.

The gap between May and June wins was similar to 2016’s numbers, when gaming wins in Nye County gaming equated to more than $3.6 million over May 2016’s more than $4.1 million. That split was a nearly 13 percent decline from May to June in 2016.

Even the super-heated downtown Las Vegas market that had been reporting double-digit percentage increases in win over the past year didn’t hit lofty levels, increasing 8.7 percent to $46 million.

The three-month win average — usually a more reliable gauge of performance because it accounts for high and low months resulting from report timing anomalies — showed state win up 1.9 percent for April, May and June. The three-month averages also showed Clark County up 1.8 percent, the Strip up 0.5 percent and downtown soaring 13.2 percent for the period.

The Gaming Control Board also announced 12-month totals on Thursday to mark the end of the 2016-17 fiscal year.

Of the state’s 15 studied markets, only two had win declines for the fiscal year compared with the previous 12 months. North Shore Lake Tahoe was off 2.5 percent to $25.3 million while the Boulder Strip declined 0.5 percent to $793.9 million. The Boulder Strip downturn was attributed to an 8.4 percent decline in table-game win that was somewhat offset by a 0.7 percent increase in slot-machine win.

Table win was off in nine of the 15 markets statewide during the 2016-17 fiscal year, but slot win was up in every market except North Shore Lake Tahoe.