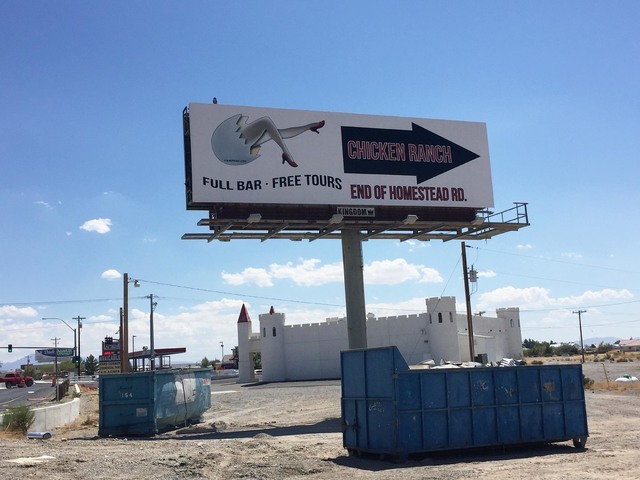 Nye County commissioners could ask the sheriff's office Tuesday to investigate a pair of brothels in Nye County for breaking county code and state law for unlawful advertising of prostitution for using billboards like this one pictured here Thursday at the corner of Highway 160 and Homestead Road. Arnold M. Knightly/Pahrump Valley Times

Changes could be coming to how the county regulates brothels, as licensing fees will increase and regulation of guidelines, that were unclear in some instances, will be more clearly laid out and enforced.

The changes, spearheaded by Nye County Commissioner Butch Borasky, are slated to be recommended at Tuesday’s county commission meeting, where Nye County Code 9.20-prostitution will be addressed. The board will recommend that the business impact statement presented be accepted by the board, to be finalized at the Sept. 20 commission meeting.

The proposed provisions will duplicate or are more stringent than federal, state or local standards regulating the same activity.

“A group of us did work on that to bring it up to current standards,” said commissioner Borasky. “There were some additional things added in there, according to what the sheriff wanted.”

Various sections of the prostitution ordinance were amended, including adding wording that obtaining a license to work in a brothel is a privilege; amending license issues; amending emergency suspension by the sheriff; amending suspension or revocation of licenses, among other changes.

“One of the biggest changes was being more clear on the ownership, that everybody that has a financial interest in a brothel had to be identified,” Borasky said. “That was one of the things I was concerned about.”

A meeting was held between some brothel owners and commissioner Lorinda Wichman to hash out any differences. The county requested that the owners send their recommendations in writing after that meeting, and as of yet none have been received.

“I was asked to meet with Ken Green and his attorney and a couple of other people involved and they wanted to talk about some of the proposed changes and they had some suggestions that will make it more palatable to them,” Wichman said. “We told them to put their suggestions in writing and bring them back to us.”

Despite that, Wichman said they will have up until the Sept. 20 meeting to submit their writing proposals.

The proposed rules on the brothels will include both adverse and beneficial economic benefits.

Various licensing fees will increase, costing brothels more money depending on the number of prostitutes they have at their establishment.

Also rising is the quarterly registration fee a brothel worker must pay, jumping from $125 to $150.

In addition, there will be a section added assessing tiered penalties for violations of the ordinance.

Revenues for the fiscal year 2016-17 for both licenses and work cards have been budgeted at $75,000. The number was derived by adding up the number of active brothels (five) which equates to revenue increases of $9,250 per quarter and number of current active work cards for brothel workers (121) which the county anticipates seeing increased revenues of $5,525 per quarter.

A beneficial effect of the amended ordinance is that the board may issue temporary licenses to applicants for a specific period of time, entitling the person named on the application to work at a brothel for profit.

A direct effect of the adjusted fees and enhanced licensing requirements is that stricter controls and oversight of brothels will be possible.

An indirect effect of the changes will be that the fee increases will lead to increased revenue, which will go toward costs associated with background checks and investigations and increase revenues going to the county’s ambulance fund.

The county said that the continued existence of the brothel industry is dependent on public confidence and trusting that licensed prostitution is carried out honestly and competitively, while operating free of criminal and corrupting elements.

The board explained that public confidence and trust in the brothel industry can only be maintained by strict regulation of all persons, locations, practices, associations and activities related to the operation of a licensed brothel.

Those regulatory practices include the necessity for background and investigative fees and the assessment of fees and fines to ensure compliance with county ordinance and state law.

There will be an excluded persons black list section added, which will prohibit some customers from patronizing a brothel.

The annual cost to the government for the enforcement of the proposed changes will be neutral due to the increased fees and the providing of stricter internal controls of the brothel industry.

In addition to the proposed changes being recommended at the meeting, an investigation by the Nye County Sheriff’s Office into two brothels for illegal advertising will be recommended by the board.

The Chicken Ranch and Area 51 are the pair of brothels in question.

“I believe we have some violations presently about billboards that the state does not allow,” Borasky said. “There’s some unclarity on that, so we cleaned that up as well, so that people that are actually advertising for prostitution will stop doing that, because that’s not allowed.”

Borasky said he is not sure if charges will be brought against the owners of the two establishments, as that will be left up to the sheriff’s office.