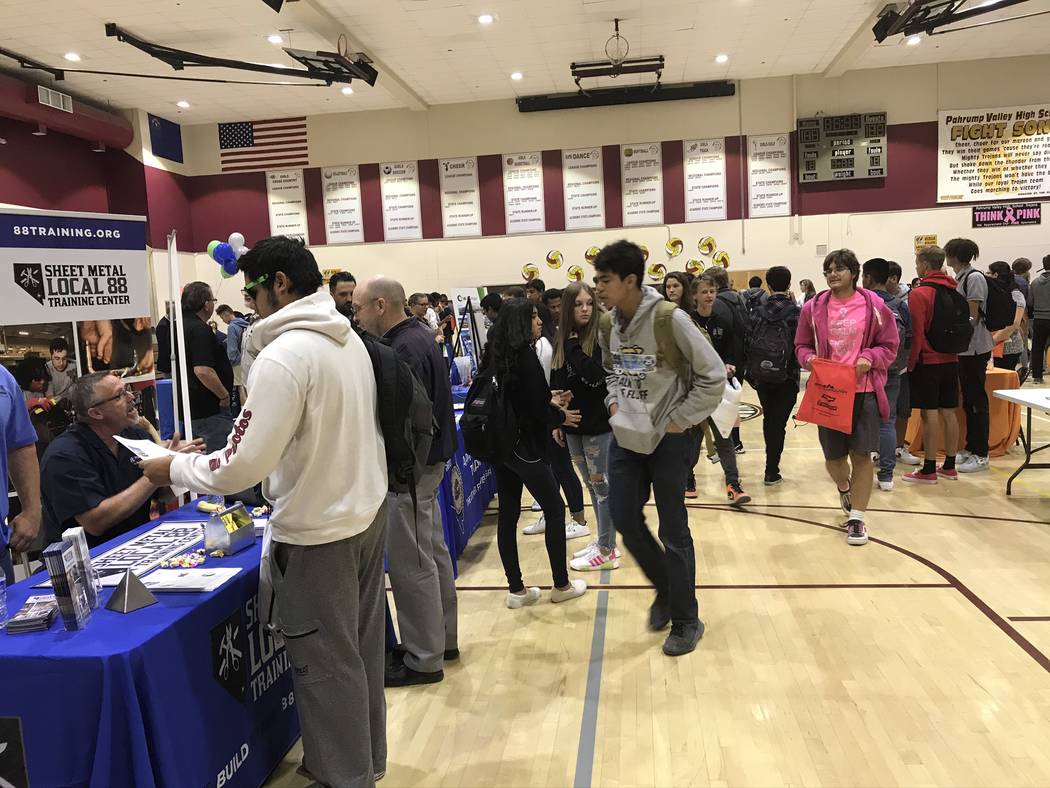 Jeffrey Meehan/Pahrump Valley Times Students make their way through the line of employers, universities and others at the college and career fair at Pahrump Valley High School on Oct. 17. This is the sixth year of the event in Nye County. 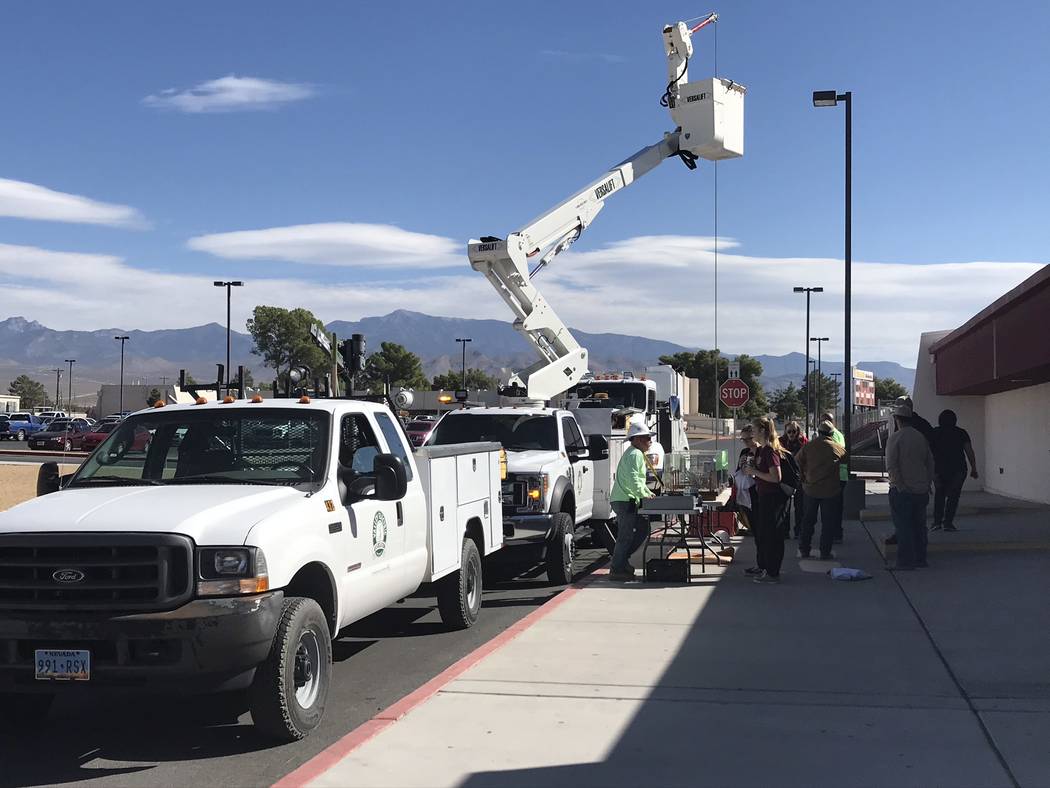 Jeffrey Meehan/Pahrump Valley Times Valley Electric Association Inc. set up shop with a display outside the college and career fair at Pahrump Valley High School on Oct. 17. The co-op also had a booth inside the high school's gymnasium where it was giving out information on its scholarship and internship opportunities. 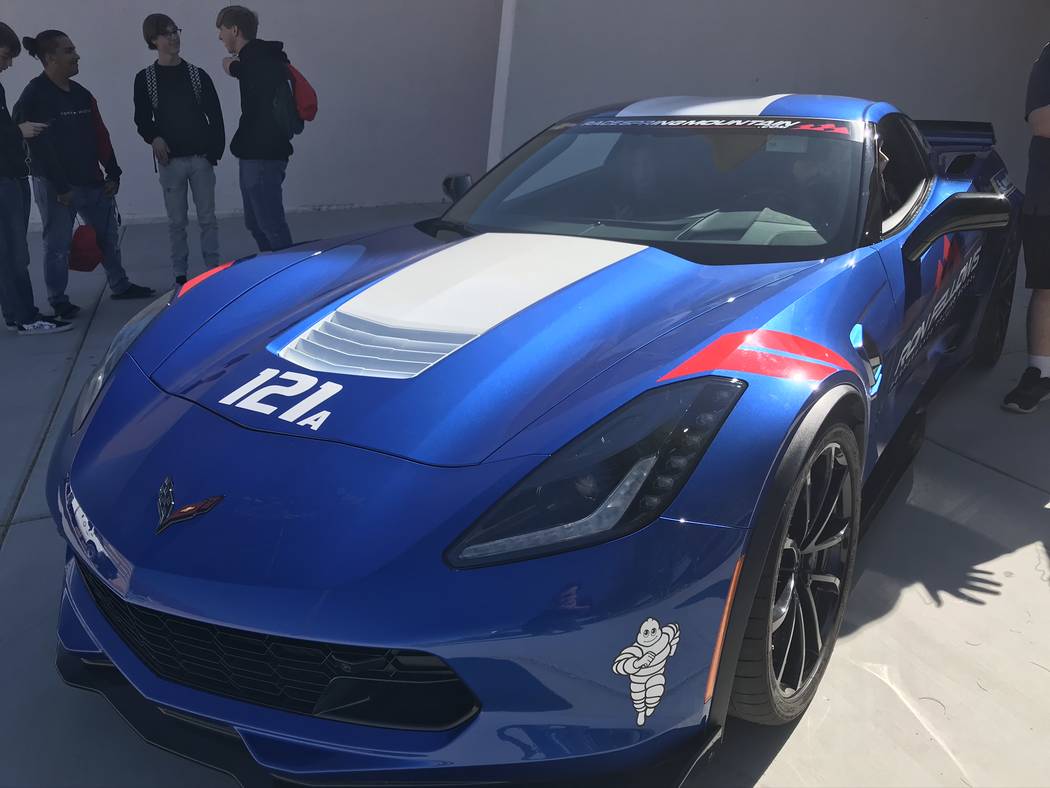 Jeffrey Meehan/Pahrump Valley Times Spring Mountain Motor Resort and Country Club sets up shop at the college and career fair in Pahrump. The half-day fair was on Oct. 17. 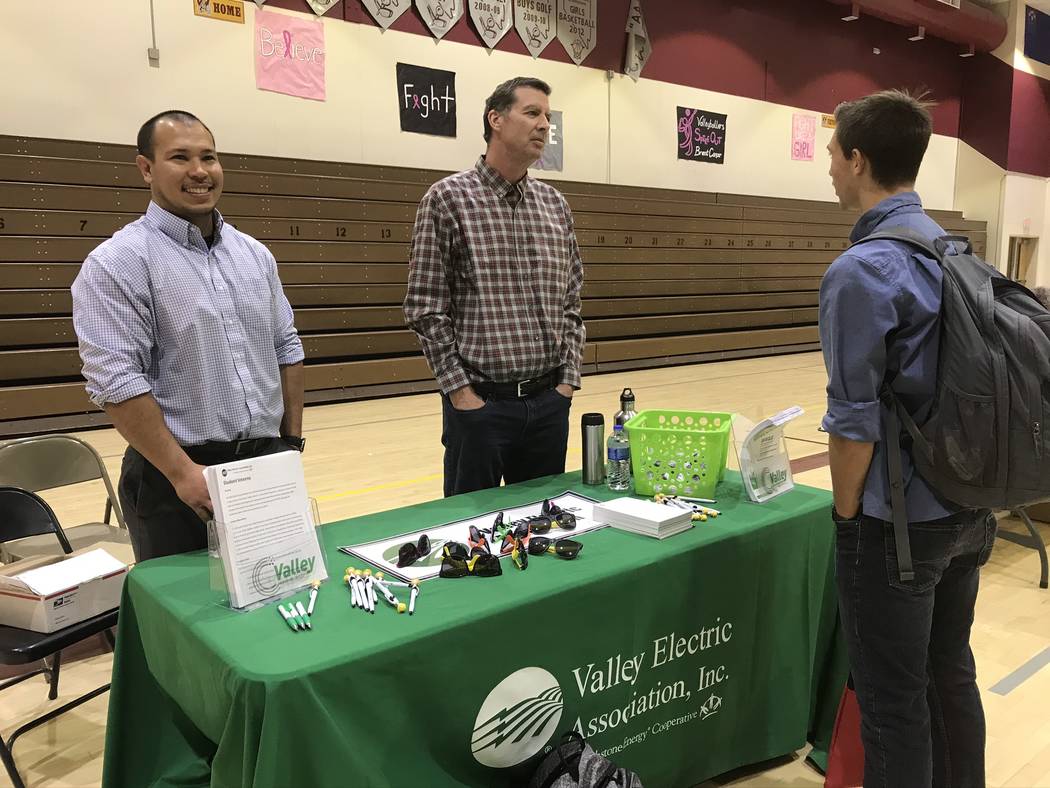 Jeffrey Meehan/Pahrump Valley Times Valley Electric Association Inc. passes out information about its internships and scholarships during the college and career fair at Pahrump Valley High School on Oct. 17. 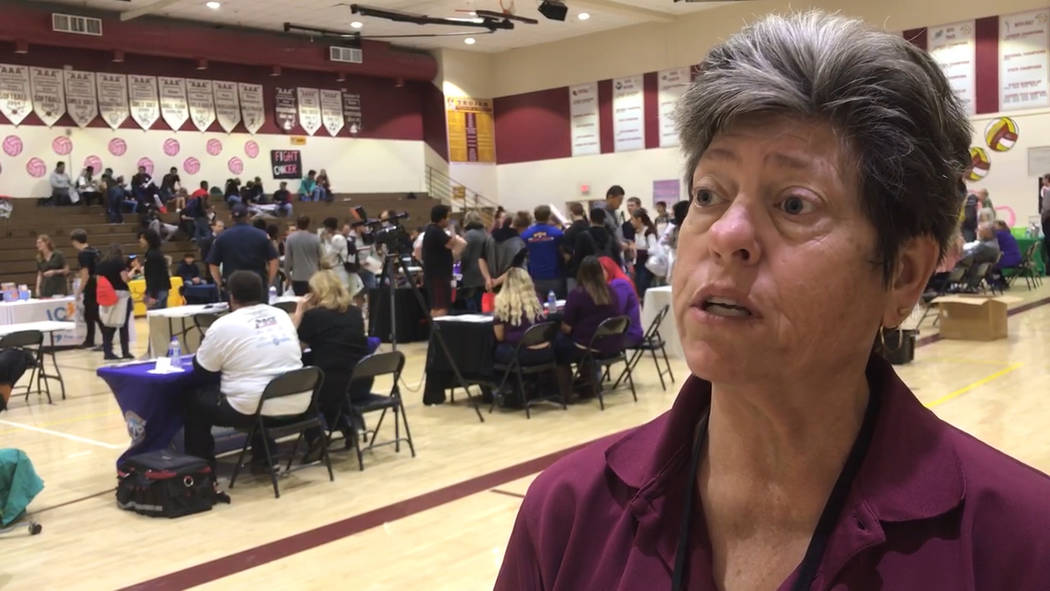 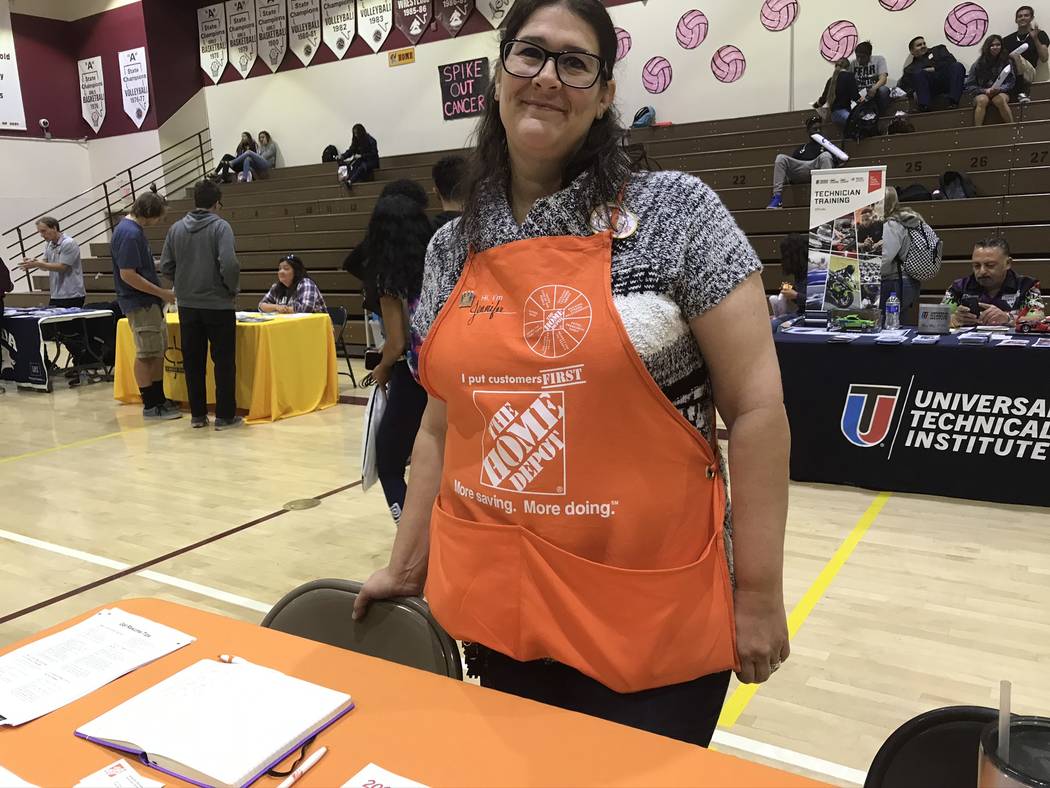 Jeffrey Meehan/Pahrump Valley Times Jennifer Woeger Riendeau of the Pahrump Home Depot represented the area store at the college and career fair at Pahrump Valley High School. The fair was on Oct. 17.

The college and career fair gave area students an opportunity to connect with potential employers, colleges and military recruiters for the sixth consecutive year.

The half-day event at Pahrump Valley High School in mid-October attracted dozens of students to meet with major colleges and universities such as the University of Nevada, Las Vegas, northern Nevada universities and major employers in the Pahrump region, including Valley Electric Association Inc., Spring Mountain Motor Resort and Country Club and several others.

“This year, we have a few new participants, and we have some of our faithful ones that have been coming for six years,” said Lisa Hamrick, Work-Based Learning coordinator at the Nye County School District. “And to take time out of their busy day from their offices and their businesses to come here and offer this to the students is just a fabulous opportunity for them, so we’re very appreciative of that.”

Hamrick produced the event with the assistance of the 12th-grade counselor Carlah Luck, though not everything was the same this year.

The Nevada GEAR UP (Gaining Early Awareness and Readiness for Undergraduate Programs) ended last year, so they weren’t able to bus kids from Tonopah and Beatty in for the event this year.

Hamrick is hoping to remedy that next year with funding from a GEAR UP grant or other monies.

Valley Electric Association Inc. had a booth set up at Pahrump Valley’s fair.

“It looks like a really great turnout for the career and college fair today at Pahrump Valley High School,” said Candace Perkins, marketing manager at Valley Electric. “At the Valley Electric table, we’ve been sharing information about our student internship program, which is for high school students, either for seniors or that have graduated within the past year.”

Valley was also sharing information about its scholarship program at the booth. The co-op offers a list of scholarships for continuing education, trade and vocational and for four-year colleges.

More information can be found at vea.coop

Fronk said that the internship is paid at Valley, where many companies don’t offer a salary to interns.

Fronk is planning to become a lineman for Valley after graduation.

“I found out a lot of information that I liked about it,” he said. “It’s only three months of college, and then I start getting paid…”

“We hire a lot of the high school kids because we’re one of the few that hire at 16, so we do try to work around school schedules,” said Jennifer Woeger Riendeau of the Pahrump Home Depot at the career fair.

For high school students or minors, Home Depot recruits them for cashiering, lot and the garden center, she said.

All other positions require that a person be over 18 years of age.

Some changes have come for Hamrick this year as well.

She was formerly the Nevada GEAR UP site representative at Pahrump Valley High School. But the grant has ended, she said.

“Right now, we don’t have a GEAR UP program,” Hamrick said. “The grant ended last year, and they’re in the middle of refunding it. It just hasn’t started yet.”

Over the past several years, Hamrick worked for GEAR UP to bring the college and career fair, with the first three years held in Beatty. Hamrick said that made things easier for Beatty and Tonopah students to attend.

“We were centrally located for all three of us,” she said.

The fair was shifted to Pahrump three years ago.

“About three years ago we decided that we had so many businesses from Pahrump that we would just ship Beatty, transport them in, Beatty and Tonopah, so that’s what we did, and they were able to join us,” Hamrick said.

Without the GEAR UP grant, Hamrick said they weren’t able to bus the kids from Tonopah or Beatty to the fair.

She’s hoping to remedy that next year with funding from a new GEAR UP grant or other funding.

Hamrick currently works out of the Nye County School District office for the Work-Based Learning Program.

“It’s a brand new grant, state-mandated, and it’s more about gearing the kids for work skills, so I’m very proud and happy to be working for this new program, but it also ties into the businesses and the college and career fair, so it was just the perfect segue to work with Carla again this year to offer this for our students.”

The Work-Based Learning Program grant is set to go on for several more years, according to Hamrick.

“…when the GEAR UP grant gets funded, we’re hoping it’s by January so that they can also come in, and I will work very closely with them again because it’s kind of a hand-in-hand type of thing.”

Hamrick is looking to create new partnerships with the local businesses in the area working under the Work-Based Learning grant.

“What we’re going to do is we’ll take the students, and we will vet them and talk about what they would like to do, and we’ll start off maybe with job shadowing,” she said. “I’ve had a lot of businesses that have been very willing to participate in this and to partner with us. And then it might even turn into an internship or a part-time job or a career.”

Hamrick continued: “Either way, these kids are going to have the skills to go out into the workforce once they graduate, and they move on, they will know some of the basics,” she said.