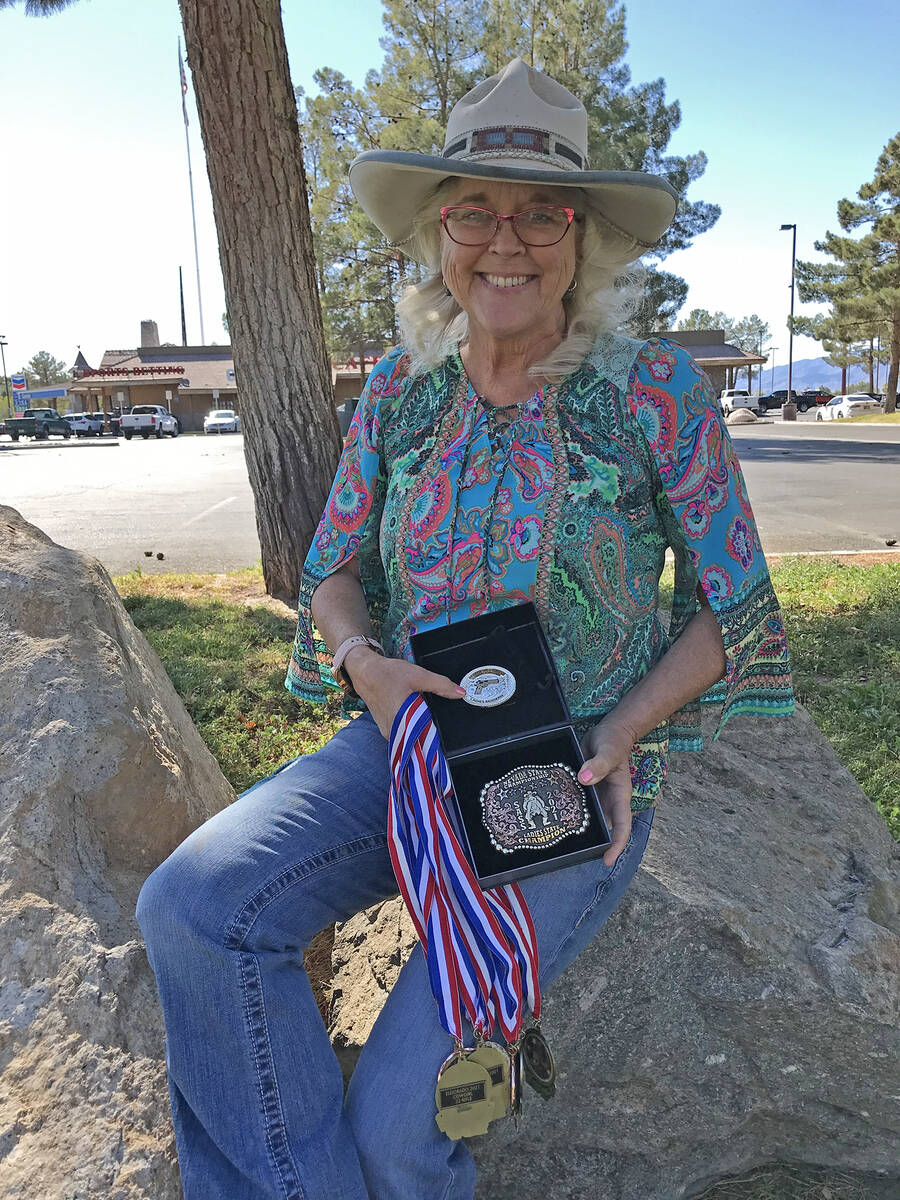 Robin Hebrock/Pahrump Valley Times Debra Strickland is pictured posing with her SASS Nevada State Champion Belt Buckle and various other awards she won during the competition held in early October. 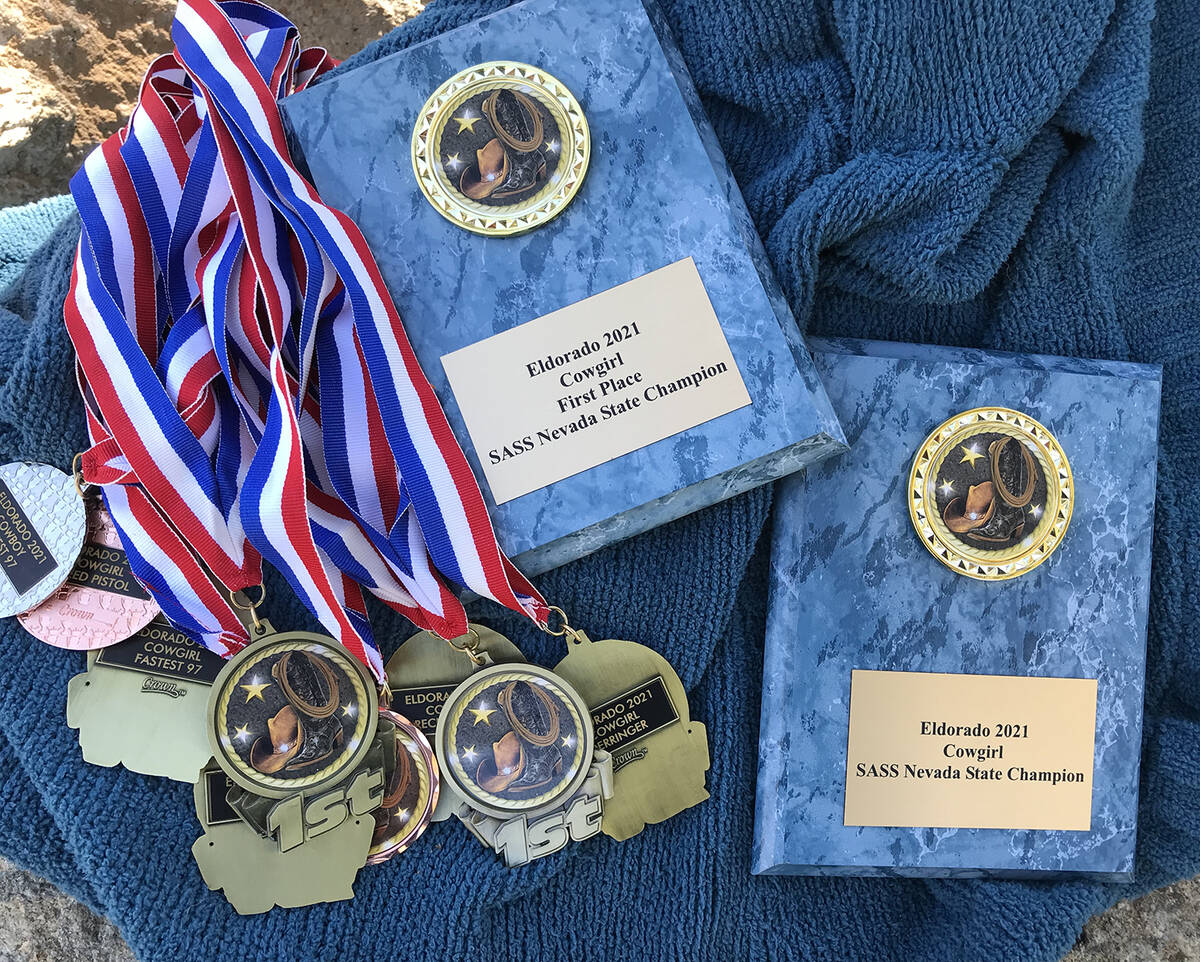 Robin Hebrock/Pahrump Valley Times Numerous medallions and plaques were presented to Debra Strickland during the SASS Nevada State Championship for 2021. 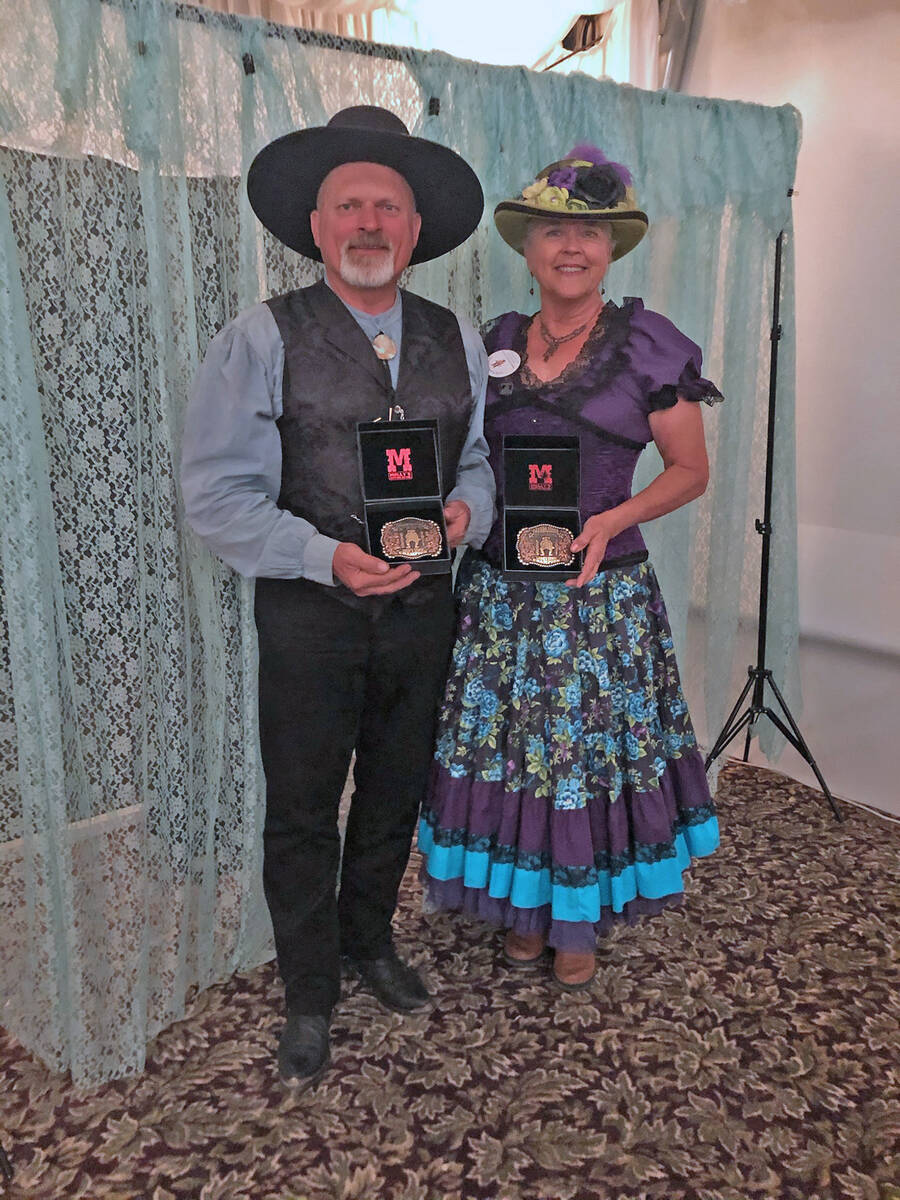 Special to the Pahrump Valley Times Debra Strickland, at right, goes by the alias of "Penny Pepperbox" when competing in Single Action Shooting Society events and she can be seen posing alongside the 2021 Nevada State Men's Champion, alias "Quickly Down Under".

Strickland, who is the current chair of the Nye County Commission, has shown herself to be an advocate for Second Amendment rights but she doesn’t just strive to protect those rights, she actively exercises them too. With a keen eye and a quick hand, Strickland is an enthusiastic sports shooter and her talents have officially earned the title of the fastest cowgirl action shooter in Nevada for 2021, not to mention more than half-dozen other awards, following the Single Action Shooting Society’s Nevada State Championship.

Taking place the first weekend of October in Boulder City, the “SASS” Nevada State Championship was hosted by the Eldorado Cowboys, one of several single-action shooting clubs located in the Silver State. Strickland said she was delighted to be able to take part, and absolutely thrilled to have walked away from the fun and action-packed weekend with so many claims to shooting fame, including the ever-coveted first place belt buckle that proclaims her prowess as the fastest firearms female in the state.

“I competed in the cowgirl category, which is a category that any age group can shoot,” Strickland told the Pahrump Valley Times. “I could be shooting Ladies Senior, I could be shooting 60 and older, there are a lot of categories we could choose from but Larry (Strickland’s husband) and I have been signing up as cowboy and cowgirl lately, because I thought it was cute and I just liked the way it sounded.”

Strickland noted that she and her husband are far from novices when it comes to sports shooting, with the duo taking up single-action shooting as a hobby in 2000 when the Pahrump Cowboys still utilized the shooting range that used to be located at Longstreet in Amargosa. That group has unfortunately since been disbanded but it is one that Strickland hopes to revive once a new shooting range is constructed in Pahrump.

With a full 21 years of single-action shooting to feather her hat, Strickland is the proud owner of dozens and dozens of shooting awards and this year’s state championship only added to her collection.

Providing an overview of the October competition, Strickland explained that these types of matches are not as simple as grabbing a gun, taking aim and firing; they are carefully organized and controlled productions with rules regarding how and where to load and unload the weapons, the order in which the targets should be fired at and which kind of firearms need to be used for the various targets. Even certain lines are incorporated into the matches, requiring competitors to get into character and shout out key phrases as they make their way through each stage.

From an outsider’s perspective, it is a very theatrical performance and Strickland noted that this element brings quite a lot of fun to the competitions, but that sense of drama in no way lessens the gravitas of the events or the pride of those who come out on top.

The SASS is a worldwide organization with many thousands of members and Strickland noted that the state championships in Nevada are typically limited to just 250 competitors but this year, there was no need to enforce that limit because the number of participants was less than half the allowable total. Strickland said she had a pretty good idea as to why that might be.

“People are worried about using up their ammo,” she remarked, adding that this is due, at least in part, to supply chain issues as well as the current political climate.

Despite the hesitation some have when it comes to using their ammo for fun, there were still around 100 competitors in the 2021 championship, all of whom were divided up into posses, each with its own posse marshal, and directed to make their way around to the various stages created for the event.

“It’s very cool, this is always so much fun,” Strickland said with an enormous smile spread across her face. “At a large match like this, they have the awards where you get to show up in your finery. I prefer to wear a corset, hat and a Old West-style dress for that banquet, where the awards are handed out and you get to finally find out who the winners are.”

When the results were announced that night, Strickland found herself the proud owner of a brand new belt buckle emblazoned with “Ladies State Champion” but that was not all. Outside of the main competition, there was an array of side matches at the championship and Strickland came away with a first-place win in several of these, including fastest for Derringer, 97, 22 pistol, 22 rifle, long-range rifle, long-range pistol and more. “Those side matches are all the trophies available for the first day and it’s kind of like a warm-up, to get you into the flow of things and help you familiarize yourself with how the host club does their array of targets and what their rules are,” Strickland detailed.

Now that she is a state champion once again, Strickland will need to keep her skills honed over the coming 10 months so that she is ready to go to the regional championships set for August, 2022, where she will proudly represent the state of Nevada.