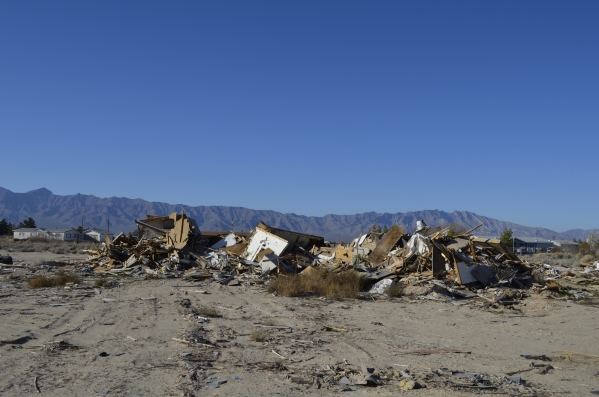 A Pahrump construction company will do the cleanup of a 10-acre former mobile park property that was declared a nuisance.

In a unanimous vote, Nye County officials on Dec. 15 approved a bid from Ron Murphy Construction Inc., in the amount of $22,940, which includes tipping fees that will be taken out of county’s contingency fund.

Officials received numerous complaints from nearby residents who said debris from the site blows into their yards with the wind.

Nye County Commissioners approved the plan at the Jan. 21, 2014 meeting to proceed with abatement procedures, however the county lacked the funding for the cleanup.

Nye County Manager Pam Webster earlier said the county had tried to fund the abatement by selling scrap metal off the property but received only $2,500 for the material.

Since the meeting in August where officials reserved $20,000 for the project, Nye County received two bids for the project including Ron Murphy Construction, Inc. Another bidder, C&S Waste Solutions of Nevada quoted the county $24,350 for the work including tipping fees.

The contingency fund had $64,752 available prior to last week’s meeting and was reduced to $41,812 after commissioners approved the bid.