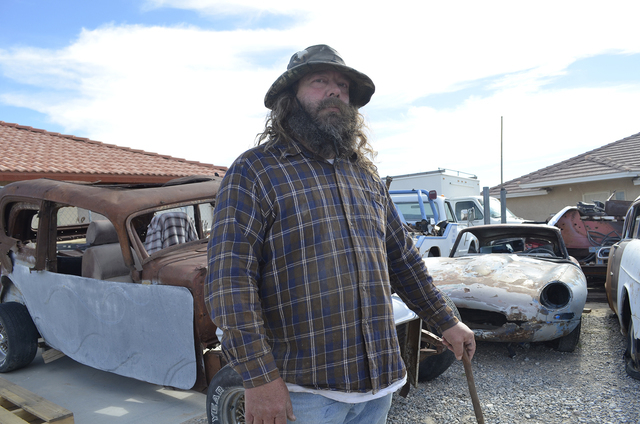 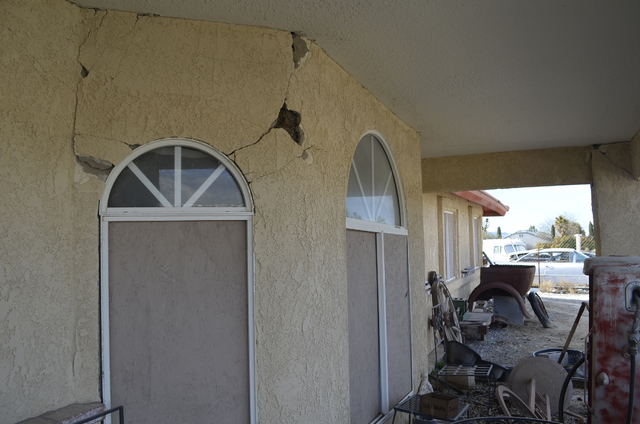 What was meant to be an artful display in one of Pahrump’s front yards turned into a nuisance, but the owner of the property said it had been never been his intention.

Jim Brooks, a self-proclaimed car enthusiast, had amassed a collection of various cars and machinery in his yard located at 2421 Hacienda Street in Pahrump, drawing attention from neighbors and authorities.

“The ideal was to have an artful front yard that people stop and take pictures of,” he said.

Although his assortment of cars may look like a pile of junk to some, Brooks argued that it has historic value. He said the infamous Scotty from Death Valley Scotty’s Castle used to ride in a Packard that sits on his property. Other historic cars include an old Dodge that used to be a postcard for Rhyolite, a Nevada ghost town.

Brooks’ idea was to have an exhibit made of a “western area,” a tribute to World War II, the flamboyant 50s’ and a car chase culminating into a crash. But as his retirement failed and health declined, he had to shelve the plan, leaving the front yard in disarray.

Brooks’ neighbors were less excited about the idea. The nuisance complaint, filed by Ron Vance and Kathy Weill, said Brook’s yard was “a total blight to the neighborhood.”

Vance and Weill also said the nuisance had significantly decreased the value of their properties. In a complaint, they argued that Brooks’ property turned the neighborhood into a eyesore and “junk pile for old pieces of scrap metal, tires, wood, bricks, a woodshed, simulated headstones in a graveyard, a 50-foot bus and other items too numerous to mention.”

Since Vance and Weill brought officials’ attention to Brooks’ property in 2015, things had gotten only worse, they said in the complaint.

In February, Nye County commissioners gave Brooks 30 days to come up with a plan to clean the property and 60 days to implement it. Brooks recently fenced off his property and although commissioners didn’t require the aesthetics, he wants to make it “look pretty” for his neighbors.

His next step is to move all of the cars into the backyard. Most of the vehicles are just artwork for him, but Brooks plans to fix them up since they have sentimental value.

Near the would-be display sits a large bus in which Brooks has been living for 20 years. The “decked-out”machine as he described it, has a marble jacuzzi in the middle, a library and kitchen. The bus however doesn’t have any air conditioning and Brooks said it gets ungodly hot in summer.

Brooks purchased the house for a mere $1 several years ago after the previous owner sought to get rid of it because of the crumbling foundation. The house is beset with cracks, has no water or electricity. Brooks only uses it as storage.

In an effort to prevent the house from collapsing, Brooks has put 16 semi-loads of dirt, some concrete under the ground and a beam across the front of the house. He also propped up the beam by posts coming out of the concrete pillars.

While Brooks blamed bad soil on the problem, he said most of the nearby houses have the same issue.

Brooks is a U.S. Air Force veteran. His disability prevents him from fixing his cars and doing much work around his property, the only thing that he can fall back on.

“It’s just one thing after another. It’s just a domino effect. Once you start going down, you go down,” he said.

For now, Nye County commissioners left the house alone, a move that Brooks describes as a “big plus,” after he was scared of losing the place and ending up on the streets.

By fixing and selling his cars, Brooks hopes to recoup some of the money and get out of the poverty that he has been living in.

“That’s the reason why I have all of the old trucks out back because that’s the first thing I was going to go and (fix),” he said.

Brooks said he is thankful for the help that poured in after his appearance at the commissioners’ meeting. Someone put $200 in his mailbox and he also got $100 from one of the neighbors.

“People are coming forward with stuff, which is beautiful,” he said.