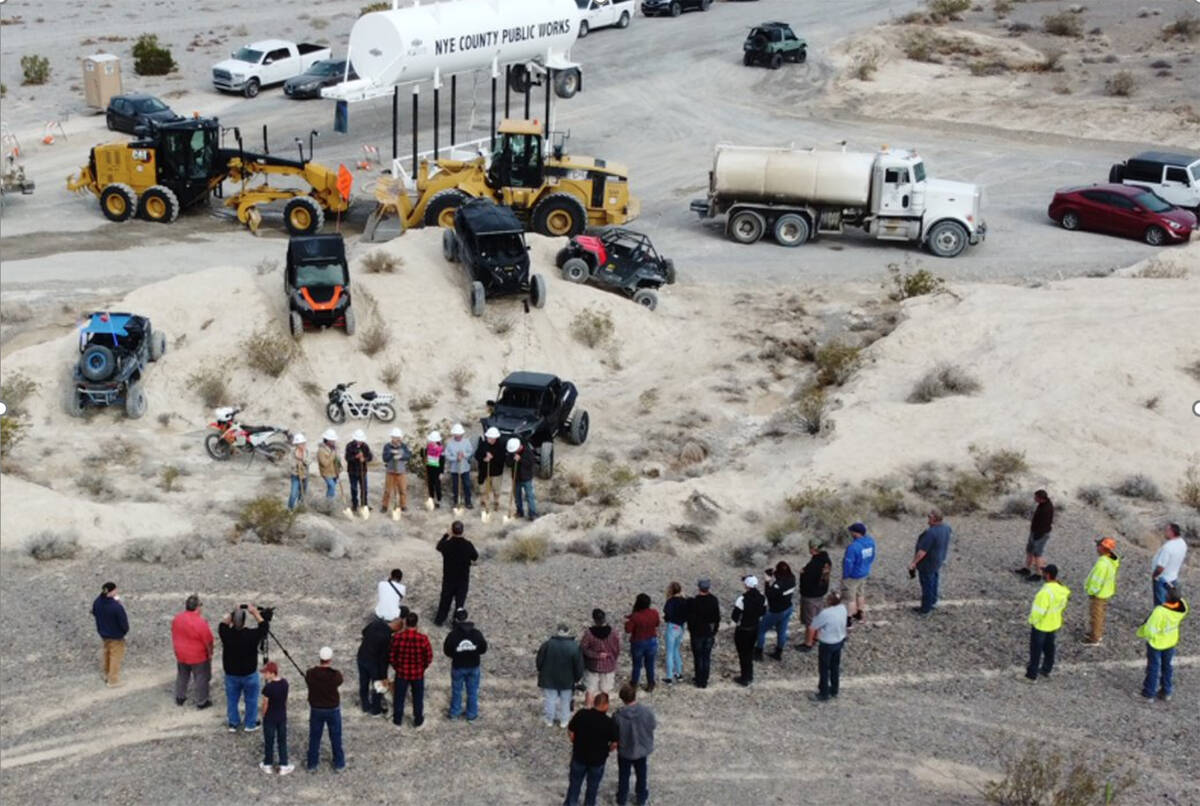 Special to the Pahrump Valley Times The Pahrump Fairground OHV park groundbreaking took place in March and this is just one of the many elements officials hope to incorporate into the site. 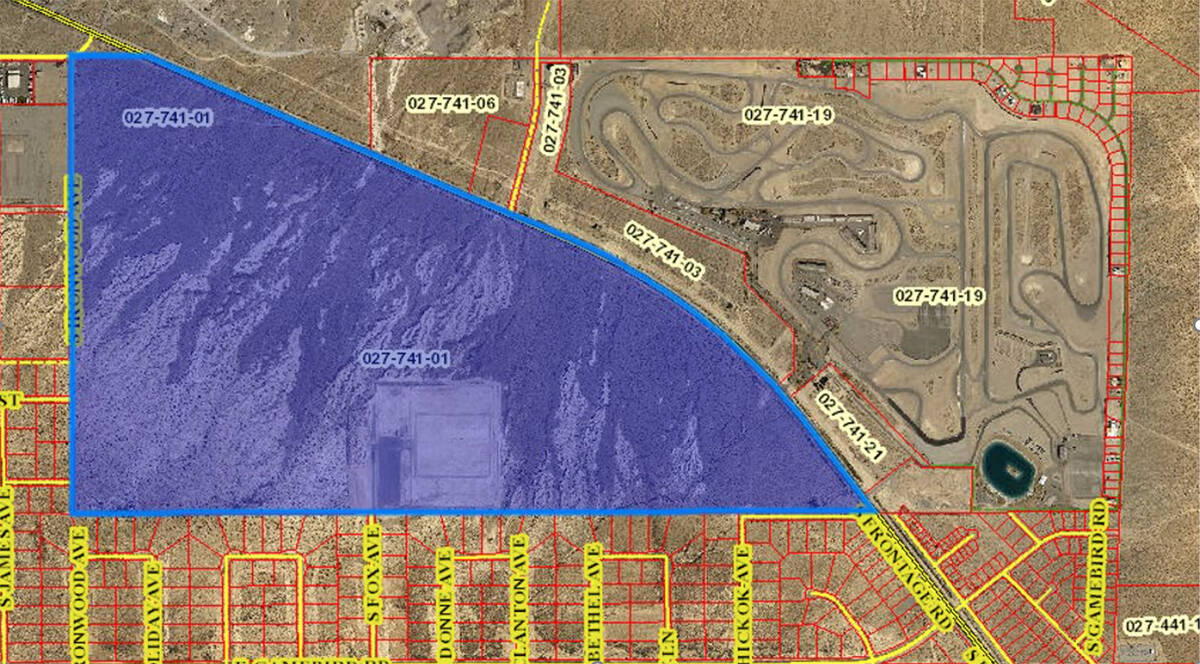 Special to the Pahrump Valley Times This map shows the borders of the Pahrump Fairgrounds, which is bordered by Highway 160 to the north and east and Ironwood Avenue to the west. 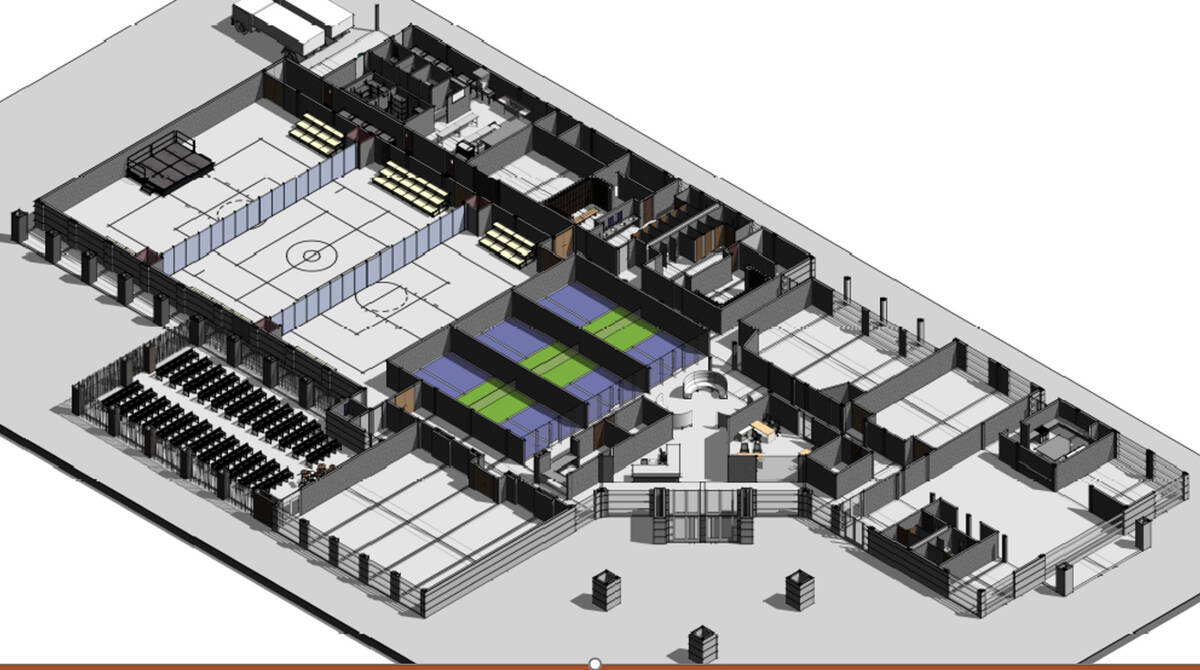 Special to the Pahrump Valley Times This rendering shows a concept for the community/convention center at the Pahrump Fairgrounds.

The update was part of the Pahrump Tourism Advisory Committee’s May 12 agenda. Each of the committee members appeared excited by the progress thus far. With tourism the committee’s No. 1 priority, the potential for increased visitation that the fairgrounds represents had members expressing their readiness to do whatever they can to help the project along.

Sutton began by giving an overview of the history of the fairgrounds, which totals 427.24 acres bordered by Highway 160 to the northeast and Ironwood Avenue to the west. The town of Pahrump acquired the property in Sept. 1999 through a congressional land patent. That land patent came with certain restrictions, he explained. The existing rights of way on the land were to remain and any rights to mineral deposits that might be found there belong to the federal government.

In addition, there is a reversionary interest clause that states the land cannot be sold or transferred and must be used as indicated by the original development or management plan. Sutton said this was a key point because the town and county are in the process of trying to have that clause set aside.

“Some of the contemplated uses at the time that we applied for this land were: a rodeo arena; equestrian trails; ball fields, and that included soccer, softball, little league and basketball; a 9-hole golf course, which surprised me because I had never realized that was in the plans; an indoor recreation and convention center; a roadside rest stop; a firearms training complex; and an archery range,” Sutton reported.

He walked the committee through the various iterations of the fairground’s layout, ending with the current proposal. That concept shows an OHV park, which is now under construction, as well as ball fields, multiple parking areas, an arena with corrals, and even a 40-acre aerial park for hot air balloons and drones, all of which can fall into the originally proposed use.

The one element of the current proposal that is not allowed per the federal land patent, however, is commercial development and this is something officials are keen to change. A large portion of the fairgrounds land fronts Highway 160 and if used for commercial purposes, it could bring in quite a bit of cash.

Sutton said Nye County had recently submitted a Congressional Lands Bill package to the Nevada delegation asking for various actions, one of which is the removal of the reversionary interest clause. “Once removed, the path would be clear to begin commercial development along the highway to provide a source of revenue for further buildout,” the presentation stated.

When asked what the committee could do to assist in the county’s request, Sutton said the most effective thing would be for each member, as well as local residents, to reach out to their congressional representatives to express their support for the county’s lands bill.

Another major feature of the fairgrounds that officials have been striving toward is a new community center-type facility.

“We were excited a couple of years ago when Valley Electric decided to do a transmission line sale and as part of the means of incentivizing their members to sign off on that, they said that they were going to put $5 million toward the community center,” Sutton said. “That was a prior board and a prior CEO and since then, the board has changed and the CEO has changed and they decided to go back on that promise. But in the meantime, we took them at their word and went ahead and developed plans for a community center.”

Sutton showed the committee a rendering of the community center, which is set to be situated near the existing fireworks shoot site parking lots and four of the eight planned ball fields. It would be an approximately 27,000 square foot building that could be used for all kinds of community, public and private events, he said. Plans include include a commercial kitchen, various sports courts and an adjustable layout that could hold sizable meetings or be portioned off to form smaller breakout rooms.

The elephant in the room when it comes to building a community center is, of course, funding. Nye County Commissioner Debra Strickland, who acts as a liaison to the tourism advisory committee, said the county had estimated a cost of about $6 million for the community center, of which American Rescue Plan Act monies will provide $2.4 million. A further $1 million has been pledged through Congressman Steven Horsford. This means the county will need to find funding sources to support the remaining $2.6 million and the committee members could play a vital role in securing said funding by identifying grant resources that could be used for those costs.

To date, extensive grant funding has already been utilized for the fairground development. Extensive Community Development Block Grant funds have been secured for the project, with $1,233,175 allocated from that program so far. Block grant monies are being used for the water and well system and the sewer and wastewater system, as well as having been put to use for the environmental assessment, the drainage study and flood control design plan and a detention basin.

Once completed, the town and county are hoping the Pahrump Fairgrounds will become a true centerpiece of the community that will draw not only locals but a plethora of out-of-towners to the area.