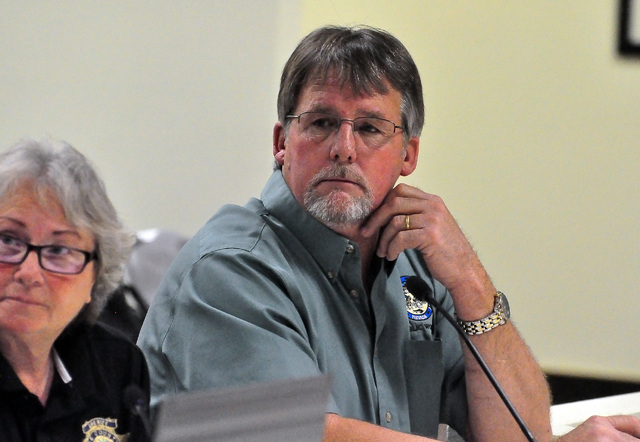 Nye County officials found a happy medium when trying to figure out how to fix one of the busiest roads in Pahrump.

The Nye County Department of Public Works will spend $550,000 to “superpave” the crumbling portion of Bell Vista Road that stretches east from the California state line for 5.5 miles.

Nye County Commissioner Dan Schinhofen said in the meantime, officials will “actively” seek grants to rebuild Bell Vista Road to make it “the road it needs to be.”

“The base on this thing is junk. It needs (to be) totally rebuilt. We are talking millions to get it done,” he said.

Nye County Department of Public Works Director Dave Fanning said some other options for remediating the road are patching and repaving. To repave the 5.5 mile stretch of the road, officials would have to spend $500,000 per mile.

Superpave is an inch-and-a-half overlay over the surface of the road. The measure would buy approximately 8 to 10 years before officials have to tackle the problem again, Fanning said.

So far, the Nye County Department of Public Works already burned through $100,000 while fixing Bell Vista Road, which sees some of the highest traffic in Pahrump.

The county has 2,747 miles of roads, including bridges. Officials initially wanted to patch Bell Vista Road, but changed the decision after Fanning voiced safety concerns.

Nye County commissioners approved weight restrictions for Bell Vista Road at the April 15 meeting after the increased vehicular and heavy construction traffic had caused the road to deteriorate. Local deliveries of up to 13 tons have been allowed to traverse the road.

“If we actually restrict this thing to 13 tons for the next year, you got enforcement that you are going to need on it. And I know the sheriff’s office is actually helping us out extensively in doing that in writing tickets,” Fanning said.

Fanning said prior to fixing the road, the Nye County Department of Public Works will have to replace the culverts.